GOP's Support of Conversion Therapy Is a 'Death Sentence'

Conley is the author of Boy Erased

A little over 12 years ago, my “ex-gay” counselors at Love in Action, a now-defunct gay conversion therapy facility in Memphis, Tenn., employed language that is currently being echoed in the Republican National Committee’s suggested platform planks. “Our country’s freedom is under attack,” my counselor said. “Those godless liberals don’t care about the American family. They want to separate you from your loving parents.”

According to the conservative Family Research Council’s Tony Perkins, the five states that have banned conversion therapy for minors “are trying to restrict what parents can do for loving their children.” Perkins’s language has made it into the proposed GOP platform, supporting “the right of parents to determine the proper treatment or therapy, for their minor children.”

Meanwhile, Donald Trump’s running mate, Indiana Governor Mike Pence, a politician with a history of referring to HIV treatment as “needy,” has given his support to “those institutions which provide assistance to those seeking to change their sexual behavior.” The GOP platform’s original draft also claims that the Obama administration’s support of LGBTQ individuals is an attempt “to impose a social and cultural revolution upon the American people.”

As a preacher’s son who survived the bigotry of conversion therapy after spending a childhood in my father’s fundamentalist Baptist church, the GOP’s language is not shocking. Attacks on queer lives—whether intentional or unintentional—are often coded in abstractions such as “love,” “protection,” and “freedom”: concepts whose hidden realities are anything but life-affirming.

My loving parents, and their loving friends in the church, believed they were protecting me from a life of brutality and freeing me from an afterlife in hell by sending me to Love in Action. Their love, though previously unconditional, took the form of an ultimatum: either attend “ex-gay: therapy or risk losing family, friends and the God I had prayed to all of my life.

If parents have a better idea about protecting their children than legislators, as Perkins has claimed, then a child’s rights are contingent upon the whims of their parents’ highly subjective “protections.” The cultural message the GOP sends is clear: in privileging a traditional idea of family and church, the party has erased the individual.

Rates of LGBTQ homelessness, suicide and depression are larger in parts of the country where there are no protections for minorities. In too many places, it feels like queer lives are dispensable, a truth most recently evident in the GOP’s relative silence after the Orlando tragedy.

Under the guise of protection, my Love in Action counselors placed me in a group of people dealing with pedophilia, bestiality, and infidelity, referring to all of these “lifestyles” as “sexual addictions.” They subverted the Alcoholics Anonymous program to create a Twelve Step process promising to lead me “out of [my] sexuality.” They charged $1,500 a week for brainwashing tactics requiring me to narrate “sinful” moments in my life when I had thought or acted in a way that was not straight or “gender affirming.” They redefined my relationship with my father by asking me to look back on moments when I had not received enough “masculine-affirming” touch from him. They made me question everything I had ever experienced, erasing my personality in order to make room for a new, more lovable, “straight” version of myself. They did all of this, they claimed, in the name of love.

“Love is patient, love is kind,” my counselor said to me one day, quoting scripture in an attempt to explain why the love I felt for another boy was non-Biblical. “It is not selfish. Gays are selfish.”

In the decade that followed my time in conversion therapy, I lost grip on reality. I ended friendships and relationships without a second thought, entertained suicidal thoughts because I considered myself unlovable. When people claimed they loved me, I never believed them. My counselors taught me to hate the word, to mistrust anyone who said it to me. And though there are still days, over a decade later—when I can’t get out of bed because of the self-loathing it taught me—I have been one of the lucky ones.

I received an education that helped me come to terms with my gay identity. I read books that taught me the many forms love can take. I have loved and been loved. Other conversion therapy patients, however, committed suicide either during or after treatment.

When I hear the latest GOP platform language, I hear a death sentence. I hear a large portion of our U.S. populace ignoring LGBTQ lives just as they have ignored black and brown bodies. I see a group of people who at one point may have had good intentions—or believed they did—but have since lost their grip on reality and on humanity. I see people who have forgotten how to truly love. 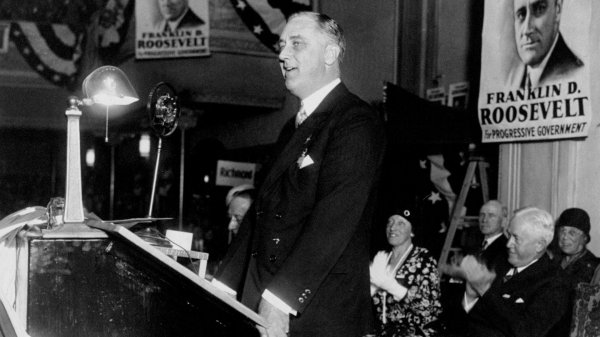 'I Accept This Nomination:' Watch the Presidential Nominees Through History
Next Up: Editor's Pick