The Most Expensive Xbox One S Will Ship On August 2

It seems only yesterday I was typing things about another slimline Xbox, the one that arrived six years ago with a then-capacious 250GB hard drive. We’re not three years into the life cycle of the PlayStation 4 and Xbox One, and Microsoft is already launching its Xbox One S, a 40% smaller powerhouse console that makes the default Xbox One’s desktop-PC-like footprint seem that much more monstrous by comparison. The company just announced you can have it for $400 on August 2.

What a difference six years makes: From 250GB of internal storage to 2TB, plus an infrared blaster (for interoperability with your other media center devices), 4K video playback support and High Dynamic Range (think better image quality by way of improved lights and darks), and an internalized power supply. It’ll also ship with a new Xbox wireless gamepad with textured grip and better Bluetooth range.

What it lacks in PlayStation 4 architect Mark Cerny’s sharp parallelogram-like contours, it makes up for in compactness and orthogonal austerity. Right angles on a whale-sized set-top sit more pleasingly on the same approach hit with a shrink ray. Contrast with the original NES (iconic by popularity and precedence, but aesthetically unlovely) and the just-announced NES Mini (oh so cute).

What of the cheaper $300 500GB Xbox One S the company announced at E3, or the $350 1TB model? Coming in December of this year, says Microsoft. Which is disappointing, since the only distinction between these shrunken Xbox Ones is hard drive size, making production line issue claims suspect. Plus you can use external hard drives with the Xbox One, making the $300 model arguably the most compelling of the bunch.

And with the Xbox One’s brawnier sibling, codenamed Project Scorpio, arriving in 2017, forcing enthusiast buyers to wait another five months to buy the Xbox One S they might prefer increases their financial burden by significantly decreasing the span between cash outlays–though its pricing remains under wraps, it’s safe to assume Project Scorpio won’t be cheap. 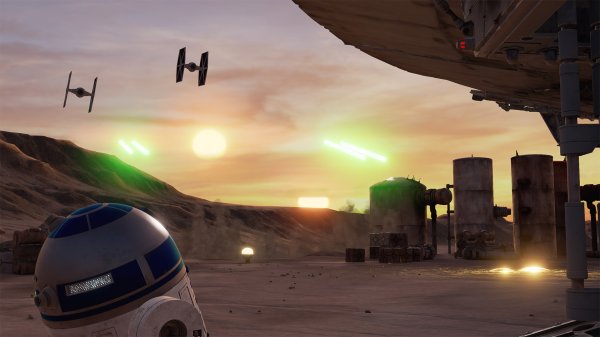 You Can Now Swing a Lightsaber in Trials on Tatooine for HTC Vive
Next Up: Editor's Pick