The Most Political Foods in America

Here’s a free tip for those running for office this year: Republicans should target fans of sweet and sour chicken, while Democrats should go after the Massaman curry crowd.

There may be more expedient ways to pinpoint sympathetic voters, but believe it or not, there is a high correlation between the popularity of these dishes and the politics of a given area, according to data provided exclusively to TIME by the online food delivery service Grubhub. An analysis of bulk ordering patterns from 187 congressional districts found that these two dishes are the ones most associated with the partisanship of a given district.

Of course, there’s a whole tangle of reasons for why these associations might exist, from cultural differences between voters to the regional popularity of different foods. But at a time when American politics seems more polarized than ever, it is some comfort to know that we can still all come together over a love of bacon cheeseburgers.

Methodology
Grubhub provided TIME with the number of times each of 175 dishes was ordered in 214 congressional districts, as well as the total number of orders in each district. For each district, the partisanship is measured as the average share of the vote going to Democratic and Republican candidates over the past two cycles (the only two since the House of Representatives was redistricted following the 2010 decennial census.) After removing districts with small numbers of total orders, TIME ran a correlation between the volume of orders (as a percent of all orders in that district) and the partisanship of the district, weighted toward districts with higher total order volume. The overall score is the total of the correlation coefficients for the 10 foods that the user chose, normalized to a scale of 0 (maximally Democratic) to 100 (maximally Republican). 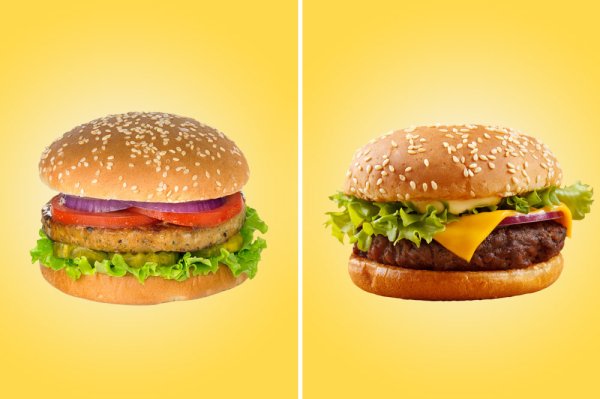 Do You Eat Like a Republican or a Democrat?
Next Up: Editor's Pick