As he claims the mantle of the Republican Party, Donald Trump will seek to soften the edges of a public persona sharpened by an adult life lived in full view of the New York media and honed on reality television.

The most unpopular major-party standard bearer in recent history, the real estate mogul is looking to show a more personal side, leaning on his family and a coterie of close friends as he makes his case for the presidency. At the same time, he’ll try to tone down some of the rhetoric and ideas that gained him a zealous following in the Republican primary even as they tarnished his image in the eyes of some general-election voters.

Released late Sunday after weeks of delay, the convention schedule is far more traditional than the fireworks — both literal and figurative — that Trump once promised. The speaker list is full of political leaders and conservative personalities who are familiar on the GOP speaker circuit, as well as a long list of people with the last name “Trump.”

“The plan for the Trump campaign for this convention is to help the American people to learn more about Donald Trump the man, not just the man they see on the campaign trail, but the breadth of the man himself,” said Trump campaign chairman Paul Manafort on Sunday. “Part of the historic nature will be the impact that family members have talking about the candidate.”

Trump’s four grown children — Don Jr., Eric, Ivanka and Tiffany — are set to speak, along with his wife Melania. In additional to plugging the businessman’s family enterprise, they are expected to provide testimonials about the presumptive nominee’s character and temperament when the cameras turn off.

Republican National Committee Chairman Reince Priebus has expressed hope in conversations with Trump and reporters that the candidate would show his softer side at the convention.

“If the public sees the Donald Trump that I’ve gotten to know in private, he will not be stopped,” Priebus predicted on Meet the Press.

But it is a big “if.” Party officials have come to rue Trump’s capacity for unforced verbal miscues and digressions leaving them less than confident that he can make it through the week without a misstep. But they are also mindful that Trump is at his most electric when speaking off the cuff and preaching to a roomful of acolytes. The convention is set to be more of an acoustic set. The inherent contradiction is still a glaring strategic question, with the party both encouraging the more “mature” Trump, while mindful that they risk losing his dynamism if he goes too far in that direction.

The impact of political conventions has been under steady decline for decades, but for a media-centric candidate like Trump, it could be more pivotal than any in recent memory. Trump himself has predicted record ratings, and aides say he recognizes that it may be his final opportunity for the universally known figure to rebrand himself in the nation’s eyes. Should he revert to his bombastic self before tens of millions of eyeballs, they fear it would be a wasted opportunity.

Trump has said he would use a teleprompter for his formal remarks claiming the nomination on Thursday night—the marquee event of the week, which is followed by the customary balloon drop. The move follows several cautious Trump speeches in recent weeks on everything from ISIS to global trade. But aides hinted that Trump would likely make more than one appearance in the Quicken Loans Arena, though it wasn’t yet clear if he would speak more than once. And even when reading off prepared notes, as he did when he introduced his running mate, Indiana Governor Mike Pence, Saturday, Trump has a penchant for going off script.

Asked whether Trump would appear more scripted at the convention in an effort to minimize the risks, Manafort balked.

“Donald Trump will be Donald Trump,” he said. “Scripted is the wrong word.”

Trump’s wife Melania is set to speak Monday evening, he will be formally nominated on Tuesday evening, and Pence will speak Wednesday night.

The family focus also betrays lingering tensions at the GOP convention. Mitt Romney and all of the Bush family — perennial top-tier talent — will skip the gathering in protest of Trump, with whom they have forcefully disagreed.

Conventions offer candidates unfettered opportunity to control their message to the public. But even the most carefully stage-managed events have run into problems.

During the 2012 Republican convention, Mitt Romney aides plotted an elaborate effort on the final night to show the true Romney, with testimonials from businesses and employees he helped turn around, family friends, and co-religionists. But the carefully scripted message, encapsulated in a moving video set to air just before he took the stage, was overshadowed by Clint Eastwood’s bizarre unrehearsed speech.

“Trump is at 32 [percent] favorable,” former Romney senior strategist and outspoken Trump critic Stuart Stevens told TIME. “Until he revamps his image, everything will work against him. Most don’t like him and all negatives will stick.” 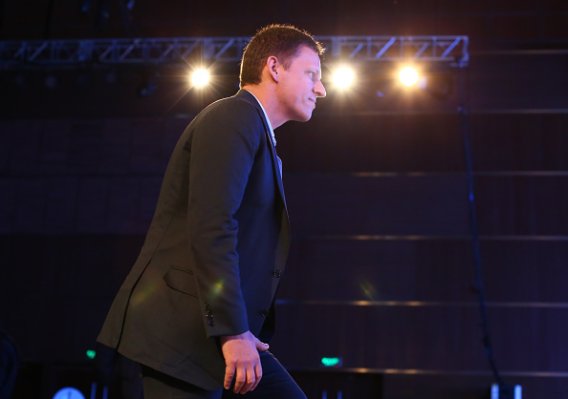