Dozens of police are stationed at Airline Highway at Goodwood Boulevard, where officers are stopping and searching every car that comes down the highway. Officers huddled under a tent on top of an office building off Airline and could be seen keeping watch over the traffic stop.

Most of the surrounding roads are blocked off and many businesses have closed for the day, in the wake of the shooting deaths of three police officers. The shooting, which also injured three other officers, comes as the city is weary with tensions between police and the community after the death of Alton Sterling, who was killed by Baton Rouge police on July 5 — and the protests that followed.

Maya Robertson, of New Orleans, stopped at the Shell Gas Station on Airline Highway to watch police search passing cars. The station served as a sort of impromptu gathering space for people wanting to see the scene of the shootings.

“This is ridiculous,” Robertson said. “I feel like everybody should just be able to get along and be peaceful without this happening.”

Robertson and her family were in Baton Rouge for the weekend visiting family when they heard about the deadly shootings. While the shooter’s motives are unclear, Robertson said she’s felt the racial tension in Louisiana for a while now, and added that she believed the shooting might have stemmed from what some see as an abuse of power.

Many officers who fatally shoot citizens are never punished, Robertson said, but if “cops were charged with crimes the same as other people in the community there wouldn’t be violence.” Robertson said violence only leads to more violence, such as the Sunday morning shooting that left three officers dead.

Michelle Patterson, who was also on her way back to New Orleans, agreed.

“If a pedestrian kills someone, they go to jail. Police should be held to the same standards,” Patterson said.

Eveline Riley, of Baton Rouge, said the shootings rattled her trust in the community. Police officers who responded to the scene were “just trying to do their jobs, just like everybody else.”

Riley said the recent protests in Baton Rogue have only led to more trouble, and she’s fearful this crime will lead to more police shootings around the nation.

Unless community leaders address concerns raised by the Black Lives Matter protesters throughout the city, the problem will only get worse, according to Redell Norman. Norman was camped out in front of the closed Shell station Sunday afternoon handing out free water and hot dogs to anyone who walked past — even police — and offering some shade from the humidity.

Norman has spent nearly two weeks camped out in that same spot protesting Sterling’s death. He said the officers’ deaths weren’t going to deter him.

“This is a symptom of a bigger problem,” Norman said. “Across the board, black people just want equality, but leadership isn’t listening to what we need.”

Norman said his fellow Black Lives Matter protesters always advocate nonviolence, but feel threatened when approached by police with military-grade machine guns and riot gear during the Alton Sterling protests. Still, he said he understands that the officers have a job to do.

Sunday’s deadly shootings are just a reflection of that worry, plus what he called the city leadership’s “unwillingness” to meet the protesters halfway.

Regardless of the city’s response, Norman said the nationwide shootings won’t stop until the racial tensions are addressed head-on. Until then, good people on both sides of the badge are in danger. 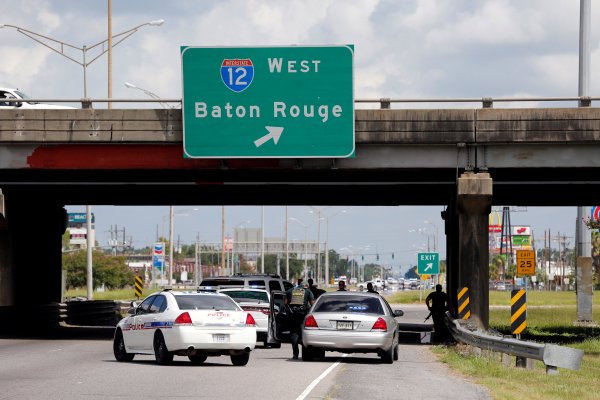 Cops Killed in Baton Rouge
Next Up: Editor's Pick