Few Mega Donors Are Ponying Up for the Conventions

Scenes from the floor of the 2016 Republican National Convention on Monday, July 18, 2016, in Cleveland.
Landon Nordeman for TIME
By Haley Sweetland Edwards / Cleveland and Chris Wilson

With the Republican National Convention kicking off Monday, and the Democrats following the week after, one thing is clear: The American public has almost no idea which wealthy donors, corporations, super PACs or lobbyists have ponied up the cash to underwrite these $75 million soirees.

That secrecy is due to the fact that at least 90 percent of convention funding comes from the parties’ non-profit “host committees,” which don’t follow the same Federal Election Commission rules on contribution limits or mandatory disclosure that the parties’ official convention committees are bound to. This year, both host committees have announced they plan to raise somewhere in the neighborhood of $65 million.

What is public is where that other 5 to 10 percent of funding is coming from. Due to FEC rules, the party committees are legally required to disclose, on a quarterly basis, the names of individual donors and how much they’ve given. They’re also prohibited from accepting cash from corporations and lobbying firms.

While the parties’ official convention committees’ coffers are relatively small—the Republicans raised $7.4 million, while the Democrats raised just $4.6 million, as of June filings—they offer some insight into which donors have been the most dedicated in this contentious election year.

Due to a 2014 rule change, individual donors can now give political parties nearly ten times more than they could give in 2012. In 2015 and 2016, wealthy donors were capped at $1.6 million over the two-year campaign cycle; in 2012, they were cut off at just $185,000 each. Some of that money is specifically earmarked to underwrite the conventions.

As of the last FEC report in June, a few stalwart donors had nearly maxed out that amount.

Coming in at a close second and third on the Republican side are fellow financial kingpins Warren Stephens and Charles Schwab, who gave $1.36 million and $1.27 million, respectively. None of the top three donor appear to have given any money directly to Donald Trump’s campaign.

On the Democratic side, individuals have been less magnanimous—at least through official channels. Only four donors have given north of $500,000 dollars directly to the party, compared to 43 on the Republican side. Leading the pack is Newsweb Corporation chairman Fred Eychaner, who gave $1.34 million to the Democratic Party, followed by hedge fund billionaire Henry Laufer and his wife Marsha Laufer, who together gave $1 million.

In a distant third are the mathematician and hedge fund founder James Simons and his wife Marilyn Simons, who together gave $786,200 to the party. All three have given substantial donations to Priorities USA, the super PAC supporting Hillary Clinton.

Typically reliable Democratic donors, such as George Soros and Tom Steyer, appear further down the list, having given the party’s official coffers nowhere near the maximum allowable by law, despite the fact that both have given eight-digit sums to all Democratic causes this cycle. It’s possible that those big donors have underwritten the convention through the more shadowy Democratic Host Committee, and both Soros and Steyer have given millions to other Democratic groups. Steyer alone has given $24 million this cycle.

The total private contributions to the official convention committees won’t become public until October, after the next quarterly release of financial disclosures. But we can expect that the sums will remain relatively low—nowhere near the roughly $18 million that both Republicans and Democrats received in public funding to host their conventions in 2012. Because the exact amount of public funding provided was pegged to inflation, each party would likely have received close to $20 million in 2016.

Since 1974, Congress has allocated money to help political parties put on their conventions. It’s a policy that dates to a Watergate-era effort to deflect the influence of private interests gaining undue access through their financial support of the quadrennial pageants. In 2014, Congress ended the program entirely. The federal government no longer provides any support to either party, except for security.

When lawmakers dismantled the forty-year-old public funding system in 2014, Congress quietly struck a deal with party elites: Congress would eliminate public funding for conventions but give the parties a chance to raise that money through private channels by dramatically increasing the amount of money that individuals could contribute to the national parties in a given election cycle.

So far, however, it does not appear that individual donors on either side are willing to make up the difference. On the eve of the 2016 national conventions, both the Republicans and Democrats are even more dependent on contributions from private special interests and corporate donors whose influence the public funding was originally designed to curb. 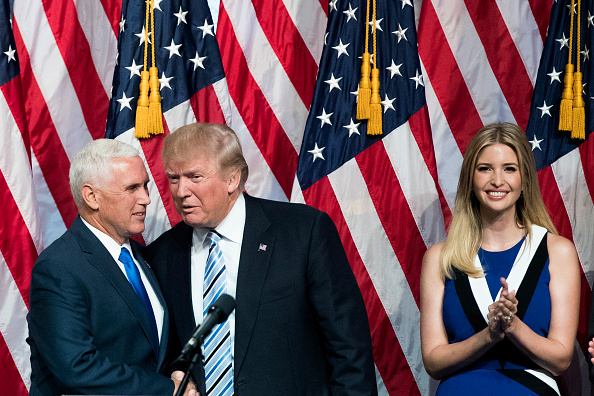 Donald Trump Aims to Soften Image at Convention
Next Up: Editor's Pick