Behind The Scenes Drama as Donald Trump Picks Mike Pence

All the way to the end, each of the finalists for the role of Donald Trump’s running mate believed that history beckoned.

Chris Christie’s allies were so sure the New Jersey governor was the pick that they encouraged his former New Hampshire state director to quit a lucrative consulting job to join the Trump campaign.

Newt Gingrich thought things were drifting his way too, thanks to a lobbying push led by powerful conservative stalwarts, including billionaire casino magnate Sheldon Adelson, who suggested he would lavish more cash on Trump’s campaign if the former House Speaker was on the ticket.

Meanwhile, Indiana Gov. Mike Pence was left in suspense in his New York hotel room Thursday night, days after allies became convinced that Trump had zeroed in on the Hoosier, and hours after the choice began leaking widely.

Trump’s vice-presidential sweepstakes, which finally wrapped up with a Friday announcement via Twitter that Pence was the pick, was classic Trump in certain ways. The showman milked the moment to maximize publicity, squeezing every last drop of suspense out of a selection process that allies believed was all but over early in the week. It was also characteristically haphazard, marked by changes of direction, muddled communication and missed opportunities. His team didn’t prepare a new web page, buy search ads or update social-media accounts to reflect the partnership.

But in other ways, the choice seemed to show a maturing candidate. By picking Pence, a mild-mannered Midwestern governor who brings a long legislative record and deep ties across the conservative movement, Trump opted for a safe choice instead of a star and chose logic over loyalty. Trump’s instinct was to elevate a national figure who shared his gift for bombast and love for the spotlight.

In Pence, who was touted by top national Republicans and Trump’s own campaign team, he gets a little-known social conservative who endorsed Trump’s rival, Texas Sen. Ted Cruz, in the pivotal Indiana primary just two months ago. It is a measure of Trump’s growth as a candidate that he let outside guidance trump his gut.

Trump and Pence had no relationship prior to the vetting process, but their chemistry passed an early test at a joint campaign rally. Then Trump invited Pence and his wife to his New Jersey golf club over the July 4 holiday weekend. By Monday, with just a week until the Republican convention kicks off in Cleveland, Trump’s inner circle believed the candidate was zeroing in on Pence.

But a day later, Trump’s top political aides were growing nervous, according to sources in the campaign and the Republican National Committee. Gingrich had launched an aggressive push for the job. The former House Speaker enlisted a retinue of friends, from evangelical leaders to high-dollar donors, to pitch his candidacy. One of the most persuasive messengers came from within his own family, according to two people familiar with the deliberations. Jared Kushner, the husband of Trump’s daughter Ivanka, has become a central figure in his father-in-law’s campaign. An orthodox Jew who helped Trump re-orient his foreign policy to emphasize ties with Israel, Kushner serves as one of the campaign’s unofficial liaison to Adelson, a foreign policy hawk who lavishes money on pro-Israel causes.

Back in May, during a meeting at the St. Regis Hotel in New York, Adelson told Trump he was willing to contribute substantially to the presumptive Republican nominee’s campaign. But no money has been spent yet, in part because a network of pro-Trump super PACs declined to stand aside. Adelson didn’t want to fork over cash that would duplicate those efforts, according to a source close to the casino magnate. During Trump’s deliberations over the vice-presidential pick, Adelson’s allies made clear that he would open the spigot if Gingrich—on whose 2012 presidential campaign Adelson dropped more than $20 million—was the pick, the Adelson ally said.

But the strings-attached offer turned Trump off, according to a Trump confidant. “Trump cannot be bought,” says a Trump ally, who was not authorized to speak on the record. “And he didn’t like the insinuation that [Adelson] has more money than he does.”

Trump was also ambivalent about Gingrich. He appreciated the verbose pol’s taste for rhetorical combat, especially his praise of Trump’s candidacy. But he and his political allies were worried about sharing the spotlight with another outsize personality. Gingrich was keenly aware of the potential downside. “Do you really want a two-pirate ticket?” the former House Speaker mused on Wednesday night.

Gingrich’s glibness wore thin. “Newt is the smartest guy in the world. Just ask him,” says the Trump ally. “He has a tendency to talk down to people above him. That hurt him.” For three days starting Monday, Trump held a series of phone calls with evangelical leaders to solicit input on whether Gingrich or Pence would be a better pick.

As Trump weighed his options, fate conspired to keep him in Indiana when a mechanical problem grounded his jet after the Tuesday night rally with Pence. The pair shared dinner that night, then breakfast the following morning. Trump’s eldest children—Donald Jr., Eric and Ivanka, with Kushner—flew to the Hoosier State that morning for a meeting with Pence at the governor’s mansion. Trump’s adult children are among his closest advisers, and their sign-off was a requisite. “It’s a family decision,” a senior Trump adviser explained.

By Wednesday night, the choice seemed clinched. At 11:30 p.m., Trump phoned Jerry Falwell, Jr., the President of Liberty University in Virginia and a close evangelical ally, to say that he had picked Pence. “Nobody knows but you,” Trump said, according to Falwell.

On Thursday morning at 8 a.m., Pence convened a meeting of political allies in Indianapolis to discuss political logistics should Trump tap him for the ticket. Pence, who was in the midst of a hard-fought re-election campaign, was facing a noon deadline on Friday to withdraw from the race. The Indiana governor had still not been informed of Trump’s decision, but he wanted to prepare his aides to get his name off the ballot in time if necessary.

And then he waited, like everyone else. Top national Republicans were being informed by around noon that Pence was the pick. The Indiana governor hopped a plane to New York for the ticket’s planned unveiling Friday morning. But neither Gingrich nor Christie had been informed. And Trump, who was out raising money on the West Coast, was irked as the trickle of leaks became a flood, according to two people familiar with the discussions.

A planned public roll-out Friday morning in Manhattan was scrapped Thursday evening, in deference to the terrorist attack on the French Riviera. On Thursday night, Trump told Fox News that he still hadn’t made his “final, final” decision.” The state of limbo led some Republicans to suspect that Trump’s confidence in his choice was wavering. One person close to Trump said the candidate was still working the phones late Thursday night, questioning the pick—not least because of the leaks emanating from Pence-world, which he felt were backing him into a corner. The Trump campaign denied these reports.

Gingrich and Christie launched last-minute appeals of their own on Thursday, with Christie calling Trump late Thursday to make the case for himself, according to someone familiar with the call, while Gingrich offered incendiary interviews on television he hoped would impress Trump.

Finally, on Friday morning, Trump announced his decision in a tweet—just over an hour before Pence’s deadline to withdraw from the Indiana governor’s race.

It was classic Trump, presiding over a messy, gripping reality show that left even the candidates in the dark until the last moment. While the process was uneven, the selection opens the door to a much-needed rapprochement between the warring factions of the GOP.

The only question left was whether Trump was quite as happy with the new partnership. When the ticket finally debuted together Saturday morning in Midtown Manhattan, he made a game attempt to move past the chaotic process. “Mike Pence,” he assured the crowd, “was my first choice.” 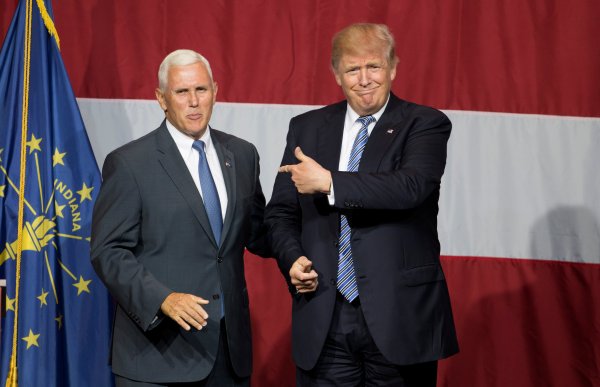