Newly installed signs warn of alligators and snakes on a closed section of beach following the death of a 2-year-old boy who was killed by an alligator near a Walt Disney World hotel on June 18, 2016 in Orlando, Florida.
Spencer Platt—Getty Images
By Katie Reilly

A Disney worker was fired and then rehired after she tweeted a photo of a sign asking employees not to tell guests they had seen alligators on the property.

“I was very offended by it and I was pretty vocal about it,” said Shannon Sullivan, who is working in Magic Kingdom restaurants through the Disney College Program, according to the Orlando Sentinel.

The poster told employees that the “correct and appropriate response” to questions about whether there are alligators in the water is: “Not that we know of, but if we see one, we will call Pest Management to have it removed.”

The incident came after the death of 2-year-old Lane Graves, who was snatched by an alligator last month while playing in shallow water in a man-made lake at a Disney resort.

“Please do not say that we have seen them before,” read the sign shared by Sullivan. “We do not want our guests to be afraid while walking around Frontierland.”

Disney has since removed the sign, which had not been authorized by the company, the Sentinel reported. Sullivan was fired around the same time, but on Friday, Magic Kingdom Vice President Dan Cockerell offered her the job back until her internship is scheduled to end later this month.

Graves’ death raised questions about whether Disney had offered guests sufficient warning about the presence of alligators. The company has since posted signs explicitly warning guests about alligators and snakes.

“I think you need to be telling people to be cautious, letting them know this could happen,” Sullivan said, according to the Sentinel. 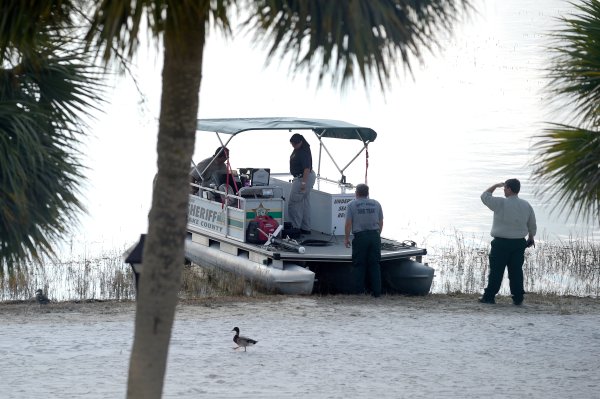 Officials: Alligator That Attacked Toddler Has Been Killed
Next Up: Editor's Pick