Was the Nice Attacker Really a Jihadist?

Two days after the devastating attack in Nice, which killed 84 people and injured hundreds, a muddied picture has emerged of the man who mounted the assault — with still no firm idea yet of whether he was a terrorist at all.

On Saturday, Islamic State claimed responsibility for the Bastille Day attack, trumpeting the truck driver Mohamed Lahouaiej Bouhlel as an ISIS “soldier” who barreled his heavy-duty vehicle through a crowd packing the seafront Promenade des Anglais during the traditional fireworks display on Thursday night. ISIS claimed in a tweet he had struck in retaliation for air war against the extremist group in Syria and Iraq, in which France is heavily involved.

This image obtained by AFP from a French police source on July 15, 2016, shows a reproduction of the picture on the residence permit of Mohamed Lahouaiej Bouhlel
AFP/Getty Images

But Bouhlel’s acquaintances reject that version, and describe the man they knew as troubled and violent, with no attachment at all to his Islamic faith.

In interviews on Friday and Saturday, old neighbors and longtime acquaintances of Bouhlel — who was killed by police on Thursday night — paint a picture of a volatile loose cannon with a history of violence, who ignored basic Muslim rules and never attended a mosque.

“He was not a Muslim,” said Walid Hamou, who also said he was a close friend of Bouhlel’s wife since her childhood, and had seen a lot of Bouhlel since his marriage a decade ago. “He drank, he ate pork, he danced, he dated lots of women,” Hamou said, sitting in the stairwell of his apartment building in the northern part of Nice on Saturday morning. “He didn’t do Ramadan. He did not pray.”

Hamou also said domestic abuse was a regular feature in Bouhlel’s household — something he believes helps to prove the driver’s lack of religious faith. “He hit his children. He hit his wife,” he said. Bouhlel, a Tunisian immigrant to France, married his French-born wife in Nice, but was in the process of divorcing her when he mounted his murderous assault on Bastille Day.

A similar picture emerged in interviews with TIME on Friday, from neighbors of Bouhlel’s in-laws in a public-housing complex in northern Nice. “He drank, and he smoked on Ramadan,” said one neighbor, who did not want to be named. By contrast, he described Bouhlel’s in-laws as “very good,” sober and personable, he said, with a thumbs-up sign.

Bouhlel’s father Mohamed Mondher Lahouaiej Bouhlel told the French news agency Agence France-Presse on Friday that between 2002 and 2004, his son had suffered a nervous breakdown, in which “he became angry, he shouted, he broke everything he found in front of him.” He said the two fell out of touch after Bouhlel moved to France in 2005.

The question of whether Bouhlel was a violent troublemaker or an Islamic jihadist is key to French officials. Investigators are trying to determine what motivated Bouhlel, how he carried out the attack, and how police and intelligence services missed the planning for it. It is the third mass-casualty attack in 18 months in France, after the Charlie Hebdo attack in January 2015 and the Paris attacks last November, which prompted President François Hollande to impose a state of emergency. While the two Paris attacks were clearly linked to terrorist groups, until the ISIS claim on Twitter on Saturday, there was nothing tying Bouhlel to any broader network or beliefs.

On Friday the Paris prosecutor François Molins, who is overseeing the investigation, told reporters in Nice that Bouhlel had had previous run-ins with police for assault and theft, and earlier this year was given a suspended sentence for an altercation with a driver. Still, Molins said, “there were no red flags for radicalization,” as such he was “completely unknown to both France’s domestic and foreign intelligence officials,” and his name was not in the country’s “S file” of suspected terrorists.

In the first hours after the attack, top French officials seemed divided over whether the Nice killings were a terrorist attack or not. Prime Minister Manuel Valls — a vociferous proponent of tough action against Islamists — quickly declared it terrorism. But Interior Minister Bernard Cazeneuve said Bouhlel had no known link with terrorist groups.

On Saturday, Cazeneuve seemed to shift his view, telling reporters after a Cabinet meeting that Bouhlel apparently adopted jihadist views at least at the end of his life. “It seems he was radicalized very quickly,” Cazeneuve said, adding that that impression was drawn from those taken into custody in Nice since the attack. The police detained five people for questioning on Friday, including the attacker’s estranged wife.

Police recovered Bouhlel’s cell phone after killing him, and on Friday seized computers — all in the search for clues to Bouhlel’s motivations.

Hamou speculated that the upheaval in Bouhlel’s personal life, including financial problems, might have sparked Thursday’s attack. “His wife did not want to see him since he was beating her. His children no longer wanted to see him,” he said. He speculated that ultimately, Bouhlel simply suffered “a momentary spike of madness.” If so, it was a spike that left dozens dead and maimed, and a city deeply shaken. 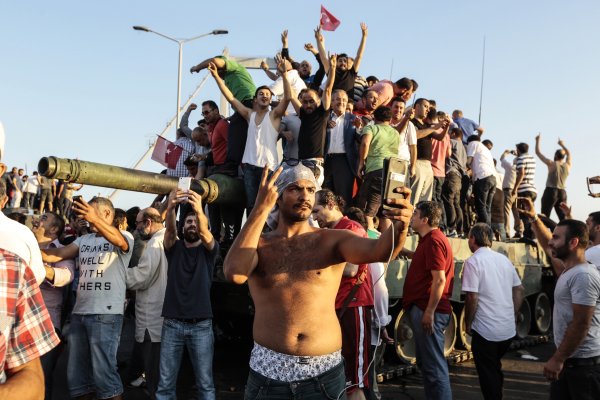