An attempted military coup in Turkey appeared to have failed Saturday as President Recep Tayyip Erdogan returned to the city of Istanbul, and his acting military commander and Prime Minister said the uprising had been successfully quashed.

Erdogan called the attempted coup an “act of treason” in the early hours of Saturday morning, saying perpetrators will pay a “heavy price.” As he addressed supporters outside Istanbul’s Ataturk Airport, the President said: “They have pointed the people’s guns against the people. The president, whom 52 percent of the people brought to power, is in charge. This government brought to power by the people is in charge. They won’t succeed as long as we stand against them by risking everything.”

Yildirim also indirectly laid the blame for the coup with Fethullah Gulen, the exiled cleric and opponent of Erdogan who has strenuously denied having played any part in the attempted putsch. The Prime Minister said any country that stands by Gulen, who lives in Pennsylvania, will be considered at war with Turkey, Reuters reports. According to Yildirim, some 1,400 were wounded in the coup attempt and more than 2,800 members of the armed forces have been detained. Around 200 are estimated to have been killed.

Umit Dundar— who was made acting Chief of Staff after coup-makers reportedly took his predecessor hostage— said the air force command, the gendarmerie command and armored forces units were behind the coup, Hurriyet reports. Mehmet Muezzinoglu, deputy head of Erdogan’s ruling Justice and Development Party (AKP), called for the death penalty to be brought back for those responsible.

Read more: This Is What Istanbul Was Like As Turkey’s Attempted Coup Played Out

The violence seemed to be focused on Turkey’s major cities, Ankara and Istanbul. A Turkish F-16 jet controlled by the attempted coup-makers, bombed near the presidential palace in the capital city of Ankara. According to Hurriyet, it killed 5 people. A military helicopter carrying ‘coup plotters’ was reportedly shot down over Ankara by government forces, according to broadcaster NTV.

In Istanbul, as the attempted coup was underway on Friday night, tanks blocked the city’s bridges and airport. By Saturday morning, footage from CNN-Turk showed dozens of soldiers leaving their blockade and surrendering to government forces on Istanbul’s Bosphorus Bridge.

The coup attempted appeared to crumble as fast as it began. On Saturday, Turkey’s Anadolu Agency reported that soldiers part of the attempted coup in the Chief of General Staff Headquarters have requested negotiations for their surrender.

Close to noon local time, the Greece defense ministry confirmed that a Blackhawk military helicopter had landed at Alexandroupolis airport in northeastern Greece. The passengers, which include one civilian and seven Turkish military personnel, have asked for asylum. 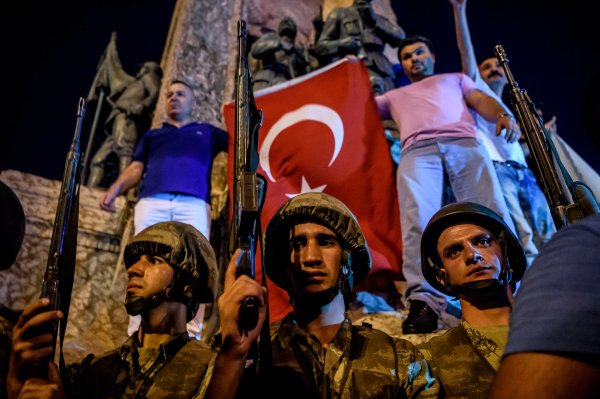 What Istanbul Was Like As Turkey's Attempted Coup Played Out
Next Up: Editor's Pick