The jets came in low, screeching over Istanbul’s Taksim Square. Then there was the sound of a blast. The protesters scattered and the sound of gunfire rattled through the air.

Turkish military officers announced on Friday night that they had taken control of the country. President Recep Tayyip Erdogan and his government refused to stand down, denouncing an attempted coup—though Erdogan was nowhere to be seen initially, and rumors flew that he was fleeing the country for asylum abroad. What followed was a volatile power struggle and a surreal night of violence in the streets of some of Turkey’s major cities, with an estimated 200 people killed in clashes between Turkish military forces and their fellow citizens.

Only on Saturday did order begin to reassert itself, as Erdogan returned to Istanbul and his acting military commander and prime minister each said the coup had been suppressed. Deputy Chief of Staff Umit Dundar said in televised remarks the coup had been “rejected by the chain of command.” Prime Minister Binali Yildirim, appearing on television said “all leaders of the uprising are now under arrest,” calling it a “black stain for Turkish democracy.”

The extraordinary events began around 10 pm local time, when reports emerged that military forces had blocked two bridges spanning the Bosphorus Strait in Istanbul, the body of water that runs through the city and divides Asia and Europe. Around 10:30 a faction military officers announced they had taken power. Yet soon after, President Erdogan appeared on television—albeit via a video chat on a TV anchor’s phone—and urged the public to take to the streets to resist the coup attempt. “I am also on my way,” he said.

He boarded a flight for Istanbul. The contradictory statements from the president and the plotters opened a moment of genuine foreboding and uncertainty. For those in Istanbul—including myself—it was impossible to tell who was actually in control of Turkey, a NATO member and a military power. And it was impossible to know what would come next.

In Istanbul, Erdogan’s supporters heeded their president’s call, and began to filter toward Taksim Square, the main gathering place in the city. Hundreds collected in the plaza surrounding a large statue, while wary riot police stood by off to one side, a riot dispersal truck on standby.

The demonstrators cried in support of the government, interspersed with the call and response of “Takbir—Allahu Akbar,” or God is the Greatest, God is Great, the widely used chant a reflection of the Islamist political sympathies among some of the government’s base of support, sympathies that haven’t always been shared by the more avowedly secular military.

After midnight, standing on the statue illuminated by streetlights, some protesters unfurled a banner reading “The demon is in Pennsylvania.” The slogan referred to Fethullah Gülen, an influential Turkish religious figure who is based in the U.S. and who was accused by Erdogan and his allies of plotting the coup attempt. (In a statement, Gülen later denied being part of the coup.) Helicopters thumped overhead. Occasional gunfire nearby sounds disrupted the rally but the demonstrators remained.

Soldiers soon appeared, ringing the statue and opening a standoff with the protesters, who continued to chant in their faces. The soldiers formed a partial ring around the statue, facing out toward the demonstrators. Some protesters shouted in the troops’ faces, while others held back, wary of the possibility of violence.

In spite of the tension, the crowds began to drift away as government officials continued to announce their defiance of the power grab. Turkey’s three main opposition parties—leftist, centrist, and far right, all opposed to Erdogan—made clear their opposition to the coup. Some of Erdogan’s most bitter opponents backed him when pushed came to shove, and it appeared the integrity of democratic transition was threatened, as it has been multiple times by the military since modern Turkey’s founding nearly a century ago.

Then, for no clear reason, the soldiers began marching away, sending up a cheer from the now diminished crowd. Groups of young men began to jostle with police on the edge of the square.

Without warning, the sounds of explosions erupted. The coup plotters had spoken, responding to Erdogan’s defiance with deafening booms.

Read More: What to Know About the Group President Recep Tayyip Erdogan Is Blaming for Turkey’s Attempted Coup

The first one was so close it was accompanied by a palpable shift in the air pressure, a military jet screaming in from the direction of nearby Gezi Park. Sprinting for shelter, demonstrators knocked over a police barricade which fell clanging to the ground. That was followed by a second and a third boom as more jets screeched overhead, the sound so powerful it shattered the windows of buildings near the square. Shards of glass fell onto Istiklal Street, a huge canyon of a boulevard that runs southwest of Taksim Square. More gunfire rang from the other end of the street. Demonstrators and passersby ran down alleyways and around corners. Others fell to the ground or ducked for cover.

Separately, in the capital of Ankara, 280 miles (450 km) away, even more violent mayhem was unfolding. At least one explosion shook the parliament building, the chaos captured on video. At least 42 people were killed throughout the capital, the local authorities said, in various attacks, although few details were released.

Despite the violence, it seemed that the government was successfully battling back the coup, which failed to spread throughout the entire military. Soon after his flight landed at Istanbul’s main airport, Erdogan emerged to once again to denounce the coup, with an ominous warning for those who were left. “This uprising is a gift from god because thank to this we will clear the military of traitors,” he said in a televised address.

A group of men stand atop a tank the morning after a military coup attempt against the government of Recep Tayyip Erdogan turned violent, killing dozens and leaving hundreds of others detained, on the Bosphorus Bridge in Istanbul, Turkey, on July 16, 2016.
Bulent Kilic—AFP/Getty Images

Yet while the government insisted it had control of the country, the battle for public perception continued. Soldiers filed into the studio of CNN Turk as the channel broadcast live on air, briefly taking control of the channel, even as a camera continued to show an empty studio. Coup plotters seemed to have control over a portion of the air force, as F-16s screamed through the sky.

But Erdogan returned to Istanbul on Saturday, and the government quickly declared the attempted coup had failed. Turkey’s acting military chief Umit Dundar told the nation on television that 100 coup plotters had been killed, on top of 90 police and civilians already believed to be dead.

“The coup attempt was rejected by the chain of command immediately. The people have taken to the streets and voiced their support for democracy,” he said, the New York Times reports. “The nation will never forget this betrayal.”

As the sun rose over a dazed Istanbul, the sounds of gunfire continued. A new day has begun—and the uncertainty facing Turkey is only deepening.

— with reporting by Vildan Ay / Istanbul 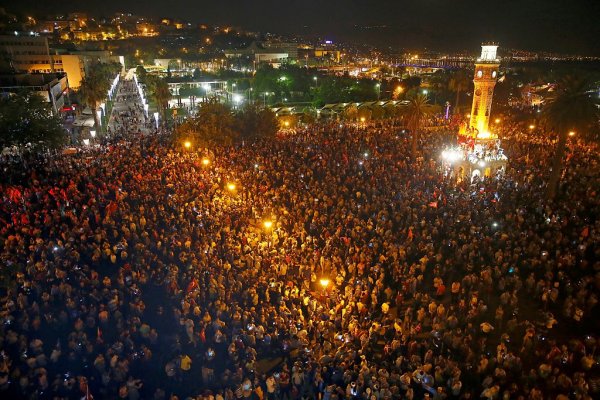