Sunday, July 17 is World Emoji Day. So of course it would make sense to celebrate the universal language of our generation.

They first appeared in 2011, but before emoji, if you’ll recall, we tended to use simple keyboard commands to transmit emotion via text: the colon and the closed parenthesis, for instance, was the standard smile. With today’s emoji, we have 23 different smiley faces that all feature an upturned mouth — and that’s not including the various animals, aliens, ghosts, and human-like depictions of positive emotion that are also found on the special keyboard.

Today, we can count 1,851 official symbols recognized (and distributed universally) by the Unicode Consortium, a technical body that reviews and approves the pictographic language.

Of course, that’s not to mention the countless emoji apps that have been developed as separate keyboards: from Bitmoji to KIMOJI, Justin Bieber’s Justmoji, and StephMoji, there are pretty much infinite ways to express oneself without words these days. A restaurant in London has even written an emoji-only menu, and an emoji movie is in the works.

To top it off, the Oxford Dictionary anointed an emoji as its 2015 Word of the Year (the “Face with Tears of Joy”). They calculated that this single icon made up 20 percent of U.S. and U.K. emoji use, followed by the kissy-face emoji, which accounted for 9 percent in the U.S., according to their research.

“Emoji have come to embody a core aspect of living in a digital world that is visually driven, emotionally expressive, and obsessively immediate,” the Oxford Dictionary said in a statement.

We’ve come a long way from the initial roll-out of emoji, too. The Japanese telecommunications planner Shigetaka Kurita is widely considered the inventor of the pictographs in 1999. The first set of simplistic emoji were also limited to traditional gender stereotypes and a single skin color (yellow), although now that’s all changing as each character becomes more customizable with more gender and skin tone diversity.

So happy #WorldEmojiDay. This universal language has simplified (and made it easier to express emotion in) our digital communications. 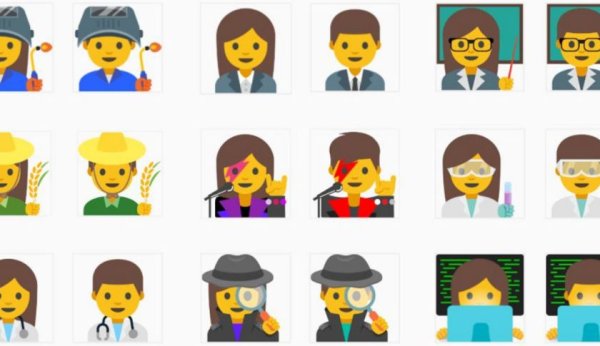 New Emojis Are Coming — And They're Bringing Gender Equality
Next Up: Editor's Pick