Meet the Other Judges Who Speak Out

How outspoken are judges allowed to be away from the bench? Supreme Court Justice Ruth Bader Ginsburg was widely criticized for her public remarks about Donald Trump, but there are other judges who have tried to walk the tightrope that Ginsburg fell off.

“Becoming a judge is a lot like being gelded,” says Judge William Bedsworth, who serves as an associate justice for the Fourth District of the California Court of Appeal. “Which is frustrating. By definition we’re interested in the political process, and we’re highly educated. We would love to speak out.”

Bedsworth does manage to speak out—by way of a syndicated humor column, “A Criminal Waste of Space,” which has run in a variety of publications for 35 years. “In most of my judicial writing, there’s no room for humor. I can’t say, The five-million-dollar judgment against you is reversed, but did you hear the one about the nun, the parrot, and the sailor?”

Among the best-known judge-cum-writers is Judge Richard Posner, who serves on the Seventh Circuit Court of Appeals in Chicago. Since his appointment to the bench in 1981, Posner has published more than 20 books, continued to teach, and has written frequently on law and economics for both scholarly and popular audiences.

But Posner, who through an assistant said he was not allowed to comment on what Ginsburg said, is far from the norm. It’s hard to find other federal judges who write frequently. And after Judge Richard Kopf, a senior judge on the U.S. District Court for the District of Nebraska, closed his blog in 2015, that made one fewer.

Two years after Kopf assumed senior status in 2011, he began that blog, Hercules and the Umpire, about the endeavors of a federal trial judge. He wrote, almost daily and generally without much fanfare, on his caseload and on topics that interested him. Sometimes he would wind up in the internet’s crosshairs, like he did after a post in which he called himself a “dirty old man” and commented on the dress of female attorneys, or another in which he told the Supreme Court to “STFU” after the Hobby Lobby decision in 2014.

But nothing caused him quite so many problems as a post in 2015 in which Kopf wrote that Texas Senator Ted Cruz was “demonstrably unfit to become president.” (Cruz had proposed retention elections for Supreme Court justices.) “If you go back and read the comments on my blog post—and you shouldn’t, because you’ll want to put a gun in your mouth—the Cruz folks saw this as a reflection of the liberality and untethered actions of judicial activism,” Kopf says. In the view of the commenters, the post “called into question not only my legitimacy, which has always been suspect, but other judges’ as well.” (A law professor, Orin Kerr, had written on the Washington Post website that Kopf’s post had violated the federal rules; at first Kopf disagreed but later allowed that Kerr was correct. Shortly thereafter, Kopf closed the blog, when some colleagues suggested it had become an embarrassment to the court.)

Indeed the courts’ legitimacy is the major matter protected by the restrictions on judges’ speech. “Putting on a robe, not engaging in politics, not engaging in fundraising—there are a whole range of things that the judge does that are designed to impress upon the judge him- or herself- that in their judicial role they are supposed to be impartial,” says Michael McConnell, a former judge on the Tenth Circuit Court of Appeals and now the director of the Constitutional Law Center at Stanford. “When I left the bench and people asked why, I told them—only semi-jokingly—that I wanted my First Amendment rights back.”

In exchange for its judges’ impartiality, the federal judiciary has been granted since the early 1800s an implicit license to operate without interference from the other branches of government. (Supreme Court Justice Samuel P. Chase had been impeached by the House of Representatives in 1805 for attacking the actions of Thomas Jefferson in a public forum; the Senate acquitted him.)

Kopf says he agrees with the prohibitions on political speech from lower-court federal judges like himself. But he figures there’s less harm in having Supreme Court judges—who deal more than he does with policy and principles—share their political views.

Says Bedsworth, the judge with the humor column, “I’m sure there are colleagues of mine who read me and say, ‘Aw, shit, not this guy again.’” But he wants the public to know that judges are members of their communities trying their best to serve, “and not a cadre of elitist oligarchic Pharisees.” A few jokes, he says, go a long way. 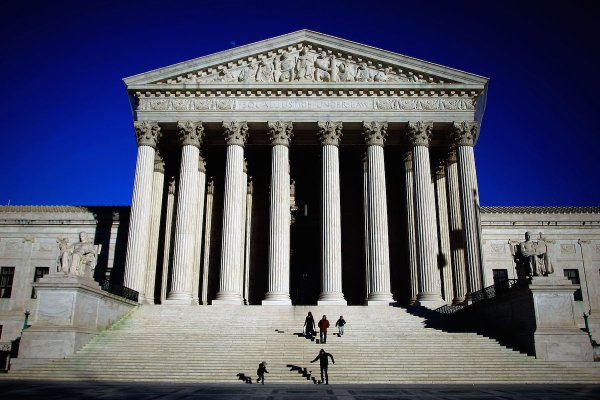 The Long History of Supreme Court Justices Getting Political
Next Up: Editor's Pick