French Politicians Say Nice Attack Might Have Been Avoided

Forensic police investigate the truck at the scene of the terror attack on the Promenade des Anglais in Nice, France, on July 15, 2016. Authorities said a French-Tunisian attacker killed 84 people as he drove a truck through crowds, gathered to watch a firework display during Bastille Day celebrations. The attacker then opened fire on people in the crowd before being shot dead by police. Patrick Aventurier—Getty Images
Patrick Aventurier—Getty Images
By Dan Stewart

Alain Juppé, a former Prime Minister who is now mayor of Bordeaux, was among the first to voice criticism of President François Hollande’s government in the wake of the attack.

“If all measures had been taken, the Nice attack would not have taken place,” he said in an interview with local radio, saying that “flaws and shortcomings” still existed in national security strategy. “It is imperative that government intervene in that area to better coordinate our intelligence services.”

Juppé, an unpopular figure during his time in office, has seen a popular resurgence in recent months and is the center-right’s leading candidate for next year’s presidential elections. He is considered the favorite to unseat Hollande.

Former Nice mayor Christian Estrosi, who hails from the same Les Republicains party as Juppé, also raised the question of whether more could have been done.

France has been under a state of emergency ever since November’s attacks in Paris, and Hollande’s government has deployed thousands of soldiers to protect sensitive sites across the country.

On Thursday, Hollande suggested the state of emergency might be lifted after July 26. Today, he said it would be extended for another three months. 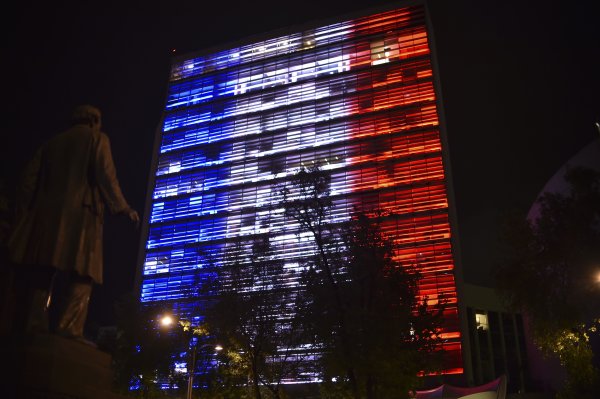 Buildings Across the Globe Illuminate in Solidarity With France
Next Up: Editor's Pick