South Korea’s county of Seongju is famed for its melons. The plump, yellow Chamoi variety account for 70% of commercial output and 60% of labor. The local government’s website also trumpets the area’s apples, pears, tomatoes and “charcoal dropwort,” which is “grown free of pollution and without using any fertilizers.” Nowhere on the website is there a mention of missiles, however, with which Seongju has suddenly become synonymous.

The changing identity comes after the U.S. and South Korean governments decided to stage the U.S. Terminal High Altitude Area Defense (THAAD) anti-missile battery in the vicinity. Many local people are incensed by transition from forest and farmland to first line of defense, especially after North Korea vowed a “physical response.” On Wednesday, around 5,000 people — 10% of the local population — staged a rally in Seongju against the deployment. Some claim radiation from THAAD threatens to spoil their crops. Others even penned gruesome letters. “No to the deployment of THAAD in Seongju,” Governor Kim Hang-kon wrote with his own blood before the crowd.

Washington and Seoul say THAAD is necessary to ward off any potential attack from North Korea. Pyongyang is inching toward its stated goal of building a miniaturized atomic warhead capable of riding a Pacific-spanning rocket. The U.S, which has about 28,000 troops in South Korea and is footing the bill for THAAD, says the system will protect it and its allies from such attacks (though likely not the city of Seoul, which is too close to the North Korean border for any salvo to be intercepted.)

However, around half of South Korea’s 50 million people are opposed to THAAD. Those in favor say it is necessary protection against North Korean belligerence; those opposed say that it is ineffective for national defense, decry a lack of consultation, and insist it jeopardizes Seoul’s diplomatic position. “People who oppose THAAD also say it undermines South Korea’s sanctions structure,” says Christopher Green, international affairs manager at news website DailyNK.

This is because China is also vehemently against THAAD, seeing the technology not as a defense against North Korean aggression, but an attempt to implant American military might in the heart of East Asia. Chinese President Xi Jinping and Russian President Vladimir Putin have released a joint statement saying THAAD “severely infringe[s] upon the strategic security interests of countries in the region,” and decrying Washington “threatening the use of force in international affairs.”

Beijing sees THAAD is part of an American strategy of containment, especially as the two powers continue to spar over China’s militarization of rocks and reefs in the disputed South China Sea. If China is paranoid, you can’t wholly blame it. THAAD’s location was announced a day after the Permanent Court of Arbitration in The Hague ruled against China’s claims in the vital trade corridor, through which some $5 trillion of cargo passes annually.

“The Chinese media and [Chinese Communist Party] itself decouples the issue of THAAD from North Korean missile development,” says Adam Cathcart, an East Asia expert at the University of Leeds in the U.K. “Their view is that THAAD is much more connected to South China Sea issues.”

Chinese opposition to THAAD is good news for the regime of North Korean despot Kim Jong Un. In March, China signed up to unprecedented sanctions in the U.N. Security Council Resolution 2270 following Pyongyang’s fourth nuclear and latest missile tests. As China accounts for 90% of North Korean trade, getting Beijing on board was key. Chinese imports of coal — worth around $1 billion to the regime last year — have dropped precipitously. Inspections to ensure any imports cannot have a military application have also been ramped up. “We used to have no trouble exporting steel,” one trader in the Chinese city of Dandong by the North Korea border tells TIME. “But now we have to provide certificates and documents to prove the composition of minerals in the steel meets export regulations.”

However, THAAD may cause Beijing to pull out of the sanctions, or at least take its foot off the gas in terms of enforcement. “THAAD illustrates the inherent cracks in that alliance and tensions between the players,” says Cathcart. “The North Korean state recognizes that.”

Since the armistice in 1953 that effectively ended the Korean War, the North of the Korean peninsular has been ruled by Kim Il Sung and his progeny. This clan has maintained its position internally through Orwellian state control, and externally through cunning brinkmanship — switching between bellicose rhetoric, displays of strength and reconciliation through dialogue — to confuse, weaken and cause splits in allies and enemies alike.

“They look at the international system as this Hobbesian world of chaos and anarchy where it’s dog-eat-dog and every state is on its own,” says Daniel Pinkston, an East Asia expert at Troy University in Seoul. “Really they are the ultimate realists — Machiavellian realists.”

Realists who, according to a 2014 U.N. report, inflict on North Korea’s 25 million people “extermination, murder, enslavement, torture, imprisonment, rape, forced abortions and other sexual violence, persecution on political, religious, racial and gender grounds, the forcible transfer of populations, the enforced disappearance of persons and the inhumane act of knowingly causing prolonged starvation.”

Division in international action is partly to blame for these continuing atrocities. Since the fall of the Soviet Union, these fissures have ultimately boiled down to geopolitical rivalry between the U.S. and China. Beijing is happy to see North Korea’s survival as it prevents the reunification into a peninsular ruled from Seoul that is a stanch U.S. ally. The nuclearization of North Korea complicates this picture — hence Beijing’s acquiescence to Resolution 2270 — but not yet to a degree where China would want to see regime change in Pyongyang.

Even if THAAD in Seongju doesn’t prompt China to jettison the sanctions, more conflict lies just around the corner. Japan is also considering whether to ramp up its own defenses, possibly involving THAAD, and this will undoubtedly rile Beijing. Plus the U.S. has launched sanctions against Kim Jong Un specifically for human-rights abuses. This does not please the Chinese Communist Party, which does not want any attention on its own human-rights record, nor indelible focus on the Kim family specifically that might sour an already fraught bilateral relationship. Adds Green: “[The North Korean regime] will be happy to see this conflict as it provides them with opportunities.”

Most Popular on TIME
1
Everything You Need to Know About Nurse Ratched Before Watching the New Netflix Show
2
Ruth Bader Ginsburg Wishes This Case Had Legalized Abortion Instead of 'Roe v. Wade'
3
4.5 Magnitude Earthquake Strikes Southern California 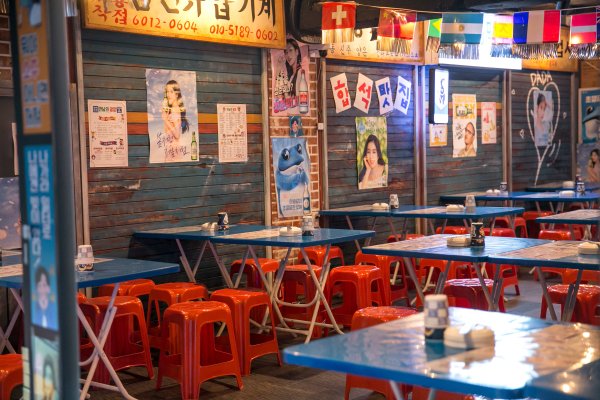