A last-ditch effort by anti-Trump delegates to unseat the presumptive nominee failed late Thursday by an overwhelming margin, assuring Trump’s position atop the Republican Party’s ticket.

After a marathon session of behind-the-scenes wrangling and technical votes, delegates to the Republican National Convention voted down changes to the party rules to unbind themselves at the convention by a margin seemingly large enough to avoid a floor showdown in Cleveland on Monday. Such a move was necessary to preserve even a hope of replacing Trump as the party’s nominee, and its failure marked the unification of pro-Donald Trump delegates and Republican National Committee loyalists.

In an unusual move for the threadbare campaign—and a sign of how seriously his team took the coup threat—Donald Trump aides flooded the convention hall in Cleveland where the delegates were meeting, identifiable by their matching lapel pins. Lawyers for Trump’s campaign, flown in from Washington, huddled with RNC attorneys to examine language up for consideration, while a team of whips worked the risers on which the committee was seated.

Trump aides and RNC Chairman Reince Priebus had predicted victory for weeks, as they criticized the so-called “Free the Delegates” movement as contributing to party disunity. On Tuesday, RNC General Counsel John Ryder, a key Priebus ally, rejected a central argument of the unbinding crowd—that a quirk of party rules meant they were never bound in the first place—making clear that such an interpretation was flawed and would not be honored.

That left a rules change as the only avenue remaining for the anti-Trump delegates, and not only did they lack a majority on the 112-member rules committee, they also lacked just the 28 members required to send a minority report to the full convention floor. (On the full convention floor they would also be greatly outnumbered, but it would create more opportunities for party drama in a televise setting.)

Just minutes after the committee gaveled into order Thursday morning, it recessed, ostensibly because of a printer jam, but in actuality due to negotiations between Priebus and his allies, and several of the anti-Trump delegates. But the negotiations centered less on whether to unbind the delegates, rather on a series of changes to the party rules to weaken the chairman and strengthen the party grassroots.

Backed by Texas Sen. Ted Cruz allies and led by former Virginia Attorney General Ken Cuccinelli, the proposed rules would have limited the influence of lobbyists on the committee, while toughening restrictions on who could vote in party primaries. (The free the delegates movement was counting on at least the tacit support of the pro-Cruz movement, and though committee-member Utah Sen. Mike Lee signaled support, it was not enough to sway the delegates.) At one point Cuccinelli and RNC Chairman Reince Priebus discussed requiring the first four contests—Iowa, New Hampshire, South Carolina, and Nevada—to limit participation to registered Republicans. The closed-primary measures were strenuously opposed by RNC members from those states, particularly New Hampshire, which prides itself on its historic primary’s tradition of allowing independents to participate.

By midday Thursday, talks between the two groups had broken down and the committee considered a range of amendments offered by Cuccinelli allies. The first, offered by longtime Virginia RNC national committeeman Morton Blackwell served as the test vote. His amendment, to return to the pre-2012 rules prohibiting the RNC from changing its rules between conventions, failed by a 23-86 margin. It set the tone for the rest of the day, as a series of amendments which would have made key RNC posts elected, rather than appointed, positions, failed by similar margins.

The committee did approve a measure from former Texas GOP Chairman Steve Munisteri to create a committee to study the 2020 nominating process, to report by May 31, 2018. The committee’s report would be advisory in nature, and would require the RNC to adopt any recommendations it makes.

Late Thursday, the committee finally directly addressed the issue of binding, holding a vigorous debate between those delegates making their last stand to oppose Trump and those who either supported him, or feared that unseating him would have worse long-term consequences for the party. Those in favor of a conscience clause, which would have allowed delegates to claim they could not vote for Trump on moral grounds, called for delegates to be able to speak their mind and advocated on behalf of the supporters of Trump’s primary rivals.

Those opposed raised a number of objections, from noting there was no one left running in the GOP race beside Trump, to arguing it would be undemocratic to countermand the will of millions of GOP primary and caucus voters. In the end the latter arguments were persuasive amid a concerted whipping effort by Trump’s operation. The vote was so resounding that no member requested a standing vote with a division of the assembly motion.

It is still possible for the anti-Trump forces to reach the 28 signatures required for a minority report on Monday—they will have one hour after the permanent committee on rules approves the rules packed just after 2 p.m. that day to submit those signatures to convention officers. But such a move appeared increasingly unlikely to come to pass. Nevertheless, the anti-Trump coalition promised to press on, while individual delegates and spectators are planning protest motions and outright protests when the convention convenes next week. 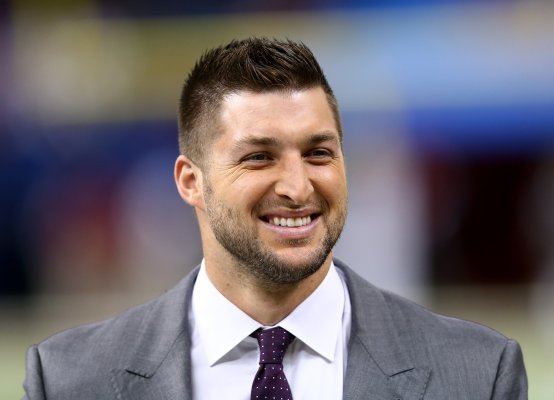 Tim Tebow Says He Won't Be Speaking at the Republican Convention
Next Up: Editor's Pick