What We Know About the Attack in Nice

At least 84 people were killed Thursday night when a truck careened through crowds of people celebrating Bastille Day in the southern French city of Nice. French President François Hollande has said the attack, which also left dozens of people injured, was likely an act of terrorism. He said later that there were 50 injured people “between life and death.” The driver was named as Mohamed Lahouaiej Bouhlel, 31, a resident of Nice, by French authorities. On Saturday, ISIS claimed the attack.

What happened
According to eyewitness accounts, bodies were sent flying into the air as the heavy-duty white transport vehicle hit them on the Promenade des Anglais at about 10:30 p.m. local time, where people had gathered to watch fireworks by the Nice seafront. Videos taken by bystanders show the truck zigzagging as the driver apparently sought to hit as many people as possible as he drove along more than a mile of crowded road. Images from the scene show bodies sprawled along stretches of road. Local paper Nice-Matin reports the drive lasted 45 seconds.

The driver reportedly also opened fire on the crowd, and was killed in a shootout with police. Photographs show the windshield of the truck riddled with bullet holes after it was brought to a halt.

The assailant
Details have begun to emerge in local media about Mohamed Lahouaiej Bouhlel, who was identified after documents were discovered in the truck. A French prosecutor confirmed the identity of Bouhlel Friday, identifying him as a 31-year-old Tunisian national who lived in France.

The prosecutor said Bouhlel was known to the police for assault and theft but was not on the radar of intelligence agencies. Bouhlel had a wife and family. France’s interior minister Bernard Cazeneuve says Bouhlel “seems to have become radicalized very quickly,” according to the Associated Press.

His wife was arrested early Friday and is being questioned by authorities. It is not yet known whether Bouhlel had any accomplices.

Terrorist link suspected
Officials were quick to say they suspected a terrorist attack had taken place. The Paris prosecutor’s office has opened an investigation into “murder, attempted murder in an organized group linked to a terrorist enterprise,” to be led by the country’s intelligence agency and judicial police, the Associated Press reports.

ISIS claimed the attack in a statement on its news media outlet saying the “executor of the deadly operation” was their “soldier” according to the SITE Intelligence Group. Observers monitoring terrorist groups said that both ISIS and al-Qaeda have asked their followers to use vehicles as weapons.

The January 2015 attack on the Paris offices of the magazine Charlie Hebdo was linked to al-Qaeda’s Yemen branch, and the multiple attacks in the same city in November were claimed by ISIS.

The victims
The death toll of the attack is still rising, but France’s interior ministry has reportedly said so far 84 deaths have been confirmed. A French prosecutor said Friday that 202 people were wounded in the attack: 25 are on life support, 52 are in critical condition.

Victims include nationals from Switzerland, Morocco, the U.S,, Russia and Armenia.

Among the injured are three Australian nationals, Australia’s Foreign Minister Julie Bishop has said. China’s official CCTV News said two Chinese nationals were also wounded in the attack. Britain’s Foreign Secretary Boris Johnson has only so far confirmed that one British national was injured in the attack.

A spokesperson for a children’s hospital in Nice told the Associated Press that about 50 children and adolescents were treated after the attack, including two who died during or after surgery. “Some are still life and death,” said Stephanie Simpson of the Lenval foundation hospital.

A man at the scene of the truck attack in Nice, France, on July 15, 2016. Authorities said a driver plowed into people celebrating Bastille Day late on Thursday, killing at least 84 people.
Patrick Aventurier—Getty Images

State of emergency extended
President Hollande addressed the nation in the early hours of Friday morning local time, condemning the attack, whose victims he said included children. He said the “terrorist nature” of the attack was “undeniable,” AFP reports. A state of emergency in France — which has been in place since November’s attacks on Paris, but was set to be lifted later this month, before this latest attack — has been extended for another three months. Hollande was expected to travel to Nice on Friday following a meeting of the country’s Security and Defense Council.

“France has been struck on the day of her national holiday … the symbol of liberty,” Hollande said, according to the Guardian. “France as a whole is under the threat of Islamic terrorism. We have to demonstrate absolute vigilance and show determination that is unfailing.”

Prime Minister Manuel Valls spoke out against terrorism, which he called “a threat that weighs heavily upon France and will continue to weigh for a long time.”

“We are facing a war that terrorism has brought to us,” he said, the AP reported. “The goal of terrorists is to instill fear and panic. And France is a great country, and a great democracy, that will not allow itself to be destabilized.”

Leaders around the world responded to the attack, and Twitter users were using the hashtag #PrayForNice. “We cannot let ourselves be divided by religion because that’s exactly what the terrorists want,” President Barack Obama said Friday.

Write to Simon Lewis at simon_daniel.lewis@timeasia.com and Tessa Berenson at tessa.berenson@time.com. 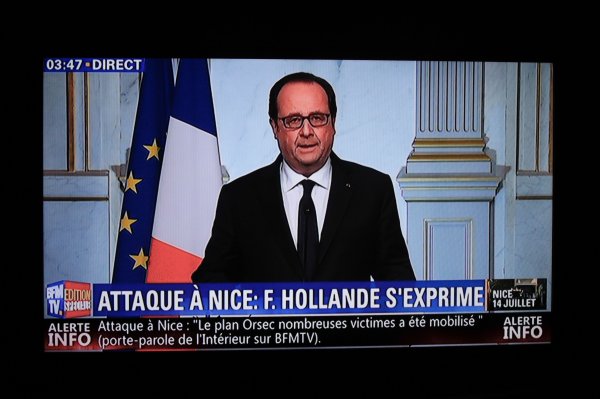 Hollande Extends France's State of Emergency After Nice Attack
Next Up: Editor's Pick