Beyoncé Is One Step Closer to the Elusive EGOT

After receiving four Emmy nominations today for Lemonade, Queen Bey is inching closer to achieving the awards grand slam of American showbiz: snagging an Emmy, a Grammy, an Oscar and a Tony, or “EGOT.”

Beyoncé already has an abundant collection of Grammys from her musical work over the years — in fact, she’s been nominated more times than any other musician— so that’s one category down. In 2006, a few Dreamgirls song were nominated for Oscars, but Bey didn’t snag that prize, and she has yet to appear on Broadway to qualify for a Tony. Given her extensive experience as a showman, it’s hard to imagine anything she acted in would do anything less than bring the house down, though.

At this year’s Emmys, Lemonade has been nominated for Outstanding Variety Special, Outstanding Production Design For A Variety, Nonfiction, Event Or Award Special, Outstanding Picture Editing For Variety Programming and Outstanding Directing For A Variety Special. For the first award, she’s up against big names like Adele and Amy Schumer, and events like The Kennedy Center Honors and The Late Late Show Carpool Karaoke Primetime Special. Lemonade is a whole other cup of the tea from those fellow nominees, though.

Beyoncé is early on in her career for this kind of potential accolade. Only 12 showbiz legends have ever completed the EGOT challenge, including Audrey Hepburn, Rita Moreno and Whoopi Goldberg (a few more, like Barbra Streisand, have won it thanks to honorary awards given for their body of work). 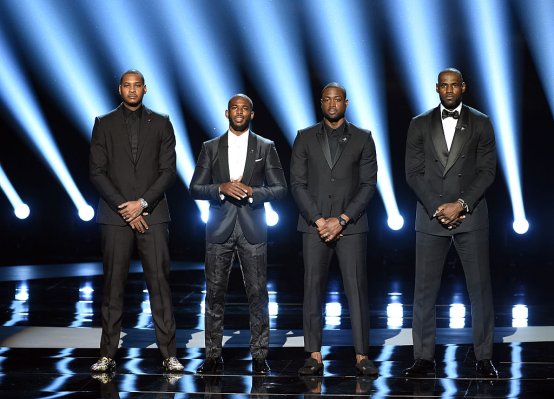 Read LeBron James and Carmelo Anthony's Powerful Speech on Race at the ESPY Awards
Next Up: Editor's Pick