They make an improbable pair: the entertainer and the ideologue; one brash, one mild; a billionaire Manhattanite and a Midwestern Boy Scout. But Donald Trump announced on Twitter Friday that Indiana Gov. Mike Pence is his running mate.

Trump wasn’t hunting for a kindred spirit. By tapping Pence for the role, he’s getting a movement conservative out of central casting, a seasoned politician whose selection may soothe Republicans still skeptical that Trump is one of them.

Pence was the preferred choice of GOP insiders, and on paper it’s not hard to grasp why. The snowy haired Hoosier, 57, is a steady pro who’s run a state house in a vital region for the party. He can help Trump navigate the halls of Congress, where he rose during his dozen years of service to chairman of the House GOP Conference as well as the Republican Study Committee, a powerful incubator of conservative policy.

Pence is a foreign policy hawk with ironclad fiscal credentials, a squeaky-clean image and extensive ties to the religious right. And while he’s more comfortable in the church pews than the C-suite, he’s also a favorite of superrich GOP donors like the billionaire Koch brothers, who have so far refused to crack open their wallets for Trump.

All of which is why allies pushed for the understated pol to complement the mold-breaking outsider on the Republican ticket. “The guy might have been born to be Vice President,” says Cam Savage, a veteran GOP strategist from Indiana.

There’s plenty in his resume for Republicans to like. Pence was a rare conservative ideologue to climb the party ladder while checking its leadership. He compiled a record of cutting taxes and spending, and opposed big-spending bills backed by other Republicans, including No Child Left Behind, the Troubled Asset Relief Program and Medicare Part D. He was known on the Hill as a principled conservative and a shrewd operator.

“He would bring a slate of experience on Capitol Hill … that clearly Mr. Trump doesn’t have,” says Rep. Jeb Hensarling of Texas, a powerful Republican congressman who knows Pence well. “His voice comes as close to Ronald Reagan’s voice as any.” Pence’s addition to the ticket, says former Rep. John Shadegg of Arizona, will impose “a message of discipline” on a campaign with a penchant for controversy.

If the pick is an olive branch to the party he’s crashed, it’s also a rare case of Trump going with safety over flash and guidance over gut instinct. Campaign chairman Paul Manafort led a cadre of allies, including senior Trump adviser Kellyanne Conway, in pushing for Pence, whom Trump did not know nearly as well as the other members of his vice-presidential short list, former House Speaker Newt Gingrich and New Jersey Gov. Chris Christie.

Their whirlwind courtship in recent days—including joint campaign events and meetings over shared meals—was a chance for not only Trump but also his family to take stock of the prospective partnership. Trump’s three eldest children and son-in-law Jared Kushner have emerged as some of his most powerful advisers. As a senior Trump adviser explained: “It’s a family decision.”

Pence clearly won them over. It’s less obvious how he’ll help Trump win the White House. Trump told the Wall Street Journal he wanted an attack dog, a “fighter skilled in hand-to-hand combat” who would defend him from withering criticism and help wage an unorthodox campaign over the television airwaves. In Christie he had a pit bull perfect for the role, a brawler who would eagerly spend the next four months savaging Hillary Clinton. Gingrich is a national figure with a similar fondness for florid partisan attacks. Though Pence came up through the ranks of conservative talk radio—he once described himself as “Rush Limbaugh on decaf”—he lacks that same feel for rhetorical combat.

Both Christie and Gingrich would have brought personal baggage to the race that Pence does not. But the Indiana governor is not quite the safe choice that his allies claim. Indeed, his lack of a national profile means that many voters would be finding out about his political liabilities for the first time.

Last spring the Indiana governor blundered into a disastrous social battle by signing a controversial bill known as the Religious Freedom Restoration Act. The law codified the right of individuals and businesses to assert their religious beliefs against government burdens. Critics cast it as license to discriminate against gays and lesbians. During the ensuing uproar, Pence managed to alienate virtually everyone. Liberals were infuriated. Indiana corporations and business lobbies revolted. Some social conservatives, eager to go to battle over RFRA in the wake of the same-sex marriage defeat, felt betrayed when Pence softened the language on the bill. “It was the worst we’ve ever been stabbed in the back by a Republican,” conservative radio-host Steve Deace complained to Politico.

Gay-rights groups will use Pence’s record on social issues as a rallying cry. In 2006, during a speech on the House floor urging a Constitutional amendment to ban same-sex marriage, Pence said that “societal collapse was always brought about following an advent of the deterioration of marriage and family.” He supported the Defense of Marriage Act, opposed the Supreme Court’s ruling that made marriage equality the law of the land, and considered amending Indiana’s constitution to outlaw marriage equality until he was dissuaded by his own party. Pence opposed the Employment Non-Discrimination Act, the repeal of “Don’t Ask, Don’t Tell,” and a hate crimes-prevention bill that he decried as a “radical social agenda.”

Trump has been careful during his campaign to avoid offending LGBT groups. Now his vice-presidential pick will galvanize gay voters and their wealthy supporters, sparking a social backlash that could damage the Republican ticket. Even in conservative Indiana, Pence’s welcome has worn thin. Polls show him locked in a tight re-election battle, and some of the voices calling for Trump to enlist his services came from Indiana Republicans hoping to swap in a fresh gubernatorial candidate.

This being Trump, he dragged out the drama. Four years ago, Mitt Romney treated his clandestine meetings with vice-presidential nominee Paul Ryan like a state secret; by the end, Ryan was dodging reporters by jogging through the Wisconsin woods as he prepared for his roll-out. Trump eschewed the elaborate subterfuge. As he got to know Pence over meals and campaign rallies, he turned the Conrad Hotel in downtown Indianapolis into a de facto campaign war room and walked through the front door of Pence’s red-brick home in full view of the cameras, his children in tow.

By Thursday morning, a presidential candidate who rose through the primaries by shredding conservative orthodoxies had closed in on picking one of the most conservative members of the party as his running mate. Just over two months ago, Pence endorsed Texas Sen. Ted Cruz over Trump before the Indiana primary. Though the scheduled Friday morning announcement in New York was delayed because of the attack in Nice, France, a rescheduled announcement is expected soon, with the two standing together, political polar opposites, as the Republican presidential ticket.

With reporting by Zeke J. Miller/Cleveland, Ohio, and Will Drabold/Washington 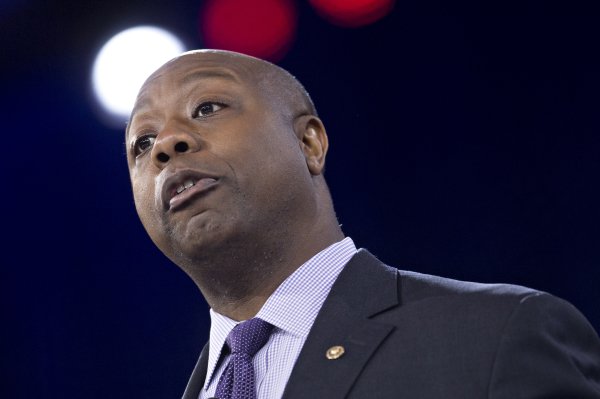 Read Senator Tim Scott’s Candid Account of Getting Stopped by Police
Next Up: Editor's Pick