There Is a Simple Solution to America’s Policing Problem: More Female Cops

A Dallas police officer pauses for a moment in the early morning after a sniper shooting, which left five police officers dead, in Dallas, on July 8, 2016.
LM Otero—AP
By Jay Newton-Small

From Cagney & Lacey to The Closer, Hollywood has long dreamed of powerful women police officers, unfortunately the reality on the ground is nothing like what we see on the screen.

In 2013, the most year where statistics are available, just 13 percent of police officers nationwide were women, according to the National Center for Women & Policing. That number is likely lower in rural areas as the group tended to survey urban forces, which are more likely to hire women. I use the past tense here because the Center, due to lack of funding, has essentially been defunct for the last three years, leaving America with no national association for female police.

And yet America has never needed female cops more. In an era of Ferguson, riots in Baltimore and record high police shootings, increasing the number of female cops would go a long way to solving many of these problems. Women police almost never use excessive force, though they use the same amount of regular force. Studies show they draw their weapons less, tend to look for non-physical solutions and are much better at community outreach.

“What women never think is: ‘Can I wrestle this guy to the ground?’ She’s more likely to control the situation with voice and presence than any kind of physical tool,” former Houston Mayor Anise Parker told me for my chapter of women in law enforcement in my book, Broad Influence: How Women Are Changing the Way America Works.

Women officers tend to save their municipalities a substantial amount of money. Lawsuits alleging the use of excessive force by police cost taxpayers millions of dollars every year. Female officers are the defendants far less often than men, and male officers cost between 2.5 and 5.5 times more to taxpayers because of payouts to settle such suits, according to a study by the Feminist Majority Foundation and the National Center for Women & Policing.

For example, the City of Los Angeles paid $63.4 million between 1990-1999 in lawsuits for excessive force and other violent complaints against male officers. By contrast, it paid $2.8 million for similar allegations against female officers, but not one of those complaints was for excessive force. Male officer payouts in cases of brutality and misconduct were 23 times the amount paid in cases involving women; in cases involving killings, settlements for male-involved lawsuits were 43 times of those involving women; and 32 times the amount paid to settle female-involved assault and battery cases.

While this does reflect the fact that there are simply more male cops than females cops, notably, there was no difference in the amount of routine force reported by gender, only in the use of excessive force. Incidents in which suspects are maimed or killed in custody are subject to an excessive force investigation. Generally, there are substantially fewer public complaints against female police, according to another study, such as for rudeness or other bad behavior.

Almost all of the high-profile cases in recent memory—Eric Garner, Michael Brown, Laquan McDonald, Tamir Rice, Walter Scott, Alton Sterling, Philando Castile—have involved male police officers. (The exception: One of the officers involved in the Freddie Gray case in Baltimore is a woman, though the criticism of her was that she did not call for medical attention when she saw he was unresponsive.)

Women have a long history of social work and community outreach, and female police officers tend to excel at community building. Ever since women started serving on the police force, they have focused on community outreach. The first female police officers—Lola Baldwin in Portland, Oregon, in 1908 and Alice Stebbins in Los Angeles in 1910—were former social workers, and most early female officers dealt almost exclusively with women and children. Study after study show that the tools of social work—an overwhelmingly female occupation—is critical in modern policing, and that women’s softer skills may counter the escalation of conflicts.

Yet women remain underrepresented in law enforcement because of “widespread discriminatory hiring and selection practices,” according to the National Center for Women & Policing. Advancement has been slow. From 1971, when women accounted for just 1.4 percent of police departments to 13 percent of police officers nationwide in 2013.

There is also a dearth in any recent research on women in police forces. Most studies are from the 1980s or 1990s when the first waves of women were integrating. There are no current statistics on women in police academies and there are no discernable, ongoing moves to add women to police forces. Despite the evidence that women help make policing better, little is being done beyond efforts by individual forces, which vary by city and state.

Some programs are vigorous—Dallas, for example, has 26 percent women on its police force. Others are nonexistent. Nationally, next to nothing is being done to change hiring policies, develop training programs, or launch recruitment drives. And the Federal Bureau of Investigation remains one of the most challenging workplaces for women in Washington; only 19 percent of agents are women.

As President Obama on Thursday sits down with activists and cops at the White House, the discussion has largely revolved around race. What is lacking is a discussion of how gender might also impact, and help solve, the problem.

Jay Newton-Small is author of the recent book, “Broad Influence: How Women Are Changing the Way America Works.” Available on Amazon.com and bookstores everywhere. 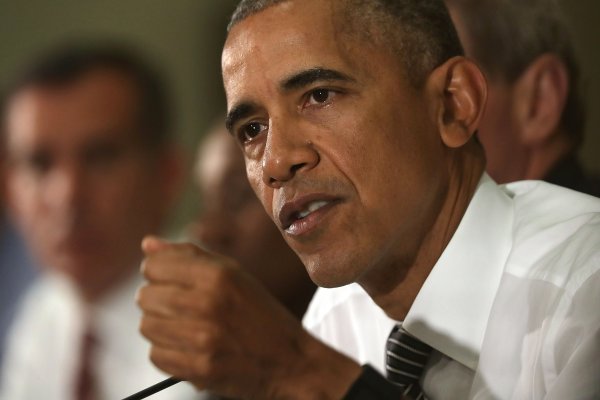 President Obama Convenes Police and Activists to Mend Relations
Next Up: Editor's Pick