The Republican National Convention rules committee abruptly recessed for more than four hours Thursday morning, as senior party officials huddled with anti-Trump delegates to hash out an agreement to speed up the consideration of the party rules.

Facing dozens of amendments, Rules Committee Chair Enid Mickelsen claimed there was a problem with the committee’s printers preventing the consideration of the committee’s business all morning. But the true reason for the delay, according to GOP officials, was a secret meeting convened by Republican National Committee Chairman Reince Priebus, with Utah Sen. Mike Lee, Colorado delegate Kendal Unruh, and other influential delegates opposed to Trump to try to drop extraneous amendments avoid drama in the televised meeting room.

Anti-Trump delegates are hoping to use the rules process to unbind all of the delegates to the Republican National Convention, in hopes of unseating the party’s presumptive nominee next week. Priebus, who has been openly critical of the unbinding effort and has predicted its failure, is looking to broker a compromise to minimize the acrimony, as he seeks to keep the focus of the week on party unity.

The volume of amendments offered was viewed as potentially disruptive, and the potential for the debate on the binding to become an embarrassment for the party brought Priebus to call the meeting.

According to a source familiar with the substance of the meeting, the gathering focused more on reforms to the RNC and 2020 nominating calendar pushed by former Virginia Attorney General Ken Cuccinelli than the effort by Trump opponents to unbind delegates to vote their conscience. Cuccinelli’s support is seen as a crucial pillar of support for the free-the-delegate movement. If he cuts a side deal with the RNC, Republican leaders hope the chances of floor drama Monday would decrease significantly. 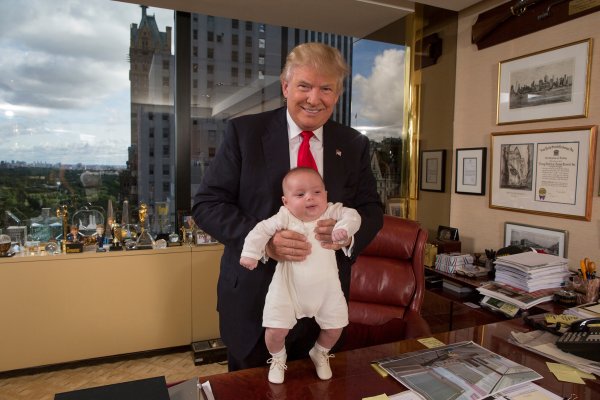 20 Photographs That Show the Essential Donald Trump
Next Up: Editor's Pick