It sounded more like a lark than a scientific study when a handful of Japanese researchers set out to discover whether something special–and clinically therapeutic–happens when people spend time in nature. They were inspired by a new recommendation from the Forest Agency of Japan, which in the early 1980s began advising people to take strolls in the woods for better health. The practice was called forest bathing, or shinrin-yoku, and it was believed to lower stress–but that hadn’t been proved. Since then, a large body of evidence has shown that spending time in nature is responsible for many measurable beneficial changes in the body.

In one early study, Yoshifumi Miyazaki, a forest-therapy expert and researcher at Chiba University in Japan, found that people who spent 40 minutes walking in a cedar forest had lower levels of the stress hormone cortisol, which is involved in blood pressure and immune-system function, compared with when they spent 40 minutes walking in a lab. “I was surprised,” Miyazaki recalls. “Spending time in the forest induces a state of physiologic relaxation.”

Another researcher, Dr. Qing Li, a professor at the Nippon Medical School in Tokyo, found that trees and plants emit aromatic compounds called phytoncides that, when inhaled, can spur healthy biological changes in a manner similar to aromatherapy, which has also been studied for its therapeutic benefits. In his studies, Li has shown that when people walk through or stay overnight in forests, they often exhibit changes in the blood that are associated with protection against cancer, better immunity and lower blood pressure.

“The quiet atmosphere, beautiful scenery, good smells and fresh, clean air in forests all contribute to the effects,” says Li.

1 IT CAN LOWER BLOOD PRESSURE

Spending time outside is good for the heart, research shows, and since high blood pressure costs the U.S. approximately $48.6 billion per year and affects 1 in 3 Americans, visiting green spaces may be a simple and affordable way to improve heart health. A large June 2016 study found that nearly 10% of people with high blood pressure could get their hypertension under control if they spent just 30 minutes or more in a park each week. “If everyone were to make time for nature, the savings on health care costs could be incredible,” says study author Danielle Shanahan, a research fellow at the University of Queensland in Australia.

The fresh air could be one factor, since air pollution has been linked to a higher risk for heart attacks, but since the study participants lived in cities (and therefore were also being exposed to air pollution), that likely isn’t the only driver. Scientists think stress reduction also plays a part. “Nature is undemanding,” says Shanahan. “It requires effortless attention to look at the leaves of a tree, unlike the constant emails at work or the chores at home.”

Trees’ natural fragrance may also play a role, as some studies have shown that phytoncides lower blood pressure by quelling the body’s fight-or-flight response, which stresses the body.

2 EXPOSURE TO IT CAN INCREASE AWE

Looking at a stunning waterfall or undulating countryside can do more than enrich your Instagram feed: it can also elicit feelings of awe that bring a number of health benefits. In a 2015 study, researcher Paul Piff of the University of California, Irvine, found that people who spent 60 seconds looking up at towering trees were more likely to report feeling awe, after which they were more likely to help a stranger than people who looked at an equally tall–but far less awe-inspiring–building.

“Experiences of awe attune people to things larger than themselves,” says Piff. “They cause individuals to feel less entitled, less selfish, and to behave in more generous and helping ways.” The benefits of awe are physical too: regularly experiencing moments of awe has been linked to lower levels of inflammatory compounds in the body.

Everyday interactions with nature can also benefit. An April 2016 study of 44 cities found that urban areas with more parks scored higher on measures of community well-being. That’s likely because parks give people opportunities to socialize and be active with their neighbors, which could improve health, the researchers say. People in cities with lots of green space were more likely to report having more energy, good health and a sense of purpose too.

An April 2016 study published in the journal Environmental Health Perspectives reported that women living in areas with a lot of vegetation had a 12% lower risk of death from all causes compared with people in the least green places. That could be thanks to cleaner air, but nature may also offer its own medicine. Li’s research at Nippon Medical School shows that when people walk through a forest, they inhale phytoncides that increase their number of natural killer (NK) cells–a type of white blood cell that supports the immune system and is associated with a lower risk of cancer. NK cells are also thought to have a role in combating infections and autoimmune disorders and tamping down inflammation, which contributes to a wide range of ailments, including heart disease and diabetes.

In a 2010 study, researchers found that people who took two long walks through forests on consecutive days increased their NK cells by 50% and the activity of these cells by 56%. Those activity levels remained 23% higher than usual for the month following the walks. In another study, Li and his co-authors found that infusing people’s hotel rooms with phytoncides had some of the same anti-cancer-cell effects as those seen among people walking through forests.

4 IT CAN HELP WITH DEPRESSION AND ANXIETY

Not surprisingly, urban dwellers are far more likely to have anxiety and mood disorders than people who live in rural areas. That’s the bad news, since about 80% of Americans live in cities. The good news is that a small 2015 study published in the Proceedings of the National Academy of Sciences found that people who walked for 90 minutes in a natural setting, such as a forest or a nature park, were less likely to ruminate–a hallmark of depression and anxiety–and had lower activity in an area of the brain linked to depression than people who walked in an urban area. “Accessible natural areas may be vital for mental health in our rapidly urbanizing world,” the study authors write.

The exact mechanism of how nature helps mood disorders is unclear, but researchers agree that at the very least, time in nature tends to lift spirits. “When you have a short blast of nature exposure, people’s moods go up,” says Ming Kuo, an environment and behavior scientist at the University of Illinois at Urbana-Champaign. Another possibility is that the air near moving water, forests and mountains contains high levels of negative ions, which are thought to potentially reduce depression symptoms, according to a study in Frontiers in Psychology.

5 IT MAY HELP WITH ADHD SYMPTOMS

Small studies in kids with attention-deficit/hyperactivity disorder (ADHD) have suggested that nature walks could be a potential natural treatment to improve attention. In one study, a team led by Kuo of the University of Illinois at Urbana-Champaign had kids with ADHD take three 20-minute walks, without their medication, in different locations: a park, a neighborhood and an urban area. When the researchers tested the children afterward, they found that after a park walk, the kids were able to concentrate substantially better than after a walk in the other settings. In a separate 2011 study, Kuo and her colleagues found that children who regularly played in outdoor areas had milder ADHD symptoms, according to their parents, than children who played indoors or in areas with less nature access. “Nature gives the part of the brain that’s used in effortful concentration a rest,” says Kuo. “If you spend time doing something mentally relaxing, you feel rejuvenated.”

People without ADHD symptoms can also improve their attention and concentration by interacting with nature, evidence suggests. One University of Michigan study found that people improved their short-term memory by 20% after a nature walk but had no changes after walking through city streets.

6 EVEN FAKE NATURE HAS BENEFITS

Before you start planning your escape to the countryside, consider this: “There is plenty of evidence that you will get a range of benefits even if all you can manage is putting a plant in your room or looking at trees through your window at home,” says the University of Queensland’s Shanahan.

Research shows that even if they’re artificial, the images, sounds and smells of nature can have positive health effects. Listening to nature sounds over headphones, for instance, has been shown to help people recover faster from stress–which might explain why so many spas employ nature sounds in their treatment rooms.

Several studies have also shown that having a window view can improve attention, reduce stress and even help people in hospitals heal after operations. One widely cited study of people recovering from abdominal surgery found that those with tree-lined views were released faster from the hospital, experienced fewer complications and required less pain medication than people whose rooms faced a brick wall. 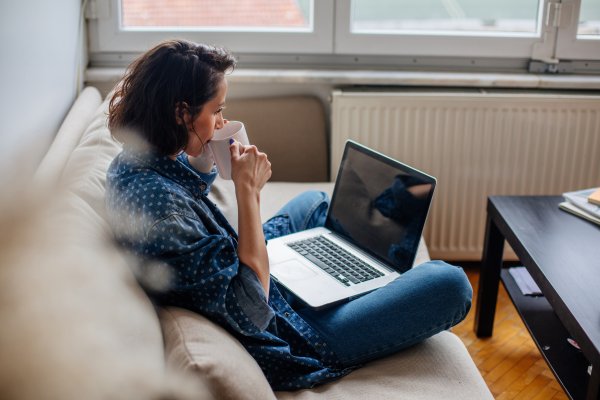 Struggling to Focus? How to Improve Your Attention Span When 'the World Is Sick'
EDIT POST