After Baton Rouge, Minneapolis and Dallas, Signs of Passionate Sanity

At a service for the five Dallas police officers killed on July 8, President Obama, with Michelle Obama and Dallas Mayor Mike Rawlings, said he had “spoken at too many memorials”
Carlo Allegri—Reuters
By Joe Klein

In the days after the Dallas police massacre, American civility took a few small steps forward. A good part of this was attributable to the relative silence of the usual suspects, the partisans, the politicians, the professional protesters, the talk-radio blowhards. Donald Trump canceled his rallies and tweeted an unobjectionable call for national unity. Hillary Clinton, who cannot be compared to Trump as an incendiary force in American life, canceled her rallies too, but showed her limitations by making an entirely banal statement on the need for a “national conversation” about race.

At that very moment, a sophisticated and sensitive conversation about race–to my mind, the most thoughtful one we’ve had in years–was already breaking out. It was visible on cable television, where a succession of journalists interviewed a succession of Dallas citizens and civic leaders who expressed neither hate nor anger nor intemperance, but sadness and empathy. Even the local extremists seemed moderate: an African-American protester named Mark Hughes quietly explained to a boggled Craig Melvin of MSNBC that he had brought his AR-15 to the protest march to exercise his Second Amendment rights, but when the shooting started he surrendered the rifle to a police officer so that he wouldn’t be confused with the shooter. (His face was tweeted out as a possible suspect anyway.)

The complexity of it all was typically American, confounding the notion of a binary black-white race war. The police officers involved in the incidents were a mélange of races; the freaked-out cop who shot Philando Castile in Minnesota was Latino. There were police officers being photographed, smiling with the protesters in Dallas; there were police officers of various races arresting Black Lives Matter leader DeRay Mckesson in Baton Rouge. “War in Dallas,” screamed the Drudge Report, but the reality seemed quite the opposite. Indeed, it could be argued that Dallas was a metaphor for the true state of race relations in the country–improving slowly, painfully but surely, after the explosions of police violence these past few years. The shooter, Micah Johnson, was a metaphor too–a radical, mentally disturbed outlier grabbing the headlines, distorting the actual state of the nation. In that way, he was reminiscent of Omar Mateen, the sexually confused and enraged loner who perpetrated the Orlando gay-bar massacre in June. Both were disturbed men who wrapped themselves in the cloak of larger movements–and the media, especially in the Orlando case, chose to portray the events as acts of terrorism rather than of individual derangement, abetted by the easy access of deranged individuals to powerful firearms.

All of which raises the question: What if we are not “falling apart” as a nation? What if we are, in fact, doing what democracies are supposed to do–gradually learning, through experience, how to solve our most vexing problems? The very presence of the cameras that recorded the apparently flagrant police shootings of Philando Castile and Alton Sterling is a sign of progress: in the future, given the use of police cameras and concerned citizens with phones, virtually every interaction between the police and the public will be filmed. (Given the presence of cameras in both those shootings, it is remarkable that the police reacted as outrageously as they did.) There were also some helpful voices in the crowd. There was Newt Gingrich, in a Facebook conversation with Van Jones, saying that “if you are a normal white American, the truth is you don’t understand being black in America, and you instinctively underestimate the level of discrimination and the level of additional risk.” And there was Dr. Brian Williams, part of the surgical team that treated the wounded Dallas officers, who admitted that as a black man, he was afraid of the police, and then recounted a time when he and his daughter had bought ice cream for an officer–just to show the police that they were appreciated by the community.

Those panic mongers who would compare the current moment to 1968 should note that there were few, if any, integrated surgical teams back then, and few black police chiefs or mayors in major American cities. There was no African-American Attorney General or Homeland Security director, like Loretta Lynch and Jeh Johnson, who set the civil, mournful tone in the hours after the massacre. And there was certainly no black President. There were few black journalists–like Craig Melvin–to report the situation with empathy, and there was a much smaller black middle class, people with homes and jobs and property to defend, to serve as a voice of stability. Those who argue that the fundamental hydraulics of race relations haven’t changed in the past 40 years, like the intellectual Ta-Nehisi Coates, are deluding themselves and misleading their followers.

The problem of racial extremism remains–as does the tendency of the media to give the loudest, angriest voices the most attention. There are white racists aplenty. There is the tangled question of Black Lives Matter, which Rudy Giuliani inaccurately called “racist.” It is, as the videos of the protests make clear, an integrated ad hoc group. Its protests have been largely peaceful–and effective to a degree that its leadership refuses to admit because of its ideological need to be pessimistic. The presence of the cameras, the efforts of many police departments to reduce community tension, is partly attributable to the protests led by Black Lives Matter.

At the same time, it is a movement that has been flawed from the start by its myopic focus on police violence–which, as Giuliani accurately asserts, is minuscule compared with the level of black-on-black violence in poor communities. It is stating the obvious–though few liberals ever state it–that police of all colors are going to react more warily and be more panicky in areas that are violent. The cops who overreacted disastrously in Baton Rouge were responding to a report of a crazy man brandishing a gun in front of a convenience store. The police officer who inexcusably shot Castile as he reached for his driver’s license was reacting to Castile’s statement that he had a gun. The gun craziness of this society is a conversation that hasn’t progressed nearly as far as our racial discussion.

The silence of the politicians was a blessing in the days after Dallas. In the past, both parties–and this is not a false equivalence–have exploited the racial divide. On the Monday after Dallas, Donald Trump re-emerged and gave what was, for him, a pretty reasonable speech, acknowledging the need for “fairness” in the application of justice, but reviving code words like “law and order” from the museum of Republican race-baiting; and ultra-conservative media sources like Drudge and Rush Limbaugh did their usual dirty work.

The Democrats–and their media surrogates like Al Sharpton–also indulged in their usual undifferentiated acceptance of any and all micro-grievances. If nothing else, the progress in Dallas implies that the Democrats’ divisive identity politics–the sorting of constituencies according to ethnicity, gender and sexual orientation–is beginning to seem dated too. Racialism–that is, the attempt to make benign distinctions according to race–isn’t as obnoxious as racism, but it inhibits the movement toward an egalitarian society.

In the end, there was President Barack Obama. His Dallas speech wasn’t the most memorable of his staggering 11 public eulogies after mass shootings. That honor goes to his talk in Charleston last year, when he sang “Amazing Grace.” But it was brilliant all the same, an appeal to reason on all sides that beggared the left- and right-wing sniping of recent days, and the past seven years, about Obama’s being somehow deficient in these instances, a vehement partisan taking the side of the protesters, a leader who had somehow made race relations worse.

This President once again proved himself a moderate in Dallas, a balanced teller of plain truths. He acknowledged that he had seen “how inadequate my own words have been” when it comes to lowering the temperature, but also that, paraphrasing Scripture, suffering “produces perseverance, perseverance to character, and character to hope.” There can be no gainsaying his message; it was impeccable. And there can be no denying that neither of the choices we face in this election, Donald Trump or Hillary Clinton, has the rhetorical wherewithal or emotional intelligence to lead, as Obama has, on this most painful of issues–or that either political party has found the right balance of candor and empathy. The country is, slowly, becoming a better place because of Obama’s leadership, and because of the willingness of local officials, like those in Dallas, to work at reconciliation. His passionate sanity will be sorely missed. 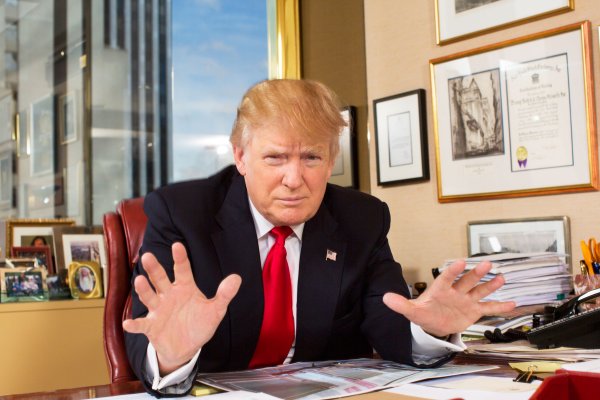 What a President Needs to Know
Next Up: Editor's Pick