A Quick Guide to Who's Who in Theresa May's New Cabinet

Hours after assuming her role as the new U.K. Prime Minister on Wednesday, Theresa May unveiled key figures in her new cabinet.

The key figures on her top team include Philip Hammond as Chancellor of the Exchequer, Amber Rudd as Home Secretary, and in a controversial move, Boris Johnson as Foreign Secretary.

Liam Fox returns to government as head of a new Department for International Trade while the newly created role of ‘Brexit minister,’ officially known as the Secretary of State for European Union Relations, will be filled by David Davis. George Osborne and Michael Gove are among those who have lost their frontbench jobs.

The second-female prime minister in Britain’s history is also expected to balance her cabinet with more female members of parliament (MPs) in senior positions. Till those announcements are made, here’s what we know about her top team:

Philip Hammond, Chancellor of the Exchequer
The former Foreign Secretary and long-time ally of May will take the position traditionally seen as second in command. He is seen as a safe pair of hands who will guide the country’s economy through the uncertainty sparked by the Brexit vote. The 60-year-old, who has been an MP since 1997, has handled complex ministerial briefs first as Transport Minister in the 2010 coalition government before becoming Secretary of State for Defence in 2011 and finally Foreign Secretary in 2014. In contrast to what outgoing Chancellor George Osborne said before the EU referendum, Hammond told the BBC on Thursday that there would be no emergency budget to address the vote’s economic aftershocks. Osborne had warned during the campaign that Brexit would trigger tax rises and budget cuts.

Amber Rudd, Home Secretary
Rudd, who was a prominent Remain campaigner and protegé of Osborne, has taken over May’s former role where she will oversee Britain’s counter-terrorism efforts, immigration and the police. At 52, Rudd becomes the most senior woman in government after May but joined the Cabinet only last year as Secretary of State for Energy and Climate Change. The former investment banker, financial journalist and venture capitalist is a relative newcomer to politics having only become an MP in 2010.

Boris Johnson, Foreign Secretary
The former Mayor of London, who had never held a cabinet position prior to his Wednesday appointment, was the leading campaigner for Britain to leave the E.U. The newspaper columnist and former Brussels correspondent, who has a history of diplomatic gaffes, began the initial stages of the Conservative Party leadership bid before dropping out unexpectedly when his ally Gove challenged him for the job. The New York-born Johnson studied at the prestigious all-boys boarding school Eton College before studying classics at Oxford University. He worked as a journalist for the London Times, the Telegraph and The Spectator, becoming an MP in 1999 and going on to become Mayor of London in 2008.

David Davis, Secretary of State for European Union Relations
This long-standing Euroskeptic will take up a new role already nicknamed “Brexit minister.” Davis, 67, once attempted to win the Conservative Party leadership in 2005—where he came in second to May’s predecessor David Cameron. He served as Foreign Office minister under John Major in 1994 followed by a number of shadow roles while Labour was in power from 1997 to 2010. He has been called an untraditional Conservative, having being brought up by a single mother on a council estate in London, and has clashed with May in past over her proposed surveillance legislation. He has a master’s degree from Harvard University, and from a recent article written in Conservative Home, it is suggested he will seek to keep Britain’s access to the single market.

Liam Fox, International Trade Secretary
The prominent Euroskeptic’s new mandate will be to secure new trade deals with the world, which the Leave campaign touted as a benefit to leaving the E.U. Fox, 54,who worked as a doctor before becoming an MP in 1992, has made two stabs as the role of leader of the Conservative Party: the first in 2005 against former Prime Minister David Cameron and the second, against May at the end of June. He resigned from his previous cabinet position as defence secretary in 2011 and voted against same-sex marriage in 2013. Fox was mentioned in the sleeve of the debut album of Natalia Imbruglia.

Elizabeth Truss, Justice Minister and Lord Chancellor
The former Secretary of State for Environment, Food and Rural Affairs takes up Gove’s former role as Justice Minister. Truss, usually known as ‘Liz,’ is also the first woman to become Lord Chancellor. Truss, 40, became a MP in 2010, when she was elected to her South West Norfolk seat. The qualified management consultant co-authored a 2012 booklet entitled Britannia Unchained that argued for more deregulation and alleged “the British are among the worst idlers in the world.” Unlike many of her cabinet colleagues Truss campaigned for Britain to remain in the E.U., arguing that the E.U. was responsible for major global environmental breakthroughs such as the reduction of acid rain and reducing the hole in the ozone layer.

Justine Greening – Education Secretary and Minister for Women and Equalities
The former international secretary became the first openly gay cabinet minister when she revealed in June that she is in a same-sex relationship. Born in the South Yorkshire town of Rotherham, the 47-year-old is also one of the few education secretaries to have attended a state school — or a public school, in the U.S. — without a selection criteria for students. The former accountant and finance manager was first elected as a Conservative Party MP in 2005, and went on to gain five years of cabinet experience under the 2010 coalition government. She too campaigned to remain within the E.U, and said after coming out: “I campaigned for Stronger In but sometimes you’re better off out.”

Michael Fallon, Defence Minister
Fallon stays in his role of Defence Minister. The ally of Cameron and Osborne became an MP in 1983, and has had stints as business minister and energy minister. He was also forced to apologize to London Mayor Sadiq Khan after alleging Khan associated with a Muslim cleric who supported ISIS—a claim that was not true. The former director of gym chain, Bannatyne Fitness, is seen as a steady hand in government and gave May his backing during her leadership bid.

Patrick McLoughlin, Party Chairman
The long-serving transport secretary, who was Cameron’s chief whip, has taken the role of Conservative Party Chairman. This means the 57-year-old is now responsible for the Cabinet Office, which is responsible for supporting the Prime Minister and her cabinet.

Gavin Williamson, Chief Whip
The 40-year-old was Cameron’s former parliamentary private secretary and campaign manager for May’s Conservative leadership bid. His promotion to chief whip, who is concerned with the discipline of the Conservative Party members, is considered a big step-up for Williamson.

Jeremy Hunt, Health Secretary
Hunt stays on in his role as Health Secretary— his department is currently in a standoff with junior doctors, who are striking over recent attempts to impose a new contract on them. Hunt is a contemporary of Johnson and Cameron from Oxford University. It was mistakenly reported on Thursday morning that he lost his job, and Hunt did not shy away from pointing out the error:

Chris Grayling, Transport Secretary
The 54-year-old’s latest role is seen as sideways move, not a promotion. As Justice Secretary, the Euroskeptic’s attempts at prisoner and court reform were criticized and largely done away with by successor Gove. Grayling also had roles as the employment minister and leader of the House of Commons. He was a television producer and management consultant prior to becoming an MP in 2001. He is seen as an adept political survivor who has shaken off a series of political controversies.

Damien Green, Work and Pensions Minister
The former Minister for Policing and Criminal Justice, a friend of May from university days and worked with her in the Home Office, is promoted to Secretary of the Department of Work and Pensions. He takes over from Stephen Crabb who resigned from the position following allegations about his private life. Green, 60, worked as a journalist before joining then Prime Minister John Major’s Policy Unit in 1992 and getting elected as an MP in 1997.

Andrea Leadsom, Environment Minister
Leadsom, who was May’s leadership rival just days before, has been promoted within her department to Environmental Secretary.The darling of Brexiteers dramatically left the leadership race on July 11 following reports that her C.V. was embellished and a London Times interview where she said being a mother, unlike May, gave her a “a very real stake” in the future of Britain— a claim she later apologized for.

Sajid Javid, Communities Secretary
Javid was previously business secretary and his move is seen as a demotion. He was criticized in recent months for his handling of negotiations with Tata Steel over the sale of its U.K. operations, a move that could cost 11,000 jobs. The son of a bus-driver from Pakistan, Javid went on to become Chase Manhattan Bank’s youngest vice-president at the age of 25. He moved into politics in 2010, working in the Treasury, Equalities Office and a stint as the Culture Secretary before the 2015 general elections.

James Brokenshire, Northern Ireland secretary
He replaces Theresa Villiers, who resigned on Thursday. Brokenshire, 48, worked under May as the Immigration Minister and was in favor of remaining within the E.U. He was a partner at an international law firm prior to becoming an MP in 2005. He has also served as Security Minister in the Home Office between 2011-2015, with responsibility for the country’s counter-terrorism strategy.

Greg Clark, Business and Energy Secretary
The former Communities Secretary has been appointed the head of the newly-created Ministry of Business, Energy and Industrial Strategy— which suggests parts of Leadsom’s department is being merged with the Business Ministry.

Karen Bradley, Culture Minister
Former Minister for Preventing Abuse, Exploitation and Crime minister Karen Bradley, who worked under May in the Home Office, is the new Secretary of State for Culture. Bradley, 46, is a former chartered accountant and will now oversee the government review if the BBC.

Alun Cairns, Welsh Secretary
Cairns, 45, remains as the Secretary of State for Wales. He campaigned for Britain to remain in the U.K. 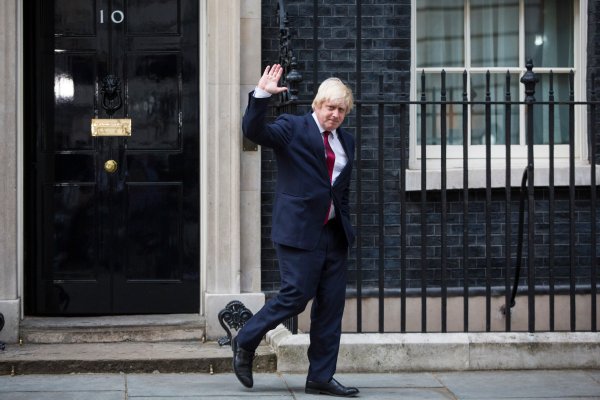