A ruling from an international tribunal this week—that China’s expansive territorial claims in the South China Sea (SCS) have no legal standing—dealt President Xi Jinping a minor setback and generated headlines around the world. But it’s inside China’s borders where Xi’s considerable strength will be tested. These five facts explain the challenges ahead for China and its formidable president.

For decades, the source of China’s economic strength has been its breakneck manufacturing pace. Between 2011 and 2013, China used more cement than the U.S. did in the entire 20th century. Impressive—but wholly unsustainable, since there is only so much cement a country actually needs. So China’s leadership decided to shift its economy away from an investment- and export orientation to a consumption-based one to ensure growth can continue at a more sustainable rate. Private consumption only accounts for 38 percent of China’s total GDP, according to reporting by the New York Times last fall; it needs to surpass 60 percent to bring it in line with the world’s more advanced economies.

The transition has been rocky at times, but it’s well underway. Consumption is fueling a much bigger piece of the economy than it has in the past, driving 66 percent of growth in GDP in 2015, according to Chinese state officials. China’s growth has slowed to a “mere” 7 percent, according to Beijing. The World Bank expects Chinese growth to slow to 6.3 percent by 2018; that still means it would be growing at three times the rate of the U.S. economy and four times the Euro area. But this slowdown has the world on edge, because few outsiders have complete faith in official Chinese statistics.

Read More: The Meaning of China’s Defeat In the South China Sea

To counter this slowdown at home, Xi knows that China must open new markets for its products abroad. Abruptly shutting down all those factories would put a lot of people out of work and set back consumption spending. Better to sell that concrete in other countries. In late 2013, Xi proposed the century’s most ambitious geopolitical venture to date: a series of infrastructure projects that will ultimately connect China (and more importantly, its exports and imports) to the West. Called “One Belt, One Road” (OBOR), the initiative is a network of roads, railroads, ports and pipelines that Beijing says will add $2.5 trillion to China’s trade account by 2025. Beijing also established the Asian Infrastructure Investment Bank to fund many of these projects. This is Beijing’s alternative to the Washington-based World Bank and International Monetary Fund. China has already spent more than $235 billion funding the various projects; if successful, OBOR will connect 65 countries, 4.4 billion people and 40 percent of the world’s GDP by both land and sea.

Trade doesn’t just fuel industry, create jobs, and boost a country’s bottom-line; it also helps build political relationships and goodwill. China invested a record $23 billion in Europe in 2015, a 28 percent uptick from the year before. And it did so at a moment when Europe was shaken by a succession of crises that forced other investors to flee. Europeans noticed that the Chinese stuck around.

It’s a similar story in Africa, where the total stock of Chinese investment grew 20 times over between 2005 and 2014 to $32 billion. Six months ago, Beijing promised another $60 billion in development assistance to the continent to help build up Africa’s infrastructure. In Latin America, Chinese banks dispatched $30 billion in loans to governments in 2015 alone—more than the World Bank and Inter-American Development Bank combined. China is using trade and investment to strategically engage new partners in every corner of the world.

And not for nothing, but China is crucially important to the economies of Malaysia (accounting for 15.75 percent of its overall trade), Vietnam (20 percent), and the Philippines (13.1 percent, as of the first half of 2015). Why is that important? Because these are the rival claimants in the South China Sea. And that’s a big part of the reason that friction there is highly unlikely to boil over into actual conflict—and why Xi and China can afford to take that court ruling in stride.

Yet engagement abroad does not prevent Xi from wanting a tighter grip at home. Xi knows that the only way forward for China is reform, and firm control of reform is only possible with firm control of the Communist party. To that end, Xi has presided over an extensive anti-corruption drive. By the spring of 2015, more than 400,000 officials had been disciplined; 200,000 had been indicted.

But as China braces for leadership changes at next year’s 19th Party Congress (Xi himself will stay on at least until 2022) many expected the corruption drive to slow down. The opposite has proven true, with the corruption campaign moving from the peripheries of provincial governments and state-owned enterprises to investigating central government and Communist Party officials. Xi has effectively used the anti-corruption push to sideline rivals, silence critics, and to try to restore the party’s image in the eyes of the people.

Xi’s authoritarian streak is not limited to China’s political and economic elites. China’s president is working to beat back potential domestic threats by controlling the spread of information within the country, and he’s doing as well as can be expected in a 21st century digitized world. There are more than a dozen government agencies tasked with limiting the information accessible to Chinese citizens on a daily basis. Facebook, Twitter and Instagram are blocked outright; others like LinkedIn are only allowed to operate if they play by Beijing’s rules. Then there’s the intimidation of journalists— last year, there were 49 journalists detained or imprisoned in China. Reporters Without Borders ranked China as the 176th “most free” country in the world out of 180 total, behind only Syria, Turkmenistan, Eritrea and North Korea.

But in a world rocked by complicated and interlocking crises, having an authoritarian leader has its benefits. If there is a can to be kicked down the road, Xi can kick it further and harder than anyone else while he figures out next steps. That matters a lot. 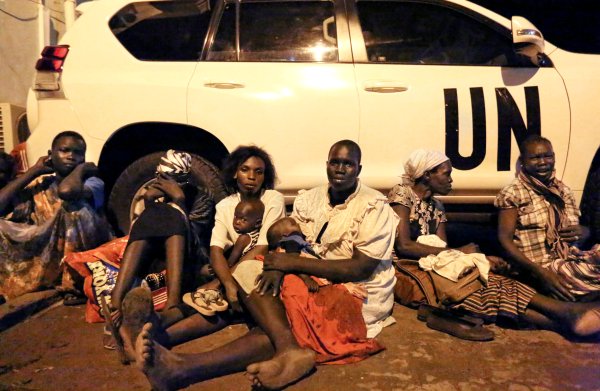 Suffering and Squandering Hope in a War-Weary Country
Next Up: Editor's Pick