Air Conditioning Is a Human Right

Edwards and Medlock are trial lawyers with Edwards Law in Austin.

In 2011, the State of Texas convicted Larry McCollum of forgery, for passing a bad check. He was supposed to serve a short prison sentence of two years, then go home to his family. Instead, the conditions inside Texas prisons gave him a death sentence. He died of heat stroke—indoors.

Over 120,000 beds in the Texas Department of Criminal Justice system do not have air conditioning, including the Hutchins State Jail near Dallas, where Mr. McCollum was imprisoned. As a result, the indoor heat index—the combination of temperature and humidity—frequently exceeds 100 degrees on hot summer days. Shortly before Mr. McCollum died, the Hutchins’ warden received multiple emails from the risk manager, who took a thermometer around to the dorms, stating the temperature inside the inmate dormitories reached 102 degrees by early afternoon, and that the heat index inside was likely 123. While Mr. McCollum baked inside his dormitory, his body temperature rose to 109.4. Eventually, his body began to seize, and he was hospitalized. When his wife and adult children were summoned, they learned his body temperature had permanently damaged his brain, and he would not survive.

According to the National Weather Service, in an average year, heat kills more people than floods, lightning, tornadoes and hurricanes combined. In all, during the past 18 years, over 20 men have died with the cause of death of heat stroke inside prison buildings constructed and maintained by the State of Texas. Though the count is likely much higher: When temperatures go over 90 degrees, the medical risk of heat stroke increases markedly, and it can lead to other causes of death, especially for people with certain common medical conditions like diabetes, high blood pressure, or asthma, or who take certain medications, including most mental health prescriptions.

Of course, not everyone exposed to these dangerous temperatures dies. Most inmates just suffer. At the Pack Unit near Houston—a self-described “geriatric facility”—elderly men sleep on the concrete floor, because it is slightly cooler than their beds. Inmates soak towels in restroom sinks, then drape them around their shoulders to try and keep cool. Desperate to stay hydrated, inmates drink gallons of water each day. Inmates testify the indoor temperatures are “like an oven.” When you visit a Texas prisoner during the summer, the first thing you notice is the sweat beading on his forehead and running down his face.

It isn’t just the inmates who suffer. The officers supervising them work in these dangerous environments. They patrol the 123-degree dorms. Officers sweat through heavy uniforms, including the standard-issue stab-proof vests. Multiple TDCJ officers have also been sent to doctors for heat exhaustion. Their only advantage is they get to go home when their 12-hour shifts are over, while the inmates remain. In a rare solidarity between the captors and the kept, the officers’ union supports inmates’ heat-safety litigation.

Thus, during Texas summers, air conditioning is no more of a “luxury” than indoor heating during Alaskan winters. Less than one percent of free Texans live in a home without air conditioning. (For comparison, similar numbers have no running water). Even in Iraq and Afghanistan, one of the military’s top expenses is air conditioning soldiers’ barracks. And while free citizens should be able to set their thermostat to whatever level they feel comfortable at (the Department of Energy conservatively recommends 78), imprisoning people in buildings where there is no thermostat to keep the temperature below 90 isn’t just uncomfortable, nor is it just dangerous—it’s a violation of a human right.

Increasingly, Texas state prisons stand alone. Virtually all federal prisons have air conditioning—including the “Alcatraz of the Rockies” in Florence, Colorado, which is home to the Unabomber, Ted Kaczynski; original World Trade Center bomber, Ramzi Yousef; and 9/11 conspirator, Zacarias Moussaoui. Arkansas prisons have been air conditioned since the 1970s. Federal courts in Arizona ordered Sheriff Joe Arpaio to keep the temperatures in his jail below 85 where any inmates took heat-sensitive psychiatric medication. Prisons systems where AC is only needed occasionally, such as certain parts of Washington State, have air conditioning for those few days each year when the temperature would otherwise be dangerous. The military prison for terrorism suspects in Guantanamo Bay has air conditioning. And even Texas requires its local county jails—where Mr. McCollum had been before his transfer to a state prison—to keep indoor temperatures between 65 and 85 degrees at all times.

Texas Department of Criminal Justice officials insist they take the indoor temperatures “very seriously” every summer. They provide 10-gallon jugs of ice water in the inmate dormitories. They install extra fans. They let inmates wear t-shirts and shorts in common areas instead of full prison uniforms. But they do nothing to lower the temperatures inside. One TDCJ executive testified the agency did a “wonderful job” preventing heat-illness during the summer of 2011—when ten men died of heat stroke inside. Texas refuses to recognize there is only so much ice water can do when the indoor heat index is 123.

Of course, parts of every TDCJ prison are air conditioned. The warden’s office. The infirmary. The visitation room. Even the armory—because, according to one long-time TDCJ doctor, the bullets for the officers’ guns “can’t do anything for themselves.”

Prisons will always be dangerous in many ways. Even while operating one perfectly, there will be fights between inmates, delays in receiving medical care and other unavoidable problems associated with punishing people by taking their liberty away.

But heat stroke is not one of these problems. Heat stroke indoors can be completely eliminated by installing air conditioning. It’s why state prisons in Texas are the only public buildings in the state without AC.

Nelson Mandela said “no one truly knows a nation until one has been inside its jails. A nation should not be judged by how it treats its highest citizens, but its lowest ones.” When the courts judged him, Larry McCollum wasn’t sentenced to die. But TDCJ killed him anyway. They locked him in an obviously dangerous environment, then looked the other way.

Jeff Edwards and Scott Medlock are trial lawyers with Edwards Law in Austin, who specialize in civil rights. Edwards Law represents the families of eight men who died of heat stroke in Texas prisons, as well as elderly and disabled inmates at the Pack Unit prison in class-action litigation challenging high indoor temperatures. 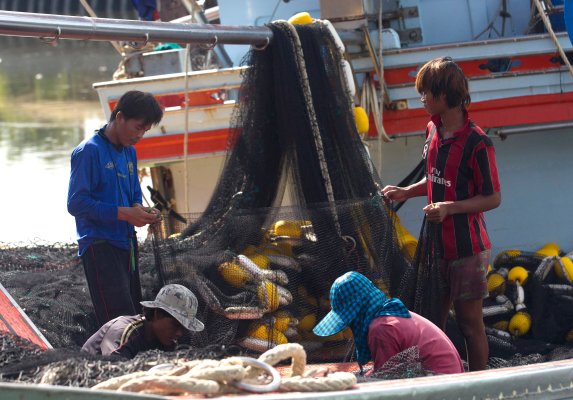 Report: Nearly 46 Million People Are Living in Slavery Worldwide
Next Up: Editor's Pick