First Openly Gay Republican on GOP Platform Committee: 'Why Am I Even Here?'

Over the last two days, Rachel Hoff has considered leaving the Republican Party for the first time in her life.

The think tank defense analyst from Washington, D.C., who is the first openly gay Republican to serve on her party’s platform committee, sat through a slow march of disappointments that led her to that point days before the 2016 convention. Her peers voted down every amendment that offered softened or inclusive language about the LGBT community, instead doubling down on the belief that marriage is between only one man and one woman and other socially conservative positions.

On Monday, Hoff made an emotional appeal asking the committee to replace some of those sentiments with language she had crafted, stating that marriage is a fundamentally important institution and that “there are diverse and sincerely held views on marriage” within the party. “We are your daughters. We are your sons, your friends, your neighbors, your colleagues, the couple who sits next to you in church,” she said. “Freedom means freedom for everyone, including gays and lesbians … And all I ask today is you include me and those like me.” By an unofficial vote of about 30 to 82, the amendment failed.

TIME spoke to Hoff about her experiences so far in Cleveland, what it means to be both gay and Republican and why she still hopes for change.

How did you become a Republican as a young woman?

It was when I was in high school and we were having a debate in my government class, about whatever the issues of the day were back in the ‘90s. And after we had that debate my teacher came up to me and told me he thought I was a Republican. And it was not a good thing. It was almost like he was warning me that I might be a Republican. My parents were not into politics at all, and so I didn’t really know what Democrats and Republicans stood for. So I went home and probably asked Jeeves what Republicans stand for. What I read really resonated with my own beliefs and principles I was coming into as a young adult.

What do Republicans stand for in your view?

What the Internet told me was that they stood for individual freedom, for limited government, for the idea that you could make your own decisions better than the government could make them for you, whether that was decisions about how to spend your personal life or decisions about how to spend your money, and a strong national defense. That was something that was always very important to me and went on to define my career.

When did you first realize there were parts of that party that don’t approve of homosexuality?

I remember that was a very, very hard day for me. I went to college in Massachusetts, and my senior year was 2004. That was the year the state Supreme Court issued their ruling [allowing same-sex marriage], which was the first in the country, a real landmark case. My senior year was also when I realized I was gay. So I had just come out. And I went down to the state capitol to observe the protests.

There was this gay community, which I was intrigued by but not a part of. And there were the conservatives on the other side, who had this political belief that I was supposed to be for because that’s what you believed if you were conservative. And I didn’t feel part of either group, and I didn’t really know what group I wanted to be a part of. But the conservatives’ rhetoric and their signs and their whole approach was very hurtful, very offensive.

At this point, more than a decade later, do you still have that same feeling of being torn between two groups or have you reconciled that ambivalence?

I get that question a lot, like how can you be gay and Republican? Those are both parts of who I am, so I don’t have to reconcile them. I have to reconcile my interactions with both of those communities and both of their beliefs about the other community. Even including the last two days, I have received more backlash and opposition in the gay community for being Republican than I have in Republican circles for being gay.

Socially it’s just very, very acceptable within the gay community to say mean things about the Republicans, to, when you meet a gay Republican, to accuse them of being a self-hating gay person. Whereas for Republicans there is certainly a lot of harmful rhetoric and hurtful rhetoric. We see that in the platform we passed this week. But on a personal basis, I can’t think of a single time where anybody has said anything mean to my face, other than not supporting my constitutional rights. Clearly that’s offensive to me in a different way.

So when you get that incredulous question about how you are both gay and Republican, what do you tell people?

What usually comes out is that I clearly disagree with my party on this issue, on marriage, on LGBT rights. But that’s one part of who I am and that’s one issue that I care about. Were I to be a Democrat because they’re for equality and LGBT rights, there would be a whole list of issues I would disagree with that party about. So I wouldn’t feel more at home there, just because on this one issue I’m like-minded. To me, being an Independent has never really been an attractive option, though I did think about it over the last couple days.

What did you think being on the platform committee was going to be like and what were you hoping to achieve?

I ran for the platform committee because I wanted to attempt to soften language on LGBT issues, though I also have other priorities like national security issues and representing D.C. First of all, it was important that I be vocal about being gay. I’ve been out for 10 years now. So it’s not like I came out at the platform committee. But I really wanted to say it there, because I thought it was important that the people in the room, particularly those who are in favor of traditional marriage and against LGBT rights, be reminded that they were talking to a gay person.

When our platform comes out next week, it’s going to be a big letter to all Americans, including LGBT Americans, about why they should vote for us. And right now I don’t think they have much reason to do so. … I hoped that I might have some sort of softening effect on what people said and did. It does not appear to have had that effect based on the language that came out of the committee, but I still think that it’s important for people to know that you’re in the room.

Did you think you could get the votes or were you more intent on saying your piece, without much hope of that?

The amendment that I offered was not for marriage equality or to support the Supreme Court Obergefell decision or to embrace LGBT rights or to address the transgender bathroom issue. I really wanted to keep it focused on what I thought was a reasonable approach, just acknowledging and respecting that Republicans have different beliefs on these issues. Had I gone in there with some sort of marriage equality amendment, I certainly would have had zero hope that it would have passed. I was optimistic that the amendment that I offered would get more support, but I don’t think there was a time where I thought it would pass.

There was a back and forth in which another delegate argued for LGBT inclusive language and someone else responded to her, alleging that she was suggesting everyone who didn’t agree with her was a bigot. People clapped in agreement. She said that wasn’t her intention, but it was tense. What were you thinking during that exchange?

The reality is that all of us who support LGBT rights got frustrated. Another member offered an amendment to stand with LGBT people around the world who are targeted by violence and terrorism, and that went down in flames. In another section, the Orlando attack was mentioned, so I offered an amendment to describe it as ‘the terrorist attack on the LGBT community in Orlando.’ And they wouldn’t even do that. We knew that the platform committee wasn’t our home turf, and I did not expect to win every amendment, but I also did not expect the rigidity with which the committee would refuse to even mention the LGBT community more broadly in a positive way.

What do you make of that rigidity?

I don’t know. It could be just extremely well organized and tightly controlled influence from the traditional marriage activists. It could also be that people … are afraid of some slippery slope, wherein that would put us down that path toward supporting LGBT rights. Or maybe there’s a concern that even a single positive reference would hurt us with social conservatives, but I think that’s absurd. I give social conservatives much more credit than being turned off by language like that.

Is there a risk the party is running of alienating young voters by not being more inclusive of the LGBT community?

The demographic realities are clear on this issue. Young voters overwhelming support marriage equality—and even young Republican voters support marriage equality. There’s a lot in the Republican Party that could appeal to young voters, but they won’t even consider voting Republican because of our stance on these issues. Right now our party is not even an option for them, by and large. But that’s not the reason we should evolve on those issues. The reason why we need to change our stance is that it’s the right thing to do and because it’s in line with Republican principles of liberty, freedom and equality.

You mentioned that you had given some thought to being an Independent over the last couple days as these meetings went on. What frustration brought you to that point?

It wasn’t the marriage stuff. I had anticipated that my amendment would not pass. It was the amendments where the committee members refused to even stand with the basic human rights of LGBT individuals. We name so many individual groups in that document, and let’s name LGBT people. When they refused to even do that, I thought, what do we even stand for? Why am I even here? … These last few days is the first time I ever thought about leaving the Republican Party. But I’ve decided not to.

My spirits were lifted in certain ways by what happened this week. There was a lot of good that came out of the platform compared to 2012. [Fewer sections] of the platform have anti-LGBT language. And some include language about employment non-discrimination. Also I was really encouraged by the number of people who raised their hand and voted for respecting the diversity of opinion in the party on marriage. There is clearly a lot more work to be done. And if me, and people like me, advocates for LGBT rights, if we all just leave, then the party’s never going to get better. So the plan is to stay. 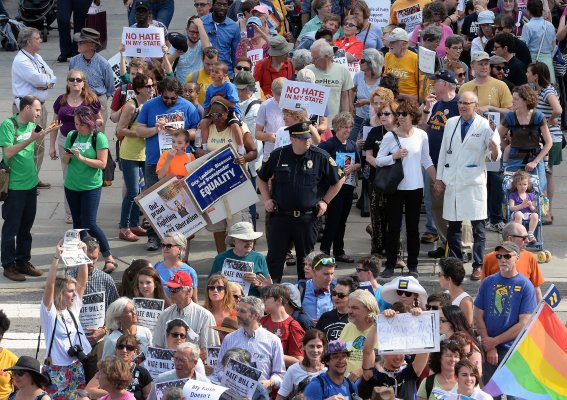 Transgender Activists Will Air This Ad During the Republican National Convention
Next Up: Editor's Pick