Political Correctness Is An Absolute Must

Donald Trump, holding a photo of himself beside, as he might say, a "dog."
Sara D. Davis—Getty Images
Ideas
By Mark Hannah

Hannah is the author of the new book The Best “Worst President”—What the Right Gets Wrong About Barack Obama.

The Republican Convention has barely begun, and the party has already made clear its primary political foe. Of course potshots will be taken at the “mainstream media,” liberals and Hillary Clinton. But what did several of last night’s convention speakers—from Duck Dynasty‘s Willie Robertson to Real World‘s Sean Duffy—regard as the real enemy? Political correctness.

You might have heard: America is plagued by “political correctness run amok.” We were told this by Donald Trump’s former campaign manager, Corey Lewandowski, when he tried to defend his old boss for tweeting an anti-Semitic Internet meme depicting a Star of David atop a pile of cash. The origins of that meme were recently discovered to be a message board of neo-Nazis and white supremacists who presumably agree with Lewandowski. After all, they titled their message board, “Politically Incorrect.”

We were told by Republicans, after the hideous, hate-fueled mass shooting by an ISIS-idolizing lunatic in Orlando, easy access to guns was not even partly to blame. Then what was? Political correctness! According to the logic of a top NRA official, who was widely parroted by Republican lawmakers, “the Obama administration’s political correctness prevented anything from being done” about the shooter’s racist ramblings.

When the elephant ate its own tail, and members of his own party panned Trump for exploiting the tragedy with offensive and egomaniacal tweets, we were told the criticism was misplaced. The real culprit? “We can’t afford to be politically correct anymore,” said Trump.

Political correctness has been a whipping boy of the right wing for decades, and lately Trump is cracking the whip with abandon. He recently told a group of evangelical leaders that they shouldn’t pray for President Obama because “We can’t be… politically correct and say we pray for all of our leaders, because all of your leaders are selling Christianity down the tubes.” (Never mind that Trump places prayer within the scope of self-interested transactions.) Remember his response to Fox host Megyn Kelly when she asked him about his temperament after calling some women “dogs” and “fat pigs”? It was: “I think the big problem this country has is being politically correct.” After being skewered by all sides for racist comments about a federal judge? “We have to stop being so politically correct in this country.”

If you’re like many Americans, you might have been persuaded political correctness is one of our country’s primary problems. Trump badly wants you to believe this, but you’d be wrong to do so. Trump is effectively positioning himself as the anti-PC candidate. Whereas Hillary Clinton thinks and speaks in the strategic—and sometimes subtle—language of diplomacy, Trump explicitly proposes himself as undiplomatic and politically incorrect. In doing so, he is cheapening and polarizing our political debates and, more important, he is making our country less safe.

This is not the first time our political discourse has been crass. When he traveled to the United States fifty years after the nation gained its independence, the French writer Alexis de Tocqueville noticed a “vulgar turn of mind” among American journalists. Journalists back in France often wrote in “an eloquent and lofty manner” but, according to Tocqueville, the typical American journalist made an “open and coarse appeal to the passions of the populace; and he habitually abandons the principles of political science to assail the characters of individuals.” Sound familiar? This vulgarity might have been characteristic of that era’s journalists, who brazenly competed for readers and hadn’t yet developed common standards of professionalism and ethics. But it wasn’t characteristic of the types of Americans who sought the nation’s highest political office.

Trump’s vulgarity is so vivid, in part, because it contrasts so starkly with Barack Obama’s civility and cool-headedness. I predict that the more Trump debases our political climate with his brand of political incorrectness, the more we will come to appreciate the qualities our president embodies. Regular Obama critic David Brooks recently praised the president for his “ethos of integrity, humanity, good manners and elegance.” Yet when the president challenges us to “disagree without being disagreeable” and to be careful not to conflate an entire religion with the hateful ideology that seeks to exploit and debase that religion, we watch as his detractors accuse him of political correctness.

You probably heard the accusations: Obama is pussyfooting around the phrase “radical Islam” because he’d rather protect the feelings of terrorists rather than the lives of Americans. Or something like that. On one hand, the intense scrutiny on the president’s language reveals a conspicuous lack of substantive criticism of the president’s foreign policy. As President Obama wondered aloud in a recent press conference, “What exactly would using this label accomplish? Would it make ISIL less committed to killing more Americans? Would it bring in more allies? Is there a military strategy that is served by this?” Of course not. It is, as the president said, a “distraction… a political talking point, not a strategy.”

But on the other hand, we are wise to focus on the language used in the critically important issue of knowing who our enemies are… and who they are not. This is an issue that has the greatest political consequences. It is a political issue on which we need to be correct. And yet in that press conference, the president himself dismissed “political correctness,” underscoring the concept’s status as a universal pariah, even as he defended his terminology. Obama explained, “the reason that I am careful about how I describe this threat has nothing to do with political correctness and everything to do with defeating extremism.”

Just as no serious firefighter would actually fight fire with fire, we can’t fight the extremist language of foreign adversaries (and the insecurity and simplemindedness that propel it) with our own extremist language, insecurity and simplemindedness. It would be geopolitically incorrect, if you will, to do so. It would alienate our allies and motivate our adversaries.

After all, as conservative foreign policy expert Eli Lake has pointed out, our biggest allies in the Middle East are people in countries, such as Egypt and Saudi Arabia, whose brand of Islam strikes American sensibilities as “radical.” After special forces raided his compound, Osama bin Laden’s notebooks revealed that al Qaeda recruiting activities were disabled because, according to Bin Laden, Obama administration officials “have largely stopped using the phrase ‘the war on terror’ in the context of not wanting to provoke Muslims.” Nothing would help ISIL’s recruiting strategy more than an American president lumping together—rather than drawing a distinction between—terrorists and the world’s billion and a half Muslims.

Conservatives might tell us Obama is “politically correct” and Trump “tells it like it is.” But when it comes to the debate over the phrase “radical Islam,” Obama is playing chess and Trump is playing dodge ball. If politics is about strategy, political correctness is arming oneself with a sound strategy while political incorrectness is strategic recklessness.

Many on the left think conservatives demonize political correctness because they resent having to suppress their own prejudices. That might be true for some. But as someone who teaches a college class on political rhetoric, I’ve come to appreciate that anti-PC attitudes are part of a longer tradition of suspicion toward carefully calibrated language. Throughout history, our species has tended to distrust people who have a knack for political oratory. Part of this stems from the fact that most people are not good public speakers at the same time most people have an affinity for people who are like them. This is something psychologists call “homophily,” and is the reason so many of us tend to want to vote for somebody we’d “like to have a beer with” rather than someone smarter than us.

Conservative politicians who criticize Obama and “political correctness” understand that eloquence is often perceived less as a mark of intelligence and personal style and more as a product of artifice and self-indulgence. This is why they can muster up the backhanded compliment that Obama is a “good speaker” or a “gifted orator.”

Why do we hate political correctness so much? Our suspicion of sensitive political language goes back to ancient Greece, when the sophists got a bad rap for going around Athens training wealthy kids to become more talented speakers so they could win votes or dodge prison time. Plato famously distrusted rhetoric, although his student Aristotle would rehabilitate its reputation as an essentially virtuous endeavor. Political correctness, in which public officials are careful to avoid language that alienates or offends, requires a certain type of expressive competence. In the 2016 presidential campaign, Trump has critiqued this expressive competence while being wholly unequipped with it.

But political correctness is a longstanding American tradition and a deeply rooted value. Our country’s founders placed a premium on the ability to persuasively articulate opposing viewpoints. They rejected government censorship precisely because they trusted individuals could and would regulate themselves in our proverbial “free marketplace of ideas.” They didn’t prohibit offensive speech because they believed truth lost its vigor unless confronted with falsehoods, and tolerance lost its social acceptance unless it could stand in contrast with ugly prejudices. They knew the value of an idea laid in its ability to gain favor in debates, which should be, in Supreme Court Justice William Brennan’s words, “uninhibited, robust, and wide-open.” Trump can say what he will about Muslims and Mexicans, but thoughtful journalists and pundits can and should say what they will about Trump.

If you are one of the many Americans who think political correctness is a detriment to politically vibrant debates in this country, you have it all backwards: People who use politically correct language aren’t trying to stifle insensitive speech. They’re simply trying to out-compete that speech in a free and open exchange.

Every time Trump says something that’s ugly or false and then claims political correctness is “the big problem this country has” and something we “can’t afford,” he’s basically blaming this free marketplace itself. He’s petulantly arguing with the umpire. He’s blaming you and me—the public—for exercising the freedom to decide which ideas are good or bad. In the end, many of you don’t like or want what he’s peddling. You reject his racist tirades and narcissistic antics. You support common-sense gun legislation which would help prevent another terrorist hate crime like the one that occurred in Orlando. You reject praying for political leaders based on those leaders’ party affiliations. And you don’t think women deserve to be compared to “pigs” or “dogs” by people seeking our country’s highest office. I happen to think you’re correct, politically.

Mark Hannah was a staffer on the John Kerry and Barack Obama presidential campaigns and is the author of the new book The Best “Worst President”—What the Right Gets Wrong About Barack Obama. He teaches at NYU and The New School. 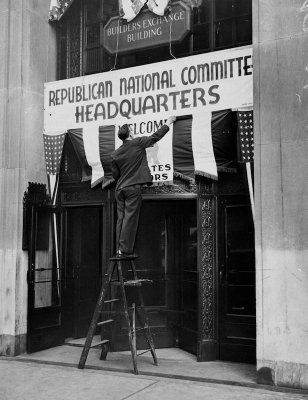 What Happened the Last Time the Republican Party Convened in Cleveland
Next Up: Editor's Pick