Presumptive Republican nominee Donald Trump recently welcomed TIME’s cameras into his office at Trump Tower. There he played the doting grandfather while posing with his eighth grandchild— 3-month-old Theodore James—during a photoshoot for TIME’s July 25 issue, kissing the now 3-month-old boy on the cheek while glancing up at the camera. The moment was captured by Harry Benson, an award-winning Scottish photographer who has chronicled Trump for nearly 40 years.

Theodore is the third child for 34-year-old Ivanka Trump and her husband Jared Kushner, who have both been close advisers to Donald and regular fixtures on the campaign trail. In fact, in the weeks leading up to his grandson’s March 27 birth, the GOP frontrunner was prone to commenting on his daughter’s pregnancy, notably mentioning the impending arrival of a “beautiful, Jewish baby” during a speech at the American Israel Public Affairs Conference.

The last time we visited the candidate at his Trump Tower office, he had a slightly different visitor. 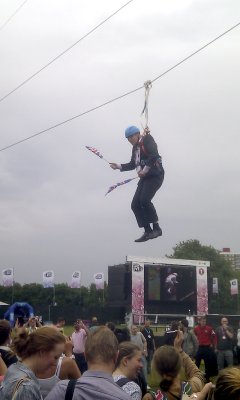