A demonstrator protesting the shooting death of Alton Sterling is detained by law enforcement near the headquarters of the Baton Rouge Police Department in Baton Rouge, La., on July 9, 2016
Jonathan Bachman—Reuters
By Olivier Laurent

Jonathan Bachman was up until 3am on July 9. After an entire day spent documenting protests in the heart of Baton Rouge, the New Jersey-born freelance photographer was filing his work to Reuters, unbeknownst to him that one of his photographs would, hours later, be hailed as iconic.

“I had gone to bed and when I woke up and went right back to Baton Rouge,” he says. Not even when the BBC sent him an email with questions did he understand that his photograph was going viral. Then, his father called. “He said, ‘John, your photo is all over the Internet.’”

The photograph shows a demonstrator, later identified as Ieshia Evans, facing two police officers in riot gear as she’s about to be arrested. Evans looks resolute, standing peacefully in the middle of the road near the headquarters of the Baton Rouge police department. The contrast between her body language and those of the approaching police officers is made even more powerful by the flowing black-and-white dress she’s wearing.

Bachman knew he had the shot, and that it would be a good one. “I knew it was a representation of what was happening in Baton Rouge at that moment,” he says. “But I really, honestly, never thought it was going to be something like this. I had no idea I would be talking to everyone these past few days.”

Since he’s photographed Evans, Bachman has been inundated with emails and calls – some coming from photographers he’s looked up to, he says. “It’s a very humbling experience. It’s a little surreal as well.”

But Bachman is not under any illusion. The photograph might have propelled his name on the global stage – “I’m a freelancer,” he says, “so I just wait for the phone calls,” — but Ieshia Evans should be the one getting the credit, he says. “People have been trying to talk about me, but really it’s that woman that made the photo.” 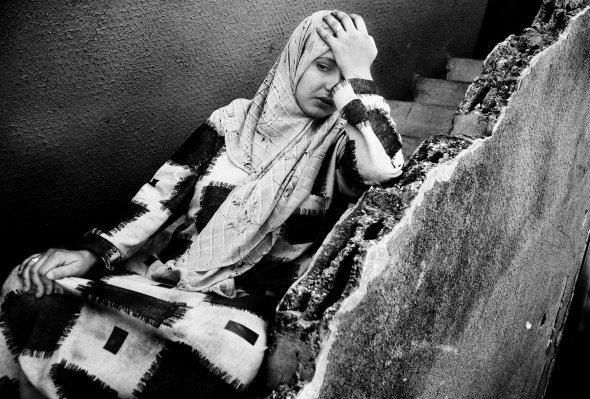 10 Years After the Lebanon War: The Photos That Moved Them Most
Next Up: Editor's Pick