Black Lives Matter Organizers Tell How You Can Help

Two organizers in the New York City division of Black Lives Matter, Autumn Marie and Nakisha Lewis, spoke with TIME and ESSENCE on Facebook Live Tuesday about the recent police killings of black men Delrawn Small, Alton Sterling and Philando Castile. They talked about how to cope during the days after the three deaths, how to respond to the counter-refrain of “All Lives Matter,” and how the effects of unfair deaths can ripple out and change how black children see their self-worth. Three main ideas emerged from the discussion:

1. The first reaction should be one of healing.

I think first and foremost is to allow yourself to be. To actually acknowledge that you are a human being, you are a human spirit, and you are connected to other people. And so when pain is literally oozing through the cracks in our concrete, you are going to feel that.

It’s my hope that employers, teachers, folks who are really engaging with people and have the ability to hold space, are allowing folks to be able to emote—whatever that looks like. And folks who are able to continue to create spaces for people to be able show up and express themselves talk about what they’re feeling. If it’s sleep that you need, then get the rest.

MARIE: There’s the waking up and existing and actually living and going on personally that sometimes can feel like too much. But then on another level there’s also the fact that a lot of people have to go into workplaces and jobs where they’re facing the same sentiment or the same type of people that are hurting us in what we see in the news or that are replicating or perpetuating that, either in the way that we are not acknowledged or in the hurtful ways that we’re acknowledged at work.

When mass shootings happen, whether they are in Sandy Hook or in Orlando or in other tragedies such as Dallas, the workplace is talking about it, and there’s a place for that. But when tragedies happen in the black community and with police murders, there’s no talk about it at work. And so what happens is black people go to work, and they’re feeling this, and they’re not in a space necessarily where it’s welcome to talk about it. But not only that, but your boss is then like: “Hey, what about these deliverables? What about this?” And you’re being hit with that, and there’s no room to say: “Hey, how are you?” But when these other tragedies happen, there’s space at work where people say: “Oh my gosh, how are you today?”

And so, even just realizing that, and that people are going through that, there are no counselors brought in. When things happen at schools at mass shootings, there’s a day of counseling. And I really look for the day when society can move toward that and be able to offer that in the workplace as well. On Friday, I had to take time. I took real time to unplug for as long as I could or to partially unplug and just cry.

2. “All Lives Matter” is the wrong approach.

MARIE: All lives will matter when black lives matter. It’s interesting: whenever women assert ourselves, that we matter or we rock, or we assert that black people matter or any other group that is against the status quo of white male heterosexual patriarchy, the first thing we hear is: “This is wrong. This is racist.” or “This is against this.” No. The standard is against us. Which is why we have to say it. There are clear facts. There are clear numbers.

When we look at the court systems both from the standing laws as well as the prosecution and lack of accountability around black murders in this country, and the process that tell us that black lives do not matter, according to the system that is set up and the institutions that are set up and the legislation that is set up, the fact that that is a threat [to which] people need to respond, it clearly brings up for us, and it clearly illustrates those people who actually do have issues with their own internal white supremacy and their own white privilege, because that’s what’s really speaking. And it’s the fear that this is going to threaten your white privilege for black people to actually matter.

LEWIS: As a queer woman of color, as a queer black person in this country, I have looked at all these different struggles for humanity, right? For the people who live at the intersection of multiple oppressed identities. And so the first thing that came to mind for me when I first started getting hit with this All Lives Matter versus Black Lives Matter conversation was: “Hm, wasn’t it just a few years ago that queer people were fighting for marriage equality?” And so many straight folks were like: “This is an attack on marriage.” “This is queer folks trying to shift how we understand marriage and therefore dismantle the sacredness of this institution.”

We, as an American people, got very clear that that was their own hatred speaking. They were feeling as if there was a threat to their humanity. When in actuality, someone getting married to someone of the same gender does not in any way impact your union. I promise you. Their union does not impact their union. And so in that same manner, I would really love for people to pause for a second and think: “Does it really mean that my life doesn’t matter if I am not a black person because black people are getting that they matter and are speaking that?”

Because affirmations matter. Just like human lives matter, affirmations matter. Affirmations matter not only to those of us who are adults and can really understand the nuance and the history on which this work builds, but also for our children. I think about the young people who growing up in this time—so this 4-year-old who just witnessed one of the adults in her life be murdered probably does have real questions about her mattering, probably does have real questions about the mattering of the people in her family when her mom sat there in handcuffs after doing nothing wrong. Even if she can’t even process what has fully occurred here, there’s something that means: we’re a little bit different than these other folks.

I want our children to be very clear. I want our communities to be very clear. And I want us to be reminded if at any point in the conversation, we’ve lost stake in who we are as a people, then allow this to be a moment for us where we get that we matter, and those that may not ever have been in the same place with us or who themselves have forgotten that black people are indeed human beings and worthy of dignity and respect, that they, too, get to be reminded.

3. We must create a positive example for children.

MARIE: Every time a black person is killed and nothing is done about it or there are no repercussions, rather, that come out of it, or whenever children are witnessing this in their family as well and just seeing that trauma, they are being told: “Black lives do not matter.” You have to realize that in the same way that we talk about all the other things with our children in terms of internalizing these things and taking them on—they take on what they see in the media, they take on what they see.

When you see numbers going up in Chicago, look at what’s going on in that same year with black people getting murdered. If we live in a society that reaffirms our life, reaffirms our dignity, it is that much easier for our children to reaffirm that and look at each other differently. But if you’re constantly telling them by your laws, by your actions, by your lack of accountability, by the disparity in resources and love that they see in their community and things that are given to their community and provided there by the disparities in education, then you’re constantly sending them a message. They are not only internalizing that but also reflecting that back to the black people around them. 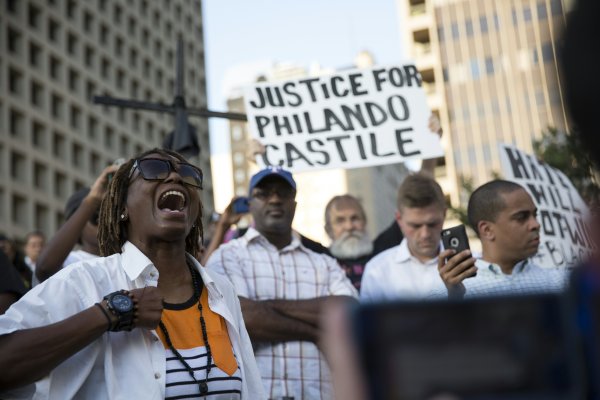 We Need Justice for Sterling, Castile and the Dallas Police
Next Up: Editor's Pick