Each of the three potential running mates brings different advantages—and baggage—to the presumptive Republican nominee’s campaign. The final pick will show a lot about how Trump thinks he can win in November.

Unlike some other Trump campaign decisions, the vice presidential pick is also pretty final. He’ll have to live with his running mate through November, and, if he wins, through a four-year term in office.

Here’s a look at the three men considered to still be in the running.

Take the Poll: Who Should Trump Pick as His Running Mate?

Why he’s a good pick: Christie’s personality matches Trump’s own—made for TV and big rallies over the nuts-and-bolts of a traditional campaign. Trump plans to use the media to offset on-the-ground campaigning, and Christie knows that game well. Christie also continues the narrative of being a Washington outsider. Christie is the only vice presidential candidate in the final three that has no Washington experience.

What he’s known for: Combativeness. Before Trump came along, Christie’s viral YouTube videos in which he challenged voters he saw as misguided set the mark for audacity, and his takedown of Florida Sen. Marco Rubio at a primary debate drew blood. Christie’s star has been tarnished by a lingering scandal and low-approval ratings at home, especially since he endorsed Trump.

What’s in it for Christie: A job. Because of term limits, Christie can’t seek a third term as governor in 2017, while his low ratings would make other elected positions an uphill climb in New Jersey. Having failed in his own presidential campaign, Christie is looking for another job. Serving as vice president or attorney general—a job he might prefer—in a Trump Administration could be that ticket.

What it would mean for Trump: Christie would be a classic vice presidential pick in that he offsets the top-of-the-ticket’s weakness, the way longtime Sen. Joe Biden supplemented Barack Obama’s foreign policy heft. He knows the issues and how to campaign. His experience as governor and in politics adds to Trump’s lack in those departments.

Why he’s a good pick: He’d reassure conservatives. After serving in the U.S. House of Representatives for more than a decade, leading the conservative Republican Study Committee, and one term as governor of Indiana, Pence has a record, unlike Trump, who has never held office. In 2010, he even won a straw poll as the presidential pick for the conservative Values Voter Summit.

What he’s known for: His conservatism. Last year, Pence put Indiana in the spotlight by signing a law that would allow businesses to deny service to gay people for religious reasons, a law that led to backlash from the business and LGBT communities, and he also supported a law that added abortion restrictions in the state. He initially endorsed Texas Sen. Ted Cruz.

What’s in it for Pence: A national profile. Pence faces a contentious re-election campaign (which he must decide on by Friday). Running for vice president instead could give him a graceful exit while also raising his national profile. Even if Trump loses in November, that could be a ticket to a future race. Just ask Franklin Roosevelt, who bounced back from a loss in 1920.

What it would mean for Trump: He’s trying to calm Republicans. Pence is known for being unflappable to the point of being a little unexciting, plus he has executive experience and spent time inside the Beltway. Picking him would be a sign that Trump feels the need to balance the ticket and reassure Republicans that he’ll govern as a conservative.

Why he’s a good pick: He’s the most like Trump. Though he was a key architect of the Republican revolution of 1994, Gingrich also cut deals with President Bill Clinton on things like welfare reform. He’s known for speaking off the cuff and occasionally throwing out ideas, such as a moon colony, that most politicians would consider too far out there. Plus, he’s long been big on Twitter.

What he’s known for: Being Newt Gingrich. Like Trump, Gingrich is a man in full: He cut an ad in 2008 with Nancy Pelosi about climate change, which he later disowned; he’s written books, including historical fiction; and he’s done consulting, produced movies and ran for president in 2012. He’s long been a regular on cable news shows as a pundit and commentator.

What’s in it for Gingrich: He’s got nothing to lose. Unlike a lot of other potential picks, Gingrich has long been out of politics. A vice presidential run would increase his public profile, add to his Twitter followers and introduce him to a new generation of conservatives. Whether he ends up in 2017 as vice president or goes back to doing what he’s been doing, there’s little downside for him.

What it would mean for Trump: He’s following his heart. Trump said long ago that he wanted a vice president who could help him negotiate with Congress and who knew the Beltway ropes. He’s also clearly comfortable with Gingrich’s approach to social media, cable news and public policy. 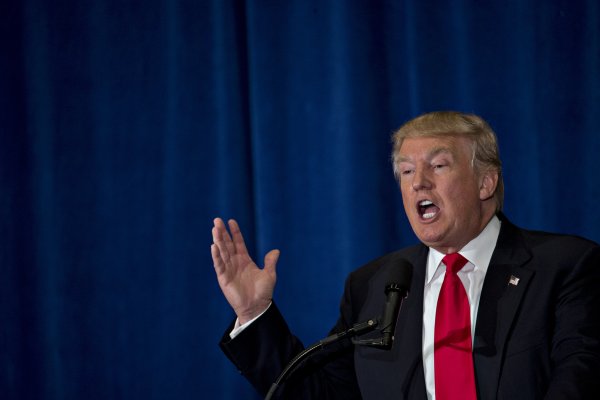 Donald Trump Warns That U.S. Is Divided
Next Up: Editor's Pick