An Entrepreneurial President in the Age of Extremism

U.S. President Barack Obama arrives to speak to the media at the conclusion of the Warsaw NATO Summit in Warsaw, on July 9, 2016.
Sean Gallup—Getty Images
Ideas
By Brett Bruen
Bruen was Director of Global Engagement in the Obama White House and is now President of the Global Situation Room, Inc., an international consulting firm.

Entrepreneurship will ultimately erode much of the energy fueling ISIS. Just like American music penetrated through the Iron Curtain, so, too, shall innovation steadily infiltrate the ranks of extremism and those who would provide it sanctuary. As in the Cold War, this invisible influence does not work in isolation. It reaches where our weapons cannot. It embeds itself where repressive ideologies took root and slowly shows how to replace fear with hope. When historians look back at what sapped support from our adversaries, President Obama’s work to push the frontiers of entrepreneurship around the world will be credited as a principal accelerator of their demise.

There can be two interpretations of the impact President Obama’s famous 2009 speech in Cairo had on America’s relationship with the Muslim world. One version characterizes it as a case of unfulfilled expectations. Where were the large government programs to match his ambitious rhetoric? Yet huge expenditures on foreign initiatives were never going to be possible in the midst of one of our nation’s worst economic recessions. Indeed, the real aim and power of the speech and the programs built to advance its vision was they were not dependent on large American expenditures. Instead, they were designed to lay a foundation on which our allies and partners could construct their own entrepreneurial efforts. In the end, these are far more relevant and sustainable than a flashy contract from the U.S. government.

Based on my work at the White House, I believe that the American government’s real power when it came to entrepreneurship was to concentrate others’ attention on a challenge, convene actors to address it and champion their work. The initiative President Obama announced on my last day, Spark Global Entrepreneurship, embodied that vision. It was a call to action to focus resources on emerging entrepreneurs, especially women and youth. Within two months it had generated over $1 billion dollars in commitments from the private sector, far eclipsing what the government could do.

The Global Entrepreneurship Summit, which President Obama just headlined in Silicon Valley, similarly illustrates this potential. For seven years it was hosted by governments around the globe, mostly in the Muslim world. At first glance it may appear little more than a superficial show. Yet examining the entrepreneurial ecosystem in countries like Malaysia and Morocco before and after the event reveals a far different picture. One young man wrote that prior to the summit in Marrakech, entrepreneurs in the country were considered an embarrassment to their families. After being celebrated by the nation’s rulers and business leaders from across the world, starting a business there has become “cool,” according to Entrepreneur Magazine. The numbers of startups in the country have swelled, perhaps a contributing factor to why ISIS has struggled to gain a foothold there.

These are not line items on a budget that we can point to and say: “Look at how much we spent!” The summits, the speeches, the advocacy for governments to make their laws more business-friendly don’t require large expenditures. They involve persuading, partnering and promoting. The results don’t include an American flag on the door of every startup we supported or inspired. But you talk to the entrepreneurs inside or those leading the movement globally, and they’ll tell you when it changed for them.

President Obama chose to make entrepreneurship a central part of how his administration engages the world. In so doing, he helped millions do more than wait for American aid. He showed them how their destiny didn’t depend on our government or theirs. That it was limited only by the distance they were willing to go to achieve their goals. That is an ideology that will prove more powerful than extremism. 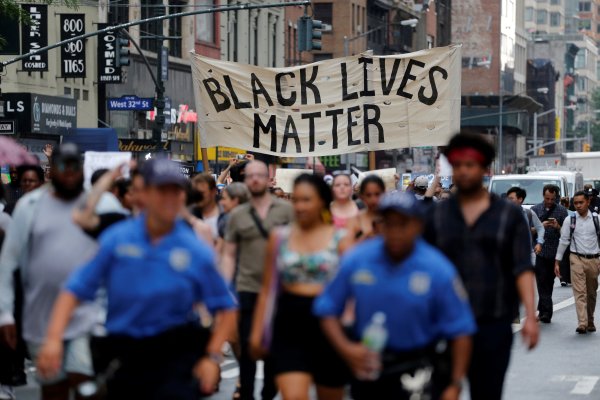 Enough Already With 'All Lives Matter'
Next Up: Editor's Pick