Legislators in Vermont and Iowa have restarted contentious campaigns to consolidate their rural school districts, arguing that districts serving hundreds (or in some cases, dozens) of children are unable to offer comprehensive or affordable programs of study.

Struggles over school consolidation have simmered in both states for a century. In 1914, the Carnegie Corporation published an influential study calling for the reorganization of Vermont’s 268 school districts—most of which operated a single, one-room schoolhouse—into supervisory unions administered by professional superintendents, which officials hoped would pave the way for further consolidation. The measure encountered strong opposition from voters, who valued small schools and traditions of community oversight. The requirement for supervisory unions was implemented, removed, and revised at least three times between the 1920s and the 1960s. Vermont still operated 506 one-room schools in 1950, and its 268 districts remain in place to the present.

The Brookings Institution issued a similar report in Iowa in 1933, observing that “localism has apparently run riot … in the case of one-room schools. The consequences are [the] exceedingly wasteful use of buildings and teaching positions.” Yet Iowa still operated 4,100 one-room schools in 1950. State-mandated consolidation closed most of them by 1965, diminishing the number of districts from a peak of almost 4,500 to 351 today. But, as in Vermont, the state remains at an impasse with its rural communities: superintendents and teachers’ unions contend that existing districts are still too small, while voters remain bitter about the loss of local control and hometown schools. Questions persist about the costs and benefits of small schools, equal educational opportunity, and participatory democracy.

The most notable change in recent consolidation fights has been the silence of suburban voters. During the 1970s, suburbs repeatedly championed rural districts’ right to operate independently from professional and state regulation. They did so at least in part to safeguard their own interests. Courts began to scrutinize suburban schools in the decades after Brown v. Board of Education (1954), finding that local control perpetuated profound racial and economic disparities between communities. Citing the state’s authority to close one-room schools, federal courts sanctioned plans for inter-district busing and revenue sharing, raising the prospect of the forced consolidation of urban and suburban districts. Ultimately, however, the Supreme Court reversed those decisions. In San Antonio v. Rodriguez (1973) and Milliken v. Bradley (1974), the court also cited the history of one-room schoolhouses, this time to establish new rights of school district autonomy. “School district lines may not be casually ignored or treated as a mere administrative convenience,” wrote Chief Justice Warren Burger. “Substantial local control of public education in this country is a deeply rooted tradition.” Since then, the result has been inviolable school district boundaries, sharply segregating students by race and class, sustaining suburban privilege in the name of local control.

Rural districts have not fared as well as the suburbs. The combination of depopulation, differential taxation of farmland, and inauspicious funding formulas has left many with strained budgets and rising fixed costs. It remains difficult for them to recruit quality teachers and a large portion of their students live below the poverty line. In each of these regards, the interests of rural and suburban communities have diverged since the 1970s. Rural communities remain committed to ideals of community control but struggle to afford its costs, while suburbs seem to value community in terms of competitive advantage (home values, college admissions, etc.) rather than democratic involvement.

These facts do not invalidate the virtues of local democracy, to which many Americans retain an honorable commitment. Nor, on the other hand, should we romanticize voters in rural school districts, who remain divided on questions of cost and educational adequacy. But we should all take notice when small schools come under threat, if only because they offer such a clear choice between equity and community, conflicting imperatives in our democratic society. As voters in Vermont and Iowa deliberate, the rest of the nation should recognize, first, how the legacy of rural education has cemented unacceptable disparities between cities and suburbs, but also how that legacy provides a vital resource—a usable past—for those committed to participatory government going forward.

Campbell F. Scribner is an assistant professor of education at the University of Maryland and the author of The Fight for Local Control: Schools, Suburbs, and American Democracy. 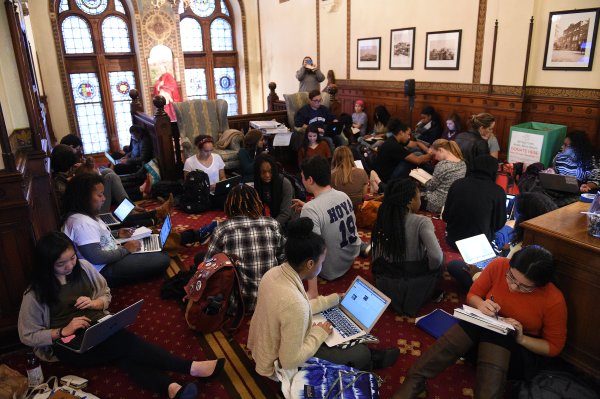 Georgetown University Aims to Make Amends for 1838 Slave Sale
Next Up: Editor's Pick