Donald Trump explained his plan to reform the Department of Veterans Affairs Monday, defending the country’s veterans as well as its police in the wake of the shooting in Dallas that killed five police officers.

“I am the law-and-order candidate,” Trump said emphatically in Virginia Beach, using a slogan that propelled Richard Nixon to the presidency during the 1968 campaign.

“The men and women who have served in our armed forces represent the very best of America,” he continued. “Now is the time to follow their example of public service, unity and selfless devotion to our nation.”

Trump’s 10-point plan hinges on giving veterans the choice for care at either a VA hospital or at a private health care facility, with care at both funded by the government. He said this includes mental health care, for which he wants to increase outreach and the number of facilities and professionals available.

He also focused on improving accountability in the system to decrease waste and wait times, by offering bonuses to employees who save money and as making sure the director has the authority to fire bad employees.

“Fixing this corruption will be one of my many and really highest priorities,” Trump said. “And believe me, it will happen, I’m really good at things like that.”

He also said he would establish a 24-hour hotline to the White House where people could call in complaints about the VA and be connected to a real person, possibly even Trump himself. “I will fix it myself if I have to,” Trump said.

Throughout the speech, Trump hammered presumptive Democratic nominee Hillary Clinton as part of the problem.

“She’s been part of this rigged system for a long time,” Trump said. “Perhaps it’s easy for politicians to lose touch with reality when they’re being paid millions of dollars to read speeches on teleprompters to Wall Street executives, instead of spending time with real people in real pain.” 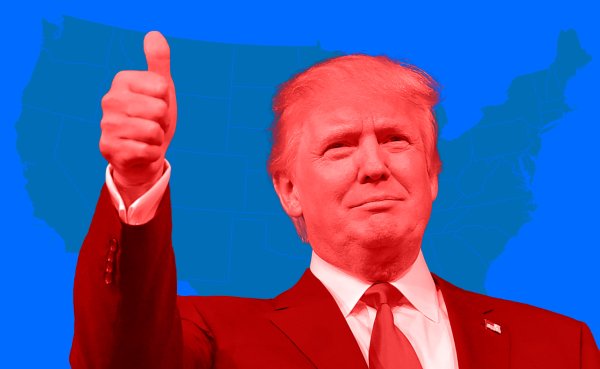 Trump Talks About Winning Blue States, But Little Proof So Far
Next Up: Editor's Pick