He also updated the number of officers who engaged with the suspect to 11 officers who fired on him plus two officers who rigged the explosive device to the robot that eventually blew Johnson up. Johnson said the decision to use the robot was made very quickly, within 15 to 20 minutes.

“He’d already killed us. He was telling us how many more he wanted to kill. I’d do it again,” Brown told reporters at Dallas police headquarters. “I’d use any tool necessary to save officers lives.”

The robot used was a Remotech Andros Mark V-A1, purchased by the DPD in 2008 for $51,000. An extension arm was damaged by the explosion, but it otherwise remains functional.

Read More: When Can Police Use a ‘Bomb Robot’ to Kill a Suspect?

Brown said the Johnson family was cooperating with authorities and that he was particularly concerned with the amount of explosives found inside Johnson’s home. “He knew what he was doing. On the laptop, the evidence collected, there are questions on how he learned that—he didn’t learn it in the military,” Johnson said.

Johnson said Dallas police were working with the FBI to decipher the bloody initials “RB” that Johnson drew on the wall of the parking lot before he died.

Brown said police are still sorting through 170 hours of body camera footage as they try to piece together a timeline of the attack. They expect to release a timeline in the coming days.

Downtown Dallas traffic was snarled Monday morning as commuters tried to navigate around a 25-square block crime scene that police anticipate will remain closed until at least Wednesday.

Overall, Brown emphasized that Dallas has “the best police department in the nation,” noting that 2015 say the 12th consecutive year of crime reduction, to a 50-year-low level of crime. He particularly noted that the department’s community policing effort had helped reduce excessive force complaints against police by 67 percent.

When asked what young black men can do to overcome their fear of cops, Brown told them to become cops. “Get out of that protest line,” he said. “We’re hiring… We’ll help you solve some of the problems you’ve been protesting about.”

Brown said it would be the last time he anticipates speaking to the press for several days as the police force as a whole turns to burying their dead and mourning as a community. 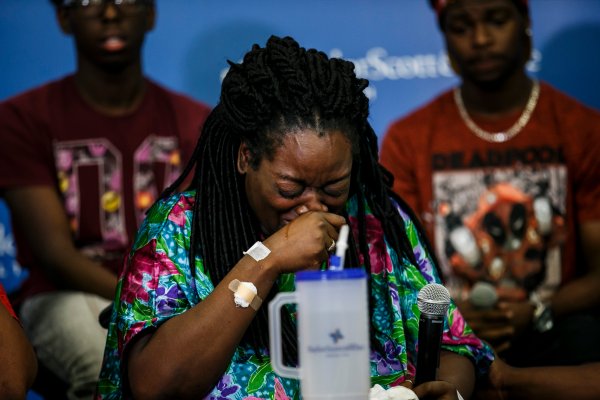 Mother Shot By Dallas Shooter Describes Her Battle to Save Her Sons
Next Up: Editor's Pick