Jan Rose Kasmir confronts the American National Guard outside the Pentagon during the 1967 anti-Vietnam march. This march helped to turn public opinion against the U.S. war in Vietnam.
Marc Riboud—Magnum Photos
By Lily Rothman

In the wake of days of protest across the United States, one image has captured America’s attention: a photograph from Baton Rouge, La., of a serene-looking female protester standing opposite police officers in riot gear. The photographer, Jonathan Bachman, told BuzzFeed that he knew right away that it would be “an important photo.”

The woman was later identified as Ieshia Evans, who wrote on Facebook that, while she appreciates the well-wishes she has received since the photo went viral, she considered herself a mere “vessel” for God’s work.

That’s a feeling that Jan Rose Kasmir can appreciate: “the universe using me for my picture,” as she put it on Monday. She was a Washington-area 17-year-old when photographer Marc Riboud snapped a picture of her holding a flower in the face of bayonets during a 1967 protest against the Vietnam War. A similar image of another person using “flower power” against the military police (seen at left) ran in TIME that week.

Like the more recent image of the protester and the police, the 1967 image of Kasmir juxtaposes one serene woman against the full, nameless force of authority. As put by a 1999 special edition of LIFE about the great photos of the 20th century, the image became “an enduring icon of the antiwar movement.”

“You just can’t get confused about being the object of attention and what your life’s about,” Kasmir, now a 66-year-old massage therapist in Hilton Head Island, S.C., tells TIME when asked if she had any advice for the woman in Baton Rouge. “You can take it as a sign that what you do counts, but that fleeting bit of attention — let me tell you, when I first started getting attention and then I was dropped on my head back to my normal life, it was painful.”

That attention came decades after the picture was taken, as it took years for Kasmir — in the pre-Internet years — to even discover that she was the subject of a famous photo. “I gave up a lot for what I believed in,” she says, “and for me [the photo’s fame] was karmic payback.”

But, says Kasmir, if her experience is any indication, an image of calm in the storm can be more complicated than it may seem. In fact, recalling that day in 1967, she says that “serenity” is not the right word to describe what was going through her mind.

“I went through all different kinds of emotions [that day], but prior to that moment I was up against the rhetoric, the ‘war machine,’ the ‘baby killers.’ At that moment I looked into their eyes and I thought, ‘Oh my God, these are just young boys,'” the lifelong activist recalls. “If you look at my face, I’m extremely sad. They were just as much victims of the war as we were.”

Still, she understands why images that appear to capture a peak of nonviolence are likely to capture attention.

“It’s very Gandhi-esque and more enlightened than the horror that’s around it. I think that’s why people are really drawn to it,” she says. “People do resonate with peace and do resonate with goodness and hope. That’s the attraction. Everybody is completely blown away right now by what’s going on; everybody is quietly frantic. Some people have taken time out of their lives to express that energy in protest, but there’s a sense of quiet desperation in all of us.”

And even though Kasmir recalls feeling like her fame was fleeting, she still plans to make what use of it she can. With retirement on the horizon, she hopes to visit college campuses in the fall to encourage support of the people she calls the “mensches in the trenches” and speak about unity, something she feels is missing from today’s protest movements.

The takeaway for Kasmir from the recognition earned by the 1967 photo of herself, and from this weekend’s image from Baton Rouge, is a hopeful one.

“To me,” she says, “this speaks to how much more powerful peace is.” 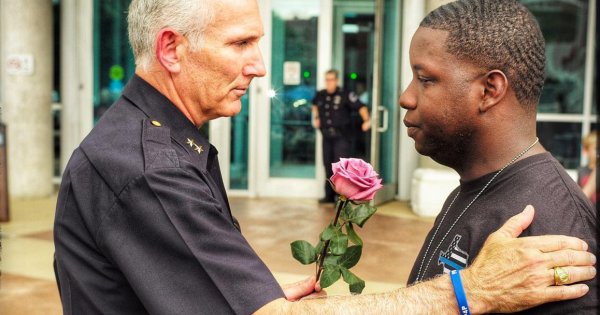 Photographer Ruddy Roye Instagrams from Dallas
Next Up: Editor's Pick