Everything You Need to Know About Angela Eagle, the Challenger for the Leadership of the U.K. Labour Party

British politics is undergoing a Medieval period of bloodletting. In the latest development, former business spokeswoman Angela Eagle announced her bid to lead the opposition Labour Party on Monday and wrest power from Jeremy Corbyn, who has lost the confidence of almost all the party’s lawmakers.

The announcement was not a surprise as senior party members have been trying to persuade Corby to resign since he lost a no confidence vote on June 28 by 174 to 40, but it was overshadowed by the simultaneous announcement of Andrea Leadsom that she was pulling out of the contest to lead the Conservative Party.

Eagle is from the “soft left” of the Labour Party, as opposed to Corbyn’s position on the far left. She is known for championing women and minority rights, and campaigning for the U.K. to remain in the E.U. Her challenge has angered supporters of Corbyn, who became leader after being backed by 60% of the party membership.

“I’m not a Blairite, I’m not a Brownite and I’m not a Corbynista. I am my own woman – a strong Labour woman,” said Eagle as she launched her campaign on Monday. The 55-year-old is one of dozens of Labour shadow cabinet ministers to resign following Britain’s vote to leave the E.U. on June 23. Eagle, and her colleagues said that Corybn was weak in advocating for the E.U. and did not have the ability to lead the party to victory in a general election. “I am not here for a Labour Party that just takes part. I’m here to win” said Eagle.

Eagle was born in the northern English town of Bridlington with her twin sister Maria who is also a Labour Member of Parliament. The Eagles’ father was a print worker and their mother was a seamstress. Both girls took up chess under the guidance of their father and both had political ambitions from the age of 6.

“I joined the [Labour] party because my mum and dad were denied in 1940s and 1950s Sheffield any chances for higher or further education because of where they came from, because they were poor,” Angela Eagle told the Huffington Post in 2015.”I just thought that was wrong, and I was able to be the first person who went to university from my family — albeit only about 10 minutes ahead of my sister — because of the work that previous Labour governments did in opening up higher education. We both went to Oxford. That is the key to what I have been able to achieve, and I want that for everybody.”

The Eagle sisters were taught “to work hard, respect others” by their parents and to always believe there was nothing they couldn’t conquer. Both girls studied Politics, Philosophy and Economics at Oxford University, a subject traditionally taken by students aiming for a career in politics.

After jobs with the party and trade unions, Eagle was elected MP for Wallasey in 1992. She went on to serve as a junior minister in the Department for Environment, Transport and the Regions in 1997 and the Department of Social Security from 1998 in the governments of Tony Blair.

In 1997, Maria Eagle was elected as MP for Garston and Halewood, making the Eagle sisters the first-ever twins in parliament and later government. The same year Angela Eagle became the first female Labour MP to come out as gay.

Eagle, who has been in a civil partnership with trade unionist Maria Exall since 2008, was sacked as a junior minister in 2002. According to the London Times, Tony Blair forgot she existed and gave her role to someone else. She resumed her ministerial career under Prime Minister Gordon Brown as Exchequer Secretary to the Treasury and later as Minister of State for Pensions.

Eagle and her sister have been described by the Guardian as politicians “more comfortable with the nuts and bolts of policy than the theatre of personality politics.” But Eagle has managed to rile the government, once prompting Prime Minister David Cameron to tell her “calm down, dear” after she challenged him over reforms to the health service.

Eagle’s leadership challenge threatens to split the party between its MPs who have no confidence in Corbyn and party members who voted for him in 2015. A member of her local party hinted that she might also face a vote no confidence from her constituency.

As the Conservatives rapidly move from chaos into stability with Wednesday’s appointment of Theresa May as Prime Minister, Eagle’s leadership bid could help calm differences in the Labour Party if she wins, or lead to a catastrophic breakup of the party if she loses. 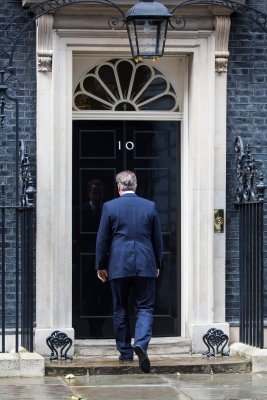 What Tune Did David Cameron Hum After Announcing He's Stepping Down?
Next Up: Editor's Pick