Paul Ryan Will Speak at GOP Convention to Urge Unity

House Speaker Paul Ryan will deliver a 10-minute address on the need for party unity at the Republican National Convention in Cleveland next week.

The speech will focus on “the need for conservatives to unite around Republican candidates in advance of a critical election,” and the differences between the GOP platform and the policies promoted by President Obama and presumptive Democratic nominee Hillary Clinton, according to Politico‘s “Playbook.”

Speaker Ryan will also tout the House Republican agenda; a roadmap Republicans can use in tough election battles, one that’s more substantive than the proposals suggested by Donald Trump.

In an interview with Politico, Ryan coyly said he was not sure if the presumptive Republican nominee will cost Republicans seats in the House of Representatives come November’s election. But the House Speaker maintained that he is focused on discussing the GOP’s ideals and solutions. “I want to talk about our ideas, our solutions and how our party should unite…around our common principles and how we apply those principles to problems,” Ryan said.

Though Ryan is a fervent critic of former Sec. of State Hillary Clinton he’s also signaled some reluctance in jumping aboard the Trump train. The Republican leader endorsed the candidate in early June. In the Politico interview, Ryan suggested working with Clinton would be difficult, calling her a “liberal progressive.” 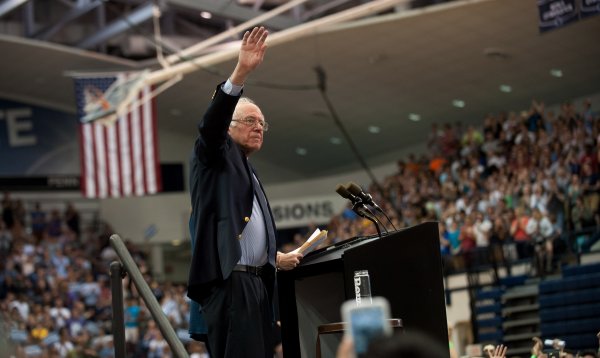 Sanders Set to Endorse Clinton at New Hampshire Rally
Next Up: Editor's Pick