Activists covered in fake blood protest against bullfighting and bull-running during a demonstration called by the People for the Ethical Treatment of Animals (PETA) and Anima Naturalis on the eve of the San Fermin festivities in the northern Spanish city of Pamplona on July 5, 2016.
Ander Gillenea—AFP/Getty Images
By Amanda Calvo

The death of a Spanish matador in the bullfighting ring last week sparked renewed calls for a ban of the bloody tradition and reopened a national debate on its place in modern day Spain.

Victor Barrio’s passing was one of several bull-related incidents in Spain over the past few weeks. A man died in a bull-run near the southeast city of Alicante and a total of 12 people were gored in the world-famous running of the bulls in Pamplona, which attracts thousands of people who participate or watch others being chased through the city’s narrow streets by raging bulls.

But Barrio’s death was significant, as he was the first matador to die in the bull-ring since 1985. The bullfight was broadcast live on TV and those who watched witnessed the 1,166-pound bull flip and gore him in the thigh and chest, the bull’s horns piercing one of his lungs and aorta.

The footage went viral, and his wife’s tweets about Barrio’s death being “unfair” and dying in “glory” unleashed a barrage of criticism on social media, aimed at the bullfighting tradition and Barrio himself. “Life was very fair. Your husband got what he deserved,” one person tweeted.

Read More: When the Running of the Bulls Was So Hectic No One Noticed That Two Men Died

Proponents of bullfighting say the practice is as Spanish as can be with its origins dating back thousands of years.

“Bullfighting is something incredibly ancestral and is an art form like poetry,” insists the president of the Association of International Bullfighting, Williams Cárdenas, to TIME. He maintains that the rejection of the tradition is due to many being unable to appreciate what he sees as its “beauty.”

In keeping with these sorts of traditional attitudes, Spain’s best selling paper El País reviews bullfights in its culture, rather than sports, section alongside other performances like theater and ballet. Every fight follows the same three part ritual starring a matador dressed in embroidered threads that hark back to imperial Spain. He swerves his cape to direct the bull in a 15-minute “dance” before plunging his sword between the bull’s shoulders, ultimately killing the animal.

The essence of the practice is a “fight between a fierce and noble animal and an intelligent and valiant human being who puts his life at risk to attain the glory of civilized values,” writes Antonio Lorca, the bullfighting critic for the paper. It’s a defense, and a kind of language, that’s typical among supporters of the bloodsport.

Yet animal rights groups maintain that bullfighting is never a fair fight.

“It is the 21st century and unthinkable that a spectacle where someone mistreats and kills an animal is officially a cultural event,” said Chesús Yuste, spokesperson for the Parliamentary Association in Defense of Animals (APDDA). “The time for bullfighting has passed.”

Read More: Thousands of Spaniards March in Support of Bullfighting

In the rare cases, like Barrio’s, when a matador is killed in the ring, Spanish tradition dictates that not only the offending bull, but its mother be put down. In the wake of Barrio’s death, Spain’s Animalist Party Against Mistreatment of Animals (PACMA) launched a campaign to save the mother from slaughter. “Don’t we have enough blood already?” ran one of the party’s tweets.

Animal rights groups say the matador rarely succeeds in killing the bull on the first try. More often than not, he is forced to use more than one sword to finish the job. As the bull’s blood spatters across the arena’s sand it may still be conscious — even while one or both of his ears and tail are cut off and awarded to the matador, depending on his performance.

About 2,000 bullfights are held yearly across Spain, and are often featured in municipal events like Pamplona’s annual bull run. But audiences for bullfights are reportedly dwindling, with 8.5% of Spaniards attending bullfights in 2011 (compared to 9.8% in 2007), and TV numbers falling to a record low, with under one million viewers, according to El País.

The industry was hit hard by Spain’s economic crisis as people preferred to spend their money elsewhere. In addition, demonstrations are now commonplace wherever a bullfight is held.

Two provinces so far, Catalonia and the Canary Islands, have outlawed bullfighting with the Balearic Islands also expected to approve a ban this summer. But it is officially part of the nation’s cultural heritage, according to a law passed in 2013, and under the Ministry of Culture, bullfighting still enjoys certain financial and legal protections. A 2013 report by Green MEPs, which investigated the subsidies given to bullfighting and bull rearing, found that €571 million ($630 million) in government funds was spent annually on the practice (although the report does note that this is an estimate as the “lines of funding are difficult to track.”)

The majority of Spaniards do take issue with the government subsidizing bullfights. A 2015 Ipsos Mori poll revealed that 73% of Spaniards do not approve of using public tax funds to subsidize the bullfighting industry. And in the past year a number of left-wing councils have slashed municipal funding across 17 cities, including in the capital Madrid, where the city’s mayor nixed a $67,000 annual subsidy for the city’s only bullfighter school.

“Without such backing, this recreational activity would probably be on the brink of financial collapse and unable to subsist,” the report concluded.

Still, none of the leaders of Spain’s four main political parties have taken a stance against bullfighting itself. As Lorca puts it, “Spain’s attitude toward bullfighting is increasingly confused and confusing.” An El País poll showed that 60% of Spaniards disliked bullfighting but more than half were against its outright prohibition.

Some point to a growing attitude of indifference towards bullfighting itself and a generational divide in consumer preferences and its associated values, according to Katarzyna Olga Beilin, author of In Search of An Alternative Biopolitics, which explores Spain’s controversial relationship to bullfighting. Simply put, young people are just not that into it, with the tradition enjoying a larger following among Spain’s over-45s.

“Bullfighting does not fit in with the environmentally conscious lifestyle seen throughout the western world,” Beilin tells TIME. “It’s not about Spanish culture anymore it’s more about entertainment, and Spaniards like to spend their money on other things that are aligned with European values now, more than ever.”

For bullfighting aficionados, the late matador Barrio may be considered a hero, but their national pastime could meet its match if a culture of indifference lets the bullfight fall of its own accord. 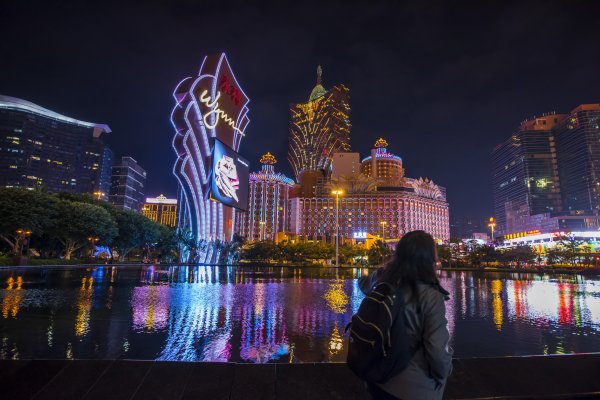 As Casino Revenues Plummet, What's Next for Tiny Macau?
Next Up: Editor's Pick