The U.S. women’s gymnastics team has a lot to prove next month when the Olympic Games start in Rio. As defending team gold medalists, there’s pressure to defend that title, and as the country that’s produced the last three all-around champions in a row, there’s tremendous expectations to make it a four-peat.

That’s very likely to happen, with three-time world champion Simone Biles now officially on the U.S. team. Biles easily won the two-day Olympic trials in San Jose, Calif., cementing her reputation as the best gymnast in the world. Biles hasn’t lost a major competition since winning the world championships in 2013. Despite an uncharacteristic fall off the beam and a small break on the uneven bars, Biles’ high-difficulty routines meant even a few deductions kept her well ahead of her 12 other competitors.

As the winner of the Olympic trials event, Biles was the only guaranteed member of the Rio-bound team. The remaining four members were chosen by a selection committee of three — national team coordinator Martha Karolyi; Tatiana Perskaia, a women’s national team coach; and Terin Humphrey, the athlete representative. The panel met for nearly half an hour after the trials were completed at the SAP Center to name the remainder of the team.

After the agonizing wait, Gabrielle Douglas, reigning Olympic all-around gold medalist from London 2012, learned that she qualified for her second Olympic trip despite coming in seventh at the trials. Her second-place finish behind Biles at last year’s world championships and her experience with Olympic-level competition, particularly on the uneven bars where the U.S. team is weak, however, made up for her trials performance. Her London teammate Aly Raisman also earned a second Olympic spot with solid finishes throughout this season.

Joining them are first-time Olympians Laurie Hernandez from Old Bridge, N.J., and Madison Kocian of Dallas. Hernandez was the surprise standout of the trials, with a memorably energetic floor routine and consistent routines on the three other events over the two-day competition, making it clear she’s ready for a shot at the Olympics.

The team is a carefully built group meant to give the U.S. the best chance of defending its team gold. Three gymnasts will compete on each of the four events, and Karolyi and the selection committee scrutinized each gymnast’s routine to figure out which combination of programs would yield the highest overall score. Biles excels at vault, floor and balance beam, as does Raisman, while Douglas and Kocian are specialists on the uneven bars, and Hernandez shines on floor.

The team now heads to Houston to the National Training Center for further training, during which Karolyi will determine the final lineup of who will compete on which event in Rio. 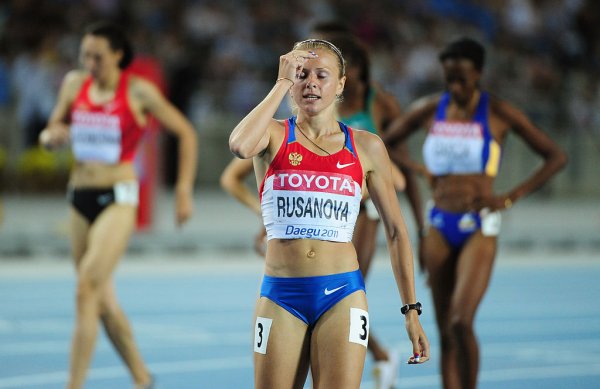