In Dallas, Police Lives Are Mourned but Rage Continues to Boil Over

People, including a man wearing a T-shirt with a Confederate flag, hug in Dallas on July 10, 2016, following a Black Lives Matter rally protesting the multiple police shootings
Carlo Allegri—Reuters
By Jay Newton-Small

Many of the speeches were eerily the same. The speakers, the thoughts, the frustration and anger — all the same. But what was different at a meeting of the Next Generation Action Network — the lead group that sponsored Thursday’s night Black Lives Matter rally in Dallas — was that five police officers had died and seven were wounded protecting many of the people in the crowd Sunday night at Friendship West Baptist Church in southern Dallas.

“I ain’t anti-police,” said Fredrick Douglass Haynes, the pastor at Friendship West. “It’s about a system that needs to be corrected.”

While most speakers expressed regret and condolences for the officers who had lost their lives or were wounded, many felt that such violence was inevitable. And while they condemned the alleged shooter Micah Johnson, they also said he was Exhibit A of the problem. “Micah, God rest his soul, no excuse. It’s horrible, but he’s homegrown,” Haynes said. “You reap what you sow when you’re the most violent nation on the earth.”

Echoed Dominique Alexander, the head of NGAN: “We should look also at what got him there, and address the issues. What got him there is the failure of our government to serve the veterans,” he said. “They train them to be vicious and then throw them out on our streets.” Johnson, 25, served a tour in Afghanistan before being honorably discharged from the Army.

Before an audience of nearly 1,000 mostly African Americans, the group held two discussions. The first looked at policy changes and things everyone can do to make things better. Ideas ranged from joining nonprofits; attending city council meetings — even when there’s nothing on the agenda — to show numbers and interest; to voting for Republican candidates, when it makes sense to become all-powerful swing voters, and to have a voice in places like Texas, where Republicans have control of most of the government.

“As long as we vote for the same people all the time, we’re not going to have any power,” said Pastor Juan Price.

“Well, not Trump, no,” Price said. “But I’m independent. I listen to the issues, I don’t get caught up in that party stuff.”

But their top recommendation: love. All five people on the panel agreed that the first step to change was “love: that’s what missing in our community. We don’t know how to love each other,” Price said.

The second panel talked about grassroots organizing and included Mark Hughes, the man Dallas police falsely accused as a “suspect” and later cleared, as well as Adrian Taylor, whose 19-year-old son Christian was shot and killed by a Dallas police officer last year. The panel also included representatives from the Nation of Islam, a mental-health group and a Latino group to talk about common areas of interest and bringing many groups together to address problems of criminal-justice reform.

But after two hours of sedate panels, a long line formed full of angry people yelling to be heard. They demanded to know what answers panelists had to stop police brutality, racial profiling and economic disparity. As each fuming questioner refused to be silenced by the moderator, the audience roared its approval.

“We had a community meeting, but we didn’t hear anything from the community,” said La’Shadion Anthony, Dallas Action Coalition. “We were told we can’t effect change in 24-hours. If we stand up all together we can get change … We had a panel about policies but we didn’t discuss any policies.”

The anger and frustration was the same as on Thursday. But this time, when it boiled over, it was thankfully only in raised voices and not a sniper’s bullets. 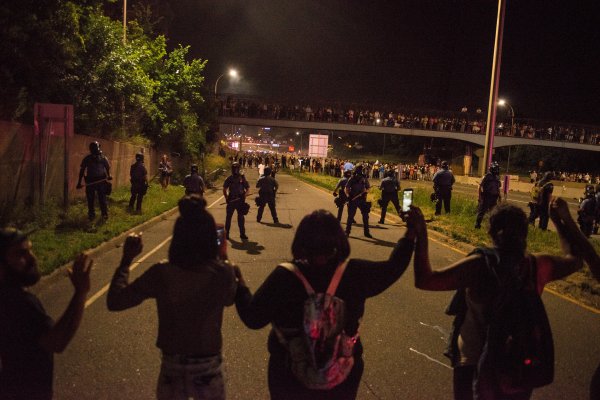