'We Have History': Watching Portugal's Euro 2016 Win From Its Former Colony Macau

Toward the end of Sunday night’s Euro 2016 soccer final between Portugal and France, things got pretty raucous in one part of China’s Pearl River Delta. For those who were awake in Macau, at least (kickoff was at 3 a.m.), Portugal’s victory was a reminder of a shared history stretching back more than half a millennium.

“I don’t even know how I feel right now,” says an ecstatic Pedro Lemos, 32, shortly after the referee’s whistle brings to an end 120 minutes of football that was largely less than thrilling. Until Antonio Éder’s precision strike in the 109th minute, the highlight of the match at Paris’ Stade de France might have been the comi-tragic moment when a moth fluttered onto the face of a tearful Cristiano Ronaldo, just as the star was coming to the realization that he was injured and would have to be substituted early in one of the biggest games of his career.

The quality of play didn’t matter for the folks crowded into a Portuguese language institute attached to the pastel yellow, baroque Portuguese Consulate General building in the historic old town of Macau. Lemos, who plays soccer for a team representing the Portuguese community in Macau, is “filled with emotions” over the win, he says. Portugal, which was the underdog going into the final against hosts France, had never won a major soccer tournament until Sunday. But Lemos says there’s no sense he’s missing out by not being home to celebrate the historic win: “Macau is a good place for it.”

The first Portuguese to land in China, Jorge Álvares, arrived here in 1513. The name Macau is said to be a Portuguese mispronunciation of a Cantonese temple in honor of the goddess of seafarers that sits at the peninsula’s rocky tip. The Portuguese ruled here until 1999, when the tiny territory — home now to about half a million people — was handed over to mainland China.

Lemos, a legal adviser who moved to Macau three-and-a-half years ago after visiting his brother here, is one of an estimated 8,000 Portuguese expatriates who make up a solid community in the former colony. They come to Macau over other cities for its sense of connection to their homeland, they say, as well as economic opportunity. It helps that Macau is awash with cash from the world’s biggest gambling industry, while Portugal has been in an economic crisis since 2010.

Pedro Caeiro, 35, arrived eight months ago to teach Portuguese. There’s still interest in the language as it’s used in Macau’s civil service. “And there’s a connection between China and the Portuguese-speaking countries,” he says, in reference to the role Macau plays in China’s external trade relations, particularly with commodity-rich, Lusophone Angola. Macau’s architecture, and the art and music scenes, give a sense of familiarity, he says. “I wouldn’t say it feels like home, but there’s still a connection,” he adds.

Pedro André, 32, came to Macau two years ago to work as a construction engineer. The casinos — which dwarf those in Las Vegas both physically and in terms of revenues — are rapidly losing steam as a result of a Chinese government crackdown on corruption and capital flight. But there’s still work on a raft of massive casino-hotels still going up in the area known as the Cotai Strip, he says. “After that, who knows,” he tells TIME.

Earlier in Sunday’s game, André confided that he was pessimistic about his country’s chances. “They have better players than us,” he said, as France — led by possible player of the tournament Antoine Griezmann — began to mount attacks. But as the French continually failed to score, hope started to creep in among the Macau crowd. The institute laid on beer — the first four bottles of Super Bock were free — and Portuguese food. The bifanas (pork-chop sandwiches) went down well among the gathered expats, the Macanese (a historic creole community of Portuguese and Chinese origin, with Goan, Japanese, Malay and Sinhalese thrown in), and at least one Vietnamese migrant worker who had come to soak up some of the glory.

“I support Portugal because I like the country, and we have history,” says Chau Pak-kei, 24, a Macau Chinese. “And because I like C. Ronaldo, he’s very handsome.” Chau says although he works as a dealer in one of the casinos, he doesn’t usually gamble. But he’s put a bet of about $12.50 on Portugal to win, just for fun.

When Portugal grab a goal in extra time, the place goes crazy. Most can’t quite believe that they are going to defeat France, the hosts, especially after their team’s middling performances in the early stages of the tournament. They chant “Ro-nal-do!” as the injured star takes up a position on the touchline alongside the coach, his influence now limited to the sheer force of his will. At the final whistle, the Portuguese national anthem gets sung.

“Portugal has waited a long time for this,” says João Nonis. The 20-year-old Lisbon native, whose family hails from another former Portuguese colonial outpost, Guinea-Bissau, came two years ago to study in English in Macau, drawn by its combination of historic ties to Portugal and position on the doorstep of a “rising” China. But as the sun comes up, ushering in another steamy day in Macau, his mind is on the unlikely rise of his soccer heroes. “This is something really special,” he says. “I can’t believe it.” 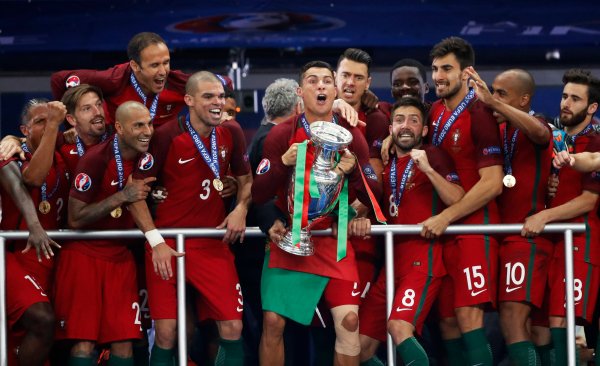