Dallas Police Chief David Brown on Sunday defended his department’s decision to use a robot rigged with a bomb to take down a suspected sniper believed to have shot dead at least five police officers last Thursday.

During an interview with CNN’s State of the Union, the police chief addressed criticism his department has been facing for using the controversial technology, which ended a two-hour long standoff with Micah Johnson. “I approved it,” Brown said. “And I’ll do it again if presented with the same circumstances.”

Dallas police detonated an explosive device known as a “bomb-disposal robot,” while Johnson was holed up on the second floor of a building, laughing and taunting negotiators, Brown said Sunday. The 25-year-old gunman—an Army veteran who acted alone—was killed on the spot.

“He just basically lied to us, playing games, laughing at us, singing, asking how many did he get and that he wanted to kill some more and that there were bombs there so there was no progress on the negotiation,” the police chief said. “And I began to feel that it was only at a split second he would charge us and take out many more before we would kill him.”

Read More: When Can Police Use a ‘Bomb Robot’ to Kill a Suspect?

Brown then told his officers to use “your creativeness to come up with a plan to do it,” he recalled on CNN. The robot, which was attached to about a pound of C4 explosive, likely saved more police officers from being killed, Brown said.

Brown slammed critics, saying he doesn’t “give any quarter to critics who ask these types of questions from the comforts and safety away from the incident.” “I’ve got former SWAT experience here in Dallas, and you have to trust your people to make the calls necessary to save their lives,” he said. “It’s their lives that are at stake, not these critics’ lives who are in the comforts of their homes or offices.”

The suspected sniper appeared to have been planning a larger attack and left a message written in his own blood on a building before being killed, Brown revealed Sunday. Johnson scrawled the initials “RB,” which authorities are working to decipher.

Police also found evidence of bomb-making material “large enough to have devastating effects throughout” Texas and a journal full of “ramblings” during a search of the suspect’s home in Mesquite, according to Brown.

“We’re convinced that this suspect had other plans and thought that what he was doing was righteous,” Brown said, adding that Johnson believed he was going to “make law enforcement pay for what he sees as law enforcements’ efforts to punish people of color.”

The police killings of Alton Sterling in Louisiana and Philando Castile in Minnesota “sparked his delusion” to fast track his plans of “wreaking havoc” on police officers, Brown said. 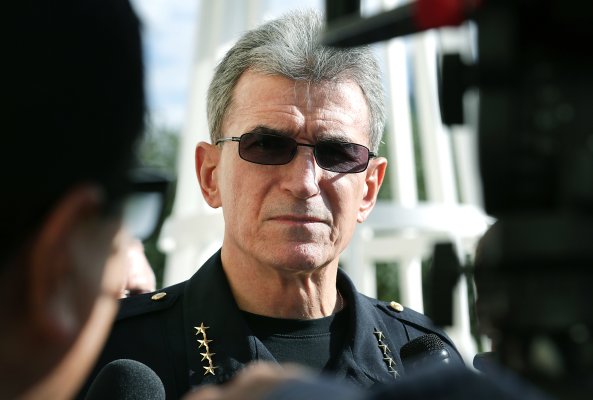