Tavis Smiley: The NRA Means Not Really for African Americans

A vigil at the University of Michigan Diag in Ann Arbor, Mich., in honor of Alton Sterling and Philando Castile, on July 7, 2016.
Katy Kildee—AP
Ideas
By Tavis Smiley

Some years ago, while discussing the National Rifle Association’s opposition to reasonable gun control measures on one of the Sunday morning talk shows, I suggested a simple strategy to test how serious the NRA was about gun rights for all.

I posited, only somewhat rhetorically, that if we really wanted to solve the gun control crisis, we should just arm every black person in America with a concealed weapon.

The silence around the table was deafening. I suspect the very idea of every black fellow citizen packing heat startled if not scared my all-white fellow panelists, the white moderator, and most certainly the overwhelmingly white NRA leadership and membership.

Not that I needed proof that NRA stood for Not Really for African Americans, but the evidence now speaks for itself.

When Philando Castile was murdered in Minnesota, after apparently telling the police officer that he had a gun in the car that he was licensed to carry, the best the NRA could come up with was a statement calling his execution “troubling.”

What’s troubling is the absence of the NRA’s full-throated Second Amendment defense which it rushes to air whenever any questions are raised about a white citizen legally carrying a concealed firearm.

What’s troubling is that it appears that the race of Philando Castile is the primary reason the NRA has toned down its typically vigorous pro-gun frontal assault in defense of all guns under any circumstances.

Republican members of Congress, many of whom take money from the NRA, have been just as tone deaf and complicit in this nauseating non-reaction. House Speaker Paul Ryan continues to delay a vote on gun control measures, saying that the House will vote on a measure “when we’re ready.” SMH. Shaking my head.

Democracy becomes hypocrisy when certain rights are reserved for certain races. How can I put this gingerly? The NRA is a fraud.

The data tells us that more police officers die on the job in states with more guns. Yes, this is about police brutality, and it is about racism, but it’s also about guns, and there’s no way around that incontrovertible fact.

Even President Obama, who has at times been eloquent on the matter of gun violence, carefully calibrated his remarks about the most recent shooting deaths of Philando Castile and Alton Sterling, both black men, but went full bore on the assault against Dallas police officers, calling the attack “vicious and despicable.” He, of course, was right about the latter, but why does he always feel the need to palliate any affront to the humanity and dignity of black life in America? On matters of race, sometimes the president is so measured that it comes across as milquetoast.

We keep treating the issue of gun violence like it’s some sort of political football, when this isn’t even a political issue. It’s a moral issue. And what America is lacking right now is the moral leadership to address a racial divide in our nation that threatens our very democracy.

When black men sitting in their car or selling CDs peacefully can be so callously murdered, and police officers keeping the peace can be picked off by a sniper, then clearly behaving peacefully isn’t good enough to spare your life. Ask Martin Luther King, Jr.

After the assassination of President John F. Kennedy in Dallas, Dr. King said the following: “We were all involved in the death of John Kennedy. We tolerated hate; we tolerated the sick stimulation of violence in all walks of life; and we tolerated the differential application of law, which said that a man’s life was sacred only if we agreed with his views. We mourned a man who had become the pride of the nation, but we grieved as well for ourselves because we knew we were sick.”

America is sick, and we cannot afford to take the tranquilizing drug of gradualism.

When my grandmother wanted me to do something urgently, she’d intone that she wanted it done, “Not now, but right now!”

America, the time is ripe for us to do what’s right.

Not now, but right now. 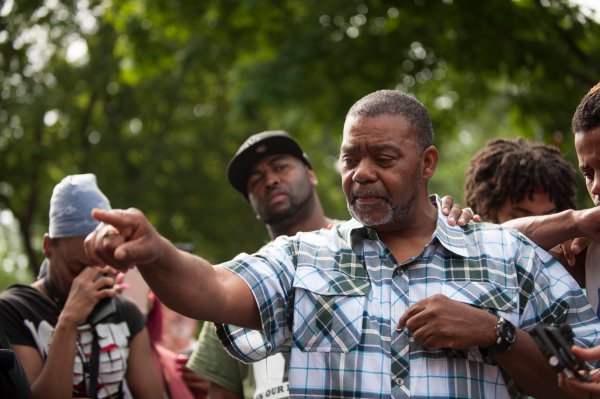 There's a Test That May Reveal Racial Bias in Police—and in All of Us
Next Up: Editor's Pick