Mourners Gather to Remember Philando Castile: 'That Could've Been Me'

A person looks at a memorial in the Minneapolis suburb of Falcon Heights near the spot where Philando Castile was shot and killed by a police officer, July 9, 2016.
Skip Foreman—AP
By Josh Sanburn / Falcon Heights, Minn

The remembrances are written in chalk. Purple, pink, and yellow scrawls. Some are short: “Love all as one.” Others more pointed: “There was a family in that car.” Some serve as almost a warning: “Because this revolution will be on the Internet.”

A few days ago, the sidewalks along Larpenteur Avenue were just a lonely stretch bordering the Minnesota State Fair and the three-story brick Falcon Arms Apartments. Now it’s a makeshift memorial for Philando Castile, who died Wednesday after being shot by police here in Falcon Heights, Minn., following a traffic stop for a broken taillight.

“That could’ve been me,” said Jimmy Mireri, a black 23-year-old who visited the site Wednesday night and worked with Castile at J.J. Hill Montessori School. “Who’s to say that shouldn’t have been me?”

Read more: What to Know About Philando Castile’s Death in Minnesota

Mireri, now a fourth-grade teacher at a nearby elementary school, says he remembers Castile, who worked as a cafeteria supervisor, as “the guy that everyone in the building loved.”

“He worked with children, distributing the food, and the kids appreciated him,” Mireri says. “He was the kind of guy that would always ask how you’re doing.”

On Friday evening, dozens of people visited to lay bouquets of flowers along Larpenteur. A group of 200 from nearby Luther Seminary and Lutheran Social Services walked a mile and a half to the memorial in silence. One woman held a crucifix. Once arriving, the group sang “We Shall Overcome” and “This Little Light of Mine,” lighting dozens of candles and placing them alongside lilies, marigolds, daisies and miniature angel statues. Across the street, birthday balloons hung from the street signs at Larpenteur and Fry. Castile’s 33rd birthday would’ve been next week.

“We have to open our eyes and see that our justice system is unjust, that racism is our original sin,” said Laura Thelander, a pastor at Luther Seminary.

Read more: Minnesota Governor Doesn’t Think Philando Castile Would Have Been Killed If He Were White

Several residents said Friday night that while they were shocked by the video of Castile, which was recorded on Facebook Live in the aftermath of the shooting and has since been viewed millions of times, they’ve witnessed a similar situation just in the past year: the death of Jamar Clark, a black 24-year-old who was shot Nov. 15, 2015, by Minneapolis police. The two officers involved were not criminally charged.

“Surprisingly, I’m not surprised,” says Ashley Aguy, 26, a social worker from Bloomington, Minn., referring to Castile’s death. “But we’re hurting. There’s a lot of pain, a lot of trauma.”

For some, visiting Larpenteur Avenue was a way to make Castile’s death real in some tangible way. Tamiko Robinson, a St. Louis Park resident, says she saw the Facebook Live video initially show up in her feed, but she scrolled past it. She didn’t think it was real, that it was some sort of staged scene. But after she saw Castile’s girlfriend, Diamond Reynolds, on the news, she went back and watched.

“He did everything he was supposed to do, and still his life was taken,” Robinson said. “We’re living in a state of fear.”

As the sun set Friday along Larpenteur’s chalked sidewalks, mourners gathered to pray. They asked for understanding. They asked for an end to violence. They asked for people not to retaliate, like the incident in Dallas, Texas, Thursday, where five officers were fatally shot at a demonstration against police shootings. They asked people to remember Castile, to make sure his memory didn’t wash away. 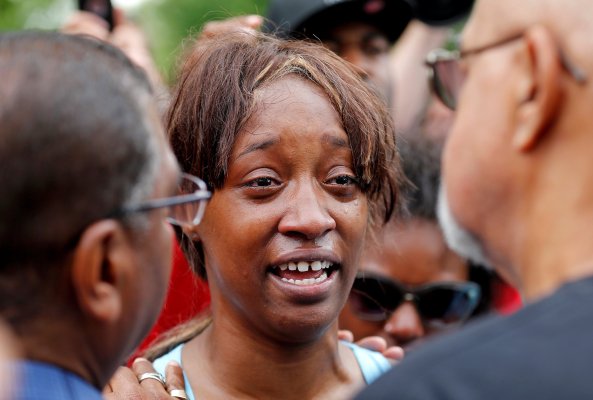 Minnesota Prosecutor Calls for 'Prompt and Thorough' Investigation Into Philando Castile Shooting
Next Up: Editor's Pick