Micah Johnson lived in a two-story brick home overlooking a field in suburbia; a neighborhood that looked like ET might stumble into it under the right moon. But on Friday, the mass of police cars swarming this quiet subdivision wasn’t there for an extraterrestrial; they were searching the home Johnson, 25, shared with his mother Delphene for evidence relating to the attack Johnson allegedly pulled off singlehandedly: killing five cops and wounding seven more at a Black Lives Matter rally one day earlier in Dallas.

The Johnson home, where neighbors said the family lived for at least five years, is at the edge of civilization—a mile or two down the road and you hit cows and farmland. Driving into Mesquite from the city, cookie-cutter McMansions give way to industrial area by the railroad tracks—home to Marazzi, an Italian tile manufacturer, and the Vince Hagan Concrete factory—and then on the other side of the tracks, the homes shrink, though they still have good-sized yards.

Sitting outside the Johnson home on Friday were a passel of kids with bikes, staring at the police and reporters. Curious neighbors walked their dogs, only to get mobbed by the press.

Dee Smith, 47, and her daughter Kendra Smith, 26, were both shocked. Kendra knew Micah at Horn High School. He was, she recalled, a sober, serious young man in the ROTC. But “a normal, good kid,” she says. Johnson served in the Army Reserve from March 2009 until April 2015 where, according to military records, he was a carpentry and masonry specialist. He deployed to Afghanistan between November 2013 and July 2014, which earned him a Global War on Terrorism Service Medal, among other awards, before he was honorably discharged.

Micah could often be seen cutting the grass and tending the lawn. His mother was the friendly one, often stopping to chat with neighbors. According to a Facebook page belonging to a “Delphene Johnson” from Mesquite, Texas, where friends had begun to post condolences, she works at Citibank and before that at God’s Tabernacle of Deliverance, 30 miles away in DeSoto, Texas.

The description neighbors provided of Johnson contrasted strongly with Dallas authorities’ account of his final hours. Police say that after he shot a dozen officers, Johnson continued to threaten the police who had cornered him, offering some rationale for his rampage before he was killed by a police bomb robot.

“They were quiet, normal, God-fearing people,” says Angela Harris, 49, another neighbor. “When the police came her at 2:30 in the morning, I had no idea it could’ve been related to the shooting downtown. I thought it must be something else. But something bad. Because nothing ever happens around here. Maybe someone plays their music too loud and people complain. But that’s it.”

“This is a nice place,” Harris added, before trailing off. “I don’t know why he would’ve been so angry…” 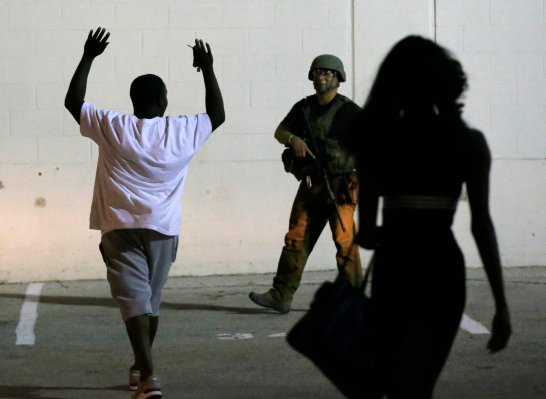