On Thursday, the Herald Sun announced that the character Hikaru Sulu will be revealed to be gay in Star Trek Beyond, which hits theaters July 22. It was welcome news for many who have criticized the otherwise progressive franchise’s lack of LGBT representation since the initial show went on the air in 1966.

But one person disappointed with the news is the person it was perhaps most aimed to please, or at least to honor. George Takei, who played Sulu in the original show and who has been a prominent LGBT activist since coming out as gay just over a decade ago, told the Hollywood Reporter that he has been against revealing the character as gay since he first heard it was under consideration last year.

“I’m delighted that there’s a gay character,” Takei told THR. “Unfortunately, it’s a twisting of Gene’s creation, to which he put in so much thought. I think it’s really unfortunate.” Takei is referring here to Gene Roddenberry, the creator of Star Trek, whom he says was painstakingly thorough in his character development, which included a vision for Sulu as heterosexual.

Takei has been a proponent of LGBT representation in the franchise from early on, when, though he was still in the closet himself, he discussed the idea with Roddenberry. The latter, who had seen the show take a ratings hit after a 1968 episode featuring an interracial kiss, feared that too much boundary-breaking too soon might spell the end of the show.

But Takei didn’t envision it would be his own character who would end the franchise’s streak of LGBT invisibility, and he said as much to John Cho, who plays Sulu in the new trilogy, when they discussed the idea last year. He believed it made more sense to create a new character who has always been gay, rather than bringing Sulu out of a presumed closet. He hoped Star Trek Beyond writer Simon Pegg and director Justin Lin would take this direction and expressed disappointment upon learning that they had not.

Pegg responded to Takei’s criticism Friday morning, telling the Guardian that he respectfully disagrees with the actor’s position. He said that he comes from a place of utmost respect for Takei, and agrees that it’s disappointing that “the screen version of the most inclusive, tolerant universe in science fiction hasn’t featured an LGBT character until now.” But he also expressed a concern, which he discussed with Lin and co-writer Doug Jung, that a new gay character may have been perceived by the audience as a token gay character, “primarily defined by their sexuality.”

Pegg believes Roddenberry’s decision not to develop a gay character earlier was a product of his time, not of his vision. He continued that he, Lin and Jung “loved the idea of it being someone we already knew because the audience have a pre-existing opinion of that character as a human being, unaffected by any prejudice. Their sexual orientation is just one of many personal aspects, not the defining characteristic.” Based on the movie’s timeline, the decision to make Sulu gay does not necessitate his having been in the closet, Pegg explains, and it presumes that there has been an LGBT presence since the beginning of the franchise’s universe.

THR reports that Takei, who has not yet addressed Pegg’s response, isn’t necessarily done with Sulu, no matter the decisions around his sexual orientation. Pointing to Leonard Nimoy’s cameos in Star Trek movies later in his career, Takei says he’s open to the possibility of appearing in the forthcoming reboot of the show, if invited. “There’s no reason why an ancient, wise Admiral Sulu can’t appear, or maybe an alien creature who sounds like me,” he says. “That should be fun.” 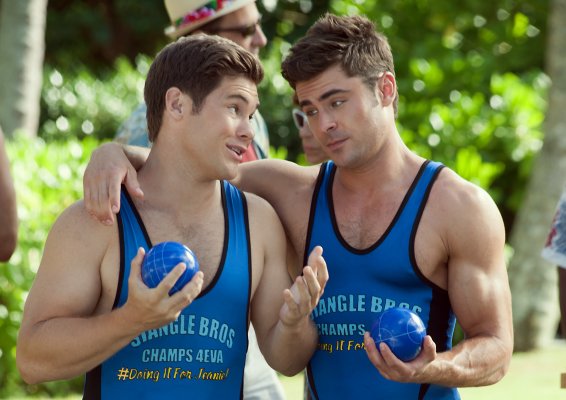 Review: Mike and Dave Need Wedding Dates May Not Be Progressive—Is It Still OK to Laugh?
Next Up: Editor's Pick