Guests wait in line before a campaign event with U.S. Democratic presidential candidate Hillary Clinton and U.S. Vice President Joe Biden in Scranton, Penns. on July 8, 2016, which was postponed "due to the tragic events in Dallas," according to the campaign.
Brian Snyder—Reuters
By Charlotte Alter

Five police officers were killed and seven were wounded when at least two snipers ambushed officers on duty at a peaceful anti-police brutality protest. The protesters were demonstrating against the killing of two black men, Alton Sterling and Philando Castile, by police officers in Louisiana and Minnesota.

Hillary Clinton was scheduled to appear in Scranton, PA with Vice President Joe Biden, but her campaign announced in an email Friday morning that the event was postponed “due to the tragic events in Dallas.” The event will likely be rescheduled.

Donald Trump cancelled a lunch and speech scheduled in Florida for Friday, and issued a statement on the shootings, calling the ambush “an attack on our country.”

“We must restore law and order,” he said in the statement, adding that “the senseless, tragic deaths of two motorists in Louisiana and Minnesota reminds us how much more needs to be done.”

Trump also lamented that “racial tensions have gotten worse, not better,” and called for “strong leadership, love and compassion.” 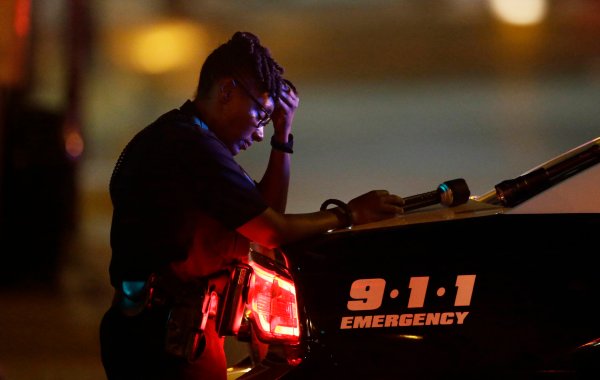 Scenes from Dallas as Peaceful Protests Turned to Horror
Next Up: Editor's Pick