Ramadan. A month of peace and prayer, this year the annual Muslim holiday was punctuated by ISIS violence that grew increasingly intense. These five facts detail the facts behind this year’s particularly bloody Ramadan.

ISIS started off as the nasty, brutish (and shorter) younger brother of al Qaeda. But it’s violent and indiscriminate targeting of civilians—even by al Qaeda standards—proved too much for al Qaeda’s leadership, and it cut ties with the Levant-based offshoot. The Islamic State then tore through Iraq and Syria in the summer of 2014, capturing roughly one-third of both countries (an area equivalent in size to Great Britain) in just a matter of months. It also captured the banks inside this territory, providing a financial haul of at least $700 million that immediately transformed ISIS into the best-funded terrorist group in history.

Read More: The Wave of ISIS Terror Attacks Is a Mark of Weakness—Not Strength

But the Islamic State has seen better days; under intensified attack from many of its enemies, it has lost 47 percent of the territory it once controlled in Iraq, including strongholds in Ramadi and Fallujah, and 20 percent in Syria. Today, ISIS finds itself against the ropes for the first time since its meteoric rise two years ago. That makes the group desperate to prove its continuing power—and paradoxically, even more dangerous.

A suicide truck bomb on July 3 in a Baghdad shopping district killed more than 280 people and injured at least another 200 in the single deadliest attack the country has seen in years. This in a country all too familiar with terrorism—2015’s Global Terrorism Index had Iraq at the top of its list of countries most impacted by terrorism, registering 9,929 terrorist fatalities in 2014. That was the highest number ever recorded in a single country, and dozens more were killed in another suicide bombing on July 6.

But because the world has grown accustomed to violent news from Iraq, these attacks don’t receive the public attention they should, especially as ISIS continues to suffer military defeats at the hands of Iraqi security forces. Planning and executing terrorist acts abroad become much more difficult for ISIS when its back is against the wall in Syria and Iraq; that makes planning terrorist attacks at home more appealing. This is a lesson the civilian populations of Iraq and Syria have learned all too well.

(BBC, Institute for Economics and Peace)

Read More: How the Russian Fighters of ISIS Became a Terror Threat in Turkey

But while ISIS struggles at home, the ISIS brand has never been stronger abroad. It helps that drawing the line between ISIS ‘inspiration’ and ISIS ‘direction’ is not always so clear-cut.

Take the café attack in Dhaka, Bangladesh over the weekend. Six affluent, well-educated Bangladeshis stormed the Holey Artisan Bakery, taking hostage 35 people before killing 20 of them. Among the victims were nine Italians, seven Japanese, one Indian, and one American. They reportedly forced hostages to recite verses from the Koran—those who failed were tortured and executed.

While ISIS was quick to claim credit for these religious extremists, posting photos of the assailants and their noms de guerre on an ISIS-affiliated website, the Bangladeshi government sought to downplay the ISIS connection, preferring to blame homegrown radical elements. Not that it matters to ISIS or its brand—they got what they wanted.

Attacks in places like Bangladesh are targets of opportunity; attacks in places like Turkey have become personal for ISIS. The latest, at Ataturk Airport on June 28, involving both a bombing and a shooting spree, killed 45 people and wounded hundreds more. Since 2015, there have been roughly a dozen attacks linked to the Islamic State in Turkey.

It’s easy to see why ISIS targets Turkey. Its border with Syria makes the country accessible. And when the jihadist group first began to rise in neighboring Syria, the Turkish government may have turned a blind eye to thousands of ISIS recruits passing through Turkey into Europe, creating ISIS cells inside Turkey itself. Turkey may also have served as a black market for ISIS goods. But as international pressure on Turkey’s government mounted, Ankara was forced to tighten its borders and contribute to the international war effort. That gives ISIS a motive for retaliation. Finally, geographically and culturally, Turkey is the bridge that links the Muslim world to the West. That’s a bridge ISIS would like to blow up.

But it’s the way Ramadan ended that has shocked people across the Muslim world. With a series of suicide bombings, ISIS hit three sites inside Saudi Arabia. While two of the suicide bombs—one outside a Shia mosque and another near the U.S. consulate in Jeddah—failed to kill anyone other than the bombers themselves, a bombing in Medina, one of Islam’s holiest sites, claimed the lives of at least four people in addition to the bomber

It’s no surprise that ISIS targets Saudi Arabia—Islamic radicals have long viewed the Saudi royals as allies of the West. In fact, the attack on Medina was the fifth ISIS-related attack in the Saudi Kingdom since September 2014. But the Medina bombing targeted the Prophet’s Mosque, the burial place of the Prophet Muhammad and one of the holiest sites in Islam. It’s a signal that ISIS holds nothing sacred. ISIS has officially turned the corner from “Islam vs. the Infidel” to “ISIS vs. Everyone.”

What does the future hold? ISIS the caliphate will weaken and then fall. ISIS the brand is only beginning its expansion. 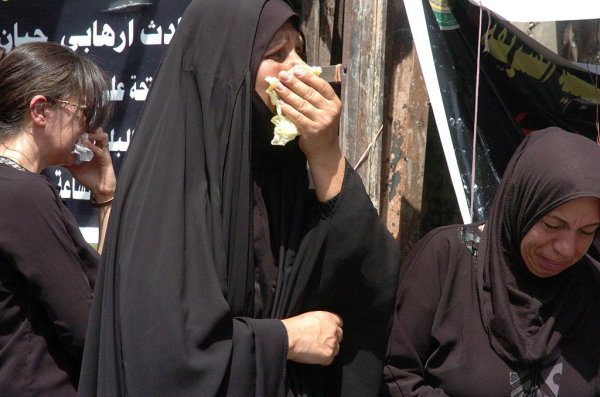 The Wave of ISIS Terror Attacks Is a Mark of Weakness—Not Strength
Next Up: Editor's Pick